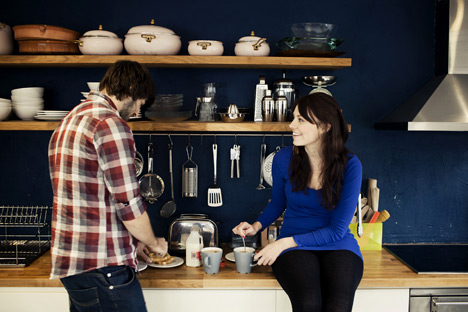 Jennifer Eremeeva talks about kitchen debates with her husband, transactions of moving money from big banks to smaller ones and solidarity with the Occupy Wall-Street movement.

HRH (my “Handsome Russian Husband”) and I go through a quaint ritual each Sunday night in Moscow: I cook something nice, and we settle down to watch Vesti Nedelyia, Channel 2’s weekly news round-up program. To my way of thinking, there isn’t a lot of news in it, unless you count a national costume festival cum reindeer race in the Republic of Komi as news, which I don’t, and if pressed, neither does HRH. If you had to rely on this crowd for real news, you’d be in big trouble. I get most of my news via podcasts, which I download and listen to while I’m cooking.

“I feel we should move our money,” I said to HRH during a commercial break, as we tucked into a stir-fry, assembled during a love fest between Rachel Maddow and Michael Moore, which had brought me up to speed on the Occupy Wall Street developments.

“Move it where?” asked HRH, who associates moving money with armored vehicles and a couple of dropouts from the Russian army with buzz cuts and ear pieces.

“It’s an Occupy Wall Street thing,” I explained, “yesterday, they encouraged everyone to move their money from big banks to smaller local savings and banks or credit unions. I think we should do it.”

“Why would we want to do that?” asked HRH. “We are VIP clients at our bank. I don’t want to move.”

“We need to stand in solidarity with the 99 percent,” I explained patiently. “The ones who aren’t VIP clients at their bank.”

“Dar-ling,” I said patiently, “the 99 percent are the good guys. It’s the Wall Street fat cats who are the bad guys. The protesters are trying to introduce a financial transaction tax to level the playing field.”

“Fantastic,” said HRH, raised in the best Marxist-Leninist tradition. “We had that political system - Communism. Didn’t work out too well. You can’t think a financial transaction tax is a good idea.”

“What do I look like to you - the short stop of the Citigroup softball team?” I retorted. “It’s a teeny tiny tax - like 1 percent of 1 cent on every dollar for these gazillion dollar transactions: Mergers & Acquisitions and stuff like that.”

“And where would the money go?” asked HRH.

He had me there. Rachel and Michael were for it, as was Obama, so it must be a good thing.

“It’s…well, it’s designed to ultimately benefit the global…you know, poor,” I argued meekly. “Listen, Bill Gates and the Pope are in favor of it.”

“Bill Gates can afford it,” said HRH, “and I thought you said the Pope was a male chauvinist.”

Vesti Nedelya resumed in the nick of time, with an update on Boris Berezovsky’s attempt to sue Russia’s richest oligarch, Roman Abramovich, for $5 billion over some oil shares. HRH grimaced, feeling as many Russians do that this is too much dirty laundry hanging on Britain’s clothesline. “How does this transaction tax work again?” he asked.

Jennifer Eremeeva is a  freelance writer and longtime resident of Moscow. She is the curator of the culinary blog, www.moscovore.com, and the humor blog www.russialite.com.