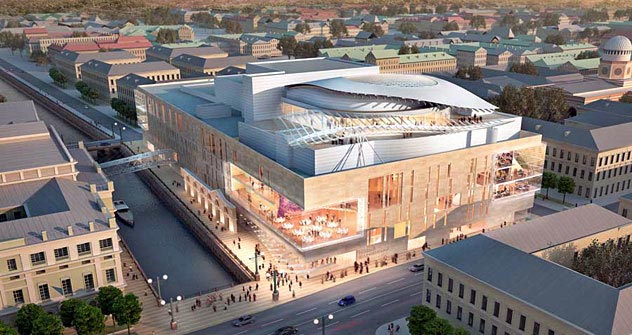 While audiences anticipate the construction of the Mariinsky Theater's second stage, the urgent need of repairing its old building has become more pressing.

The new stage has had a swinging door of architects and planners. Finally, it seems, a design is in place. Renovating the old Mariinsky—not that’s another story.

There is a certain and enduring magnificence to the Mariinsky Theater, but the historic cultural center of St. Petersburg is now facing complicated 21st-century challenges of aesthetics and space.

Audiences have been anticipating the construction of a second stage, and the need to refurbish the old building has become more pressing. Both problems are particularly galling to devotees in contrast with last month’s triumphant opening of the Bolshoi Theater. After a decade, the Bolshoi has sorted out its venues, while the Mariinsky, after 10 years, has not.

The decision to build the new stage was made in 2002 and taken to the federal level. Eric Moss, winner of the Gold Medal of the American Institute of Architects, was commissioned to work on the project. Unfortunately neither the client nor the public was ready for his extravagant design. The theater management wanted the old and new buildings to be linked by a bridge across the Kryukov Canal, with the hope that scenery could be moved easily from one to the other. Moss fixed the old and new stages at different levels, which made it impossible to move the scenery across quickly. Some said that the crumpled shape of the design gave the impression that the city was pressing down on it, as if the surrounding area were trampling it down.

Moss did not accept the idea that he failed to connect with Russian architectural traditions. “The link with the Russian avant-garde and with Russian Constructivism is a fundamental element in our work,” he said in an interview. The theater “is always an event in the city, it is always the spirit of experiment, always something extraordinary,” he added. Ultimately, Russians could not appreciate the design, but it was a hit at the Architectural Bienale in Venice, and the buzz added to the fame of the already distinguished architect.

American architect Eric Moss was invited to work on the project of the Mariinsky's second stage in 2002. Click to watch the video. Credit: Eric Owen Moss

After getting rid of Moss, the Mariinsky held an international competition for a new venue. The winner, Dominique Perrault, was announced in 2003. Perrault proposed to cover the building with a futuristic golden dome. After part of the historic quarter was demolished, including the eighteenth-century Litovsky Market building and the Palace of Culture built during the First Five-Year Plan in Stalin’s era, construction work began.

Construction dilemmas appeared, however, preventing Perrault’s concept from becoming reality. Instead of a golden dome, there was increasing talk of a “golden” pit dug beneath the second stage construction site, which had already swallowed up a whole pile of money without any visible results.

After five years it was finally alleged that the French architect’s design did not comply with Russian construction standards, although many agree that the non-compliance was purely bureaucratic.

Perrault’s services were dispensed with and a tendering process for a new design was announced.

The tender went to the previously unknown firm High-Rise and Underground Structures Design Bureau (HRUS DB), which had earlier been given the design work for the theater’s foundations. The group teamed up with the Canadian architectural firm Diamond & Schmitt Architects. Their portfolio doesn’t include any remarkable architectural projects, but it does feature the Four Seasons Center in Toronto, an opera house with solid acoustics.

Their acoustical know-how is what Valery Gergiev, artistic director of the Mariinsky, took a liking to. But the press continued to have a good time. While Moss’s design was called “bags of rubbish” and Perrault’s effort “crumpled foil,” the Canadians’ proposal acquired a much less romantic name – a “supermarket.”

Costs of construction have risen greatly in the last decade, but no one ever seemed in a terrible rush.  The new building is now slated to open by autumn 2012. The good news is the end of the construction project is now in sight, and the Mariinsky Theater will get a second stage, albeit not as beautiful as it could have been. As soon as the new stage is open, the theater will face another challenging test – restoring the old building. We can only wish it more success than it’s had with the new stage.