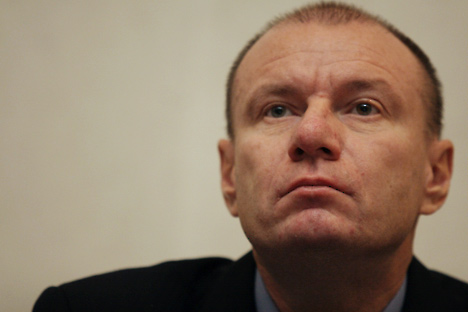 On Dec. 1, the John F. Kennedy Center for the Performing Arts in Washington, DC announced a $5 million gift from well-known Russian investor and philanthropist Vladimir Potanin.

The Kennedy Center Golden Circle Lounge, located on the Box Tier level of the Opera House, will undergo an extensive renovation this summer, funded by the Vladimir Potanin Foundation, and be renamed the Russian Lounge upon reopening in fall 2012.

“We are very grateful for this generous gift from Vladimir Potanin,” said Kennedy Center Chairman David M. Rubenstein. “Russia’s cultural heritage has enriched the Kennedy Center’s programming on countless occasions, including multiple performances by the Mariinsky Ballet, Opera and Orchestra and the Bolshoi Ballet, as well as the 17-year tenure of Mstislav Rostropovich as music director of our National Symphony Orchestra. I applaud Vladimir Potanin’s leadership and admirable philanthropy, which will help enable the Kennedy Center to continue its mission of presenting the best of national and international artistry to our audiences.”

“This is such an honor for me to make this gift on the 40th anniversary of The John F. Kennedy Center,” said Potanin. “I believe the Kennedy Center has been playing a very important role in building strong cultural relations between our countries by presenting the greatest Russian artists to the American people. I’m very grateful for Kennedy Center Chairman David M. Rubenstein’s continued support to the Russian Lounge project that we launch today and that is aimed to open new dimensions of Russia to the public. I believe that our cooperation with the Kennedy Center is a natural expansion of the philanthropic activities that we carry out in Russia.”

The lounge will undergo a comprehensive update, including new wall coverings, floor finishes, and service bar. Upgrades will be made to lighting, electrical, and plumbing systems and new Russian artwork and furnishings will fill the room. The Russian Lounge design will be based on the findings of two of the Potanin Foundation’s programs: “First Publication” and “A Changing Museum in A Changing World.” Both programs present unknown, under-researched aspects of Russian culture, open unknown museum collections, and present museum collections in a unique printed form. The renovated lounge may include a multimedia zone to highlights Russian culture and museums, as well as feature unique museum collections from the foundation’s archives.

Russian designer Yuri Avvakumov of AgitArch will provide interior design and layout while Baltimore-based Richter Cornbrooks Gribble, Inc. will provide overall architectural design support. Construction will begin in summer 2012 and the new lounge will be unveiled at a grand reopening celebration in the fall.

The Russian Lounge will be the Center’s fourth lounge dedicated to a country or region of the world.

As a $5 million donor to the Kennedy Center, Potanin’s name has been carved into the marble at the entrance to the Hall of Nations for philanthropic leadership. Potanin joins such generous donors as the HRH Foundation, Jacqueline Badger Mars, David M. Rubenstein, Stephen & Christine Schwarzman, and Roger & Vicki Sant.