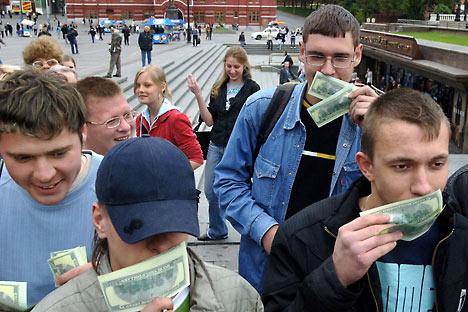 When flash mobs first came into being, they were a spontaneous gathering to do something fun. Not any more – at least not in Russia. Here, due to a lack of fresh ideas and stiff legal restrictions on gathering in public places, both the government and the opposition have adopted the original flash mob concept as means of furthering political goals.

A group of about 50 people were standing on the platform waiting for a train to arrive from Moscow. They held signs reading: “Tatiana Lavrukhin, Alcoholics Anonymous.” One of the people in the group was third-year humanities student Dmitry Lapshin, who came to the event with his friend Alexei Ikonnikov. Both remember staring into the distance with serious expressions on their faces. “Flash-mobs must have been invented with Russia in mind,” said Lapshin. “Pointlessness and absurdity are very Russian characteristics!”

A group of about 50 people were waiting for a passenger by the name of “NzR178qWe,” who was expected to arrive on a train from St. Petersburg. The bewildered station attendants watched the crowd gather, not quite believing their eyes. “They’ll soon get used to it,” predicted David Young, organizer of one of the first flash mobs in Russia. “This sort of thing is happening all over the world nowadays.”

The joint action in Moscow and St. Petersburg took five days to organize. Those taking part in the Moscow flash mob had initially planned to greet “Volodya Putin,” due to the fact that St. Petersburg is the then-president’s hometown, but the participants decided against this and ultimately changed the name on the signs that they were holding.

In 2003, David Young was doubtful flash mobs would ever catch on in Russia. Now it seems that you can’t avoid them. Lapshin and Ikonnikov are no longer involved in the flash madness – and not just because they have grown from students with a lot of free time into adults with steady jobs. “These days you can’t even have a nice peaceful evening out at the theater – a flash mob will appear out of nowhere, or the whole thing will turn into some sort of political rally,” they said.

The organizers of Russia’s first flash mobs had no intention of making a political statement; but inevitably political motivations were read into the meetings. Seven years after those peculiar welcoming committees began appearing at either end of the Moscow-St. Petersburg railway line, flash mobs promoting the United Russia political party have begun springing up all over the country. The ruling party is organizing them in a bid to increase its ranks and become associated with young people and popular movements. On the other end of the political spectrum, the flash mob has become an accessible form of protest in a country where traditional means of expressing political dissatisfaction, such as rallies and demonstrations, have either ceased to have any meaning or been thwarted by the threat of police intervention. According to current legislation, social protests can go ahead only if approved by the powers that be. A flash mob is much simpler: people just show up.

Several thousand people hold tangerines in the air, chanting “Boos – Step down!” (referring to then-Governor Georgy Boos) and “Out with the government!” Many participants covered their faces in bandages, drawing attention to the lack of free speech in the country. Supporters of the opposition held signs with a bead crossed out and the slogan “Stop United Russia!”

Twenty photographers employed by several international photo agencies in addition to some of the largest Russian publications organized a photo shoot on Red Square using flashlights and an array of professional equipment. They took photos of each other and the Lenin Mausoleum in protest of the photography restrictions that are in effect throughout many parts of the Russian capital.

In one of the famous Thrill the World events, just under 300 flash mobbers performed a dance to Michael Jackson’s “Thriller,” in memory of the artist. A ring of police officers surrounded the dancers by a ratio of approximately one policeman to every two participants. “This is their idea of a social revolution,” grumbled one policeman. “Revolutionaries are two a penny these days. If they want to do something positive they’d be better off joining the police.”

According to Article 31 of the Constitution of the Russian Federation, mass gatherings in public places are completely legal. A spontaneous gathering of people does not qualify as a political rally, a street march, or a demonstration, nor can it be seen as picketing. However, in practice, the police keep a very close eye on gatherings like this and will demand to see participants’ documents at the first onset of trouble.

“When you take part in a flash mob in Russia, you are always told to bring your passport with you just in case, and if anyone asks anything, you just plead ignorance. It’s a case of every man for himself – no one is going to step in and save you. The cops sometimes get angry, and I have spent several nights in a cell,” said Alexei Ikonnikov.

The whole idea of flash mobs may never have been possible were it not for the Internet.

“The whole Runet/flash-mob boom was sparked by one simple incident,” said Dmitry Lapshin.  “One day a girl was eating a hot dog in one of those private courtyards, and she was then beaten up and kicked out by security guards. Afterwards, she described what had happened in a blog, and people decided to support her by staging a peaceful protest. There were a lot of us; we all bought hot dogs, went to the ill-fated courtyard, settled down and started to eat. We soon forgot about the original catalyst for the event, but the idea of gathering in certain places and doing something bizarre took hold – it was fun.”

But free forms of expression have never lasted long in Russia; they have either been shoehorned to fit within the boundaries of the law, moral values and good taste, or been co-opted by the authorities to further their agenda. Therefore it should be no surprise that flash mobs in Russia have become organized and contained. This year the first flash-mob school appeared. People travel there to learn about the history of flash mobs and various flash-mob scenarios, past and present. Students are taught the best ways to publicize a flash-mob event. The school also has teachers specializing in law to explain the legal ins and outs of a gathering, as well as journalists and PR experts to teach flash mobbers the best ways to interact with the media and the government.

Opinions vary as to the future of flash mobs in Russia, but one thing is certain: The flash mob in its original form is no longer possible. In addition to all the political flash mobs that are now something of a regular occurrence, a large number of commercial flash mobs have also sprouted up. In these gatherings, participants are paid to gather and advertise the products of various companies.

Occasionally Ikonnikov and Lapshin like to reminisce about old times. Now they sometimes watch video clips of the new breed of flash mobs and follow flash-mob forums. “On one of these websites someone wrote: ‘the frightening thing is not that it’s a crowd – it’s more the fact that it’s an intelligent crowd,’” said Ikonnikov. “In the beginning, this was probably really the case. But these days the only intelligent person in a flash mob is the one who organized it. We can only hope this person truly is intelligent and knows what he or she is doing.

“The same applies for flash mobs as it does for any other structure. Some people think of flash mobs as a form of ‘zombification,’ but I would say that almost everything in today’s world could be described as ‘zombification’ – advertising, art, and the law. If we really are already zombified, then surely it’s better to dance the funky zombie dance at a Thrill the World event than sit around watching TV.”