An exciting end to a dull election 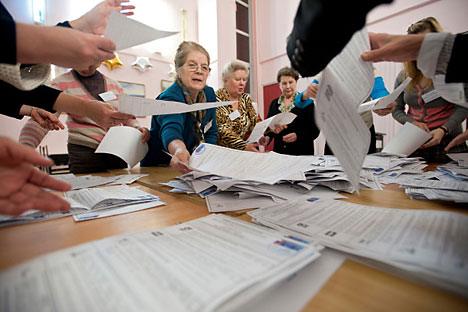 The State Duma elections this time around were actually quite interesting, despite a sluggish start in which campaigning from all parties lacked vigor and went largely unnoticed by the public. Interest in the elections began rising sharply by the end of the campaign after the Kremlin suddenly became visibly nervous about United Russia’s falling ratings.

The authorities were even more concerned about the possibility that popular protests might break out after the elections. That would explain why the authorities cracked down on the Golos election-monitoring group and detained Left Front leader Sergei Udaltsov and activists from The Other Russia. It would also explain their decision to mobilize 30,000 members of the pro-Kremlin Nashi youth group, if necessary, to cordon off the central squares in Moscow.

For all its vapidity, the campaign served as a type of primary for United Russia. It also served as a venue for bargaining between the federal and regional political elites and for debates that, despite the lack of participation by top United Russia officials, provided a forum for increased and varied criticism of the ruling authorities.

The campaigns for 27 regional parliaments held simultaneously with the federal drive also added some intrigue to the Dec. 4 elections. Having successfully replaced all of the heavyweight governors, the Kremlin was left without any big names to run on the United Russia ticket in the regions. That is why deputy prime ministers and other Cabinet ministers headed one-third of all party lists in place of governors.

Indeed, the regional factor played a greater role in these elections than ever before. United Russia fared fairly poorly in a number of regions, and although that will not change the overall picture, it will surely add to the ruling party’s troubles and humiliation.

The fact that the authorities did not obstruct independent elections observers from the Organization for Security and Cooperation in Europe could be indirect evidence that they had no concrete plan for widespread election falsifications, as many had expected to boost United Russia to the much-desired 60 percent level. At the same time, however, the Kremlin clearly overreacted with its heavy, crude attack against Golos.

Another positive aspect of these elections is that this is probably the last hoorah for a whole group of United Russia apparatchiks who need to be replaced with more energetic and innovative politicians. More important, this could also mark the end of the primitive and ineffective political system that Putin built back in the pre-crisis days when the Kremlin had so much money and power that it all but dictated conditions in the Duma. But it is clear that the current political system will now have to give way to a more pluralistic one in which the Kremlin and United Russia will have to compromise and build coalitions with the three other parties in the Duma.

More important than the mere redistribution of Duma seats orchestrated by a dominant United Russia is the palpable shift in mood. Increasing numbers of people are venting their frustration with the ruling regime through protest votes that are reminiscent of the elections of 1989-90. Today, we have woken up to a fundamentally new political