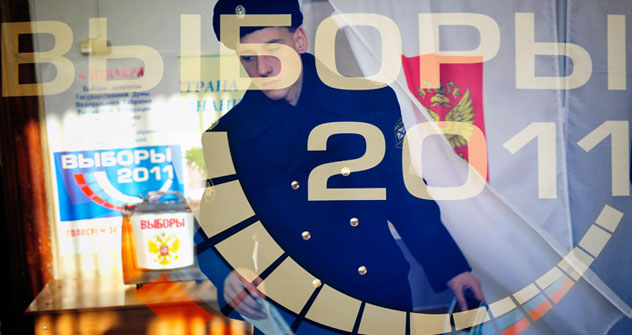 Although United Russia failed to win the constitutional majority in the State Duma, bloggers and observers are suspicious to the results of the elections. Source: RIA Novosti

Russia’s parliamentary elections have observers divided in their assessments.

The day after the State Duma elections, protestors took over central Moscow, claiming that the results of the elections were falsified, despite the fact that the United Russia party failed to get a constitutional majority. Near the Chistye Prudy metro station, a rally brought together between 5,000 – 7,000 people. Although the event was sanctioned by the authorities, it resulted in clashes with police officers and mass arrests.

While Russian Present Dmitry Medvedev has stated the election were “absolutely fair and just” and claims that United Russia got as many votes as it had supporters – “not more and not less” – but many observers both from Russia and abroad are skeptical. Some of them expressed their indignation not on the street, but in their blogs.

“Personally, I was very disappointing to witness how the ‘real votes’ were falsified by polling stations’ officers,” wrote Petryagina_d in her blog on LiveJournal, the country's main platform for uncensored political discussion. “You know, the real thieves and crooks are among authorities, of course. But it is ordinary people around us who encourage officials to abuse power by putting over in silence the fact of falsification.”

Politics in Russia is reborn

“On Dec. 4, 2011 polling station officials orchestrated the ‘Mafia’ game, in which only one man is honest in the country while the rest of the citizens are gangsters,” said another LiveJournal user, Diary-of-lena-p. She also added that in its attempts to win the constitutional majority United Russia used dubious methods such as ballot box-stuffing, voting multiple times and preventing observers from monitoring the elections by keeping them out of the polling stations. One supporter of the Yabloko party complained that they were barred from moving in the polling station. “Nevertheless, it was very valuable experience,” the blogger said. “After monitoring the elections over 24 hours, I don’t want to leave Russia – only because I want to do my best to force those mean officials to get out of the country.”

Regardless of many complaints about the 2011 elections, others admitted that they witnessed no violations. “I’m very glad and lucky that I worked at a polling station where everything was clear and transparent,” livejournal blogger Bez-nicknama said. “I’m pretty sure for every vote, for every ballot, for every signature. We couldn’t tear ourselves from the commission when it counted box ballots. The polling station officials tried to bar us from monitoring, but we didn’t yield and kept watching. That may be the reason why they didn’t make any attempt of ballot stuffing. I believe in these results. And it is very important for me. Now I know that some people can make their own choice.”

Likewise, Western observers have been divided in their assessment of the elections. Although they view the elections as unfair, they haven’t actually said that Russia’s parliamentary elections failed to meet international standards. Tiny Kox, a Dutch lawmaker who led the mission of the Parliamentary Assembly of the Council of Europe said in an interview with “The Moscow Times” that he witnessed a clear instance of ballot box-stuffing at a Moscow polling station. "There was a stash of folded ballots inside the box after it was opened for counting, and the station's head frantically tried to hide it from me," Kox told reporters.