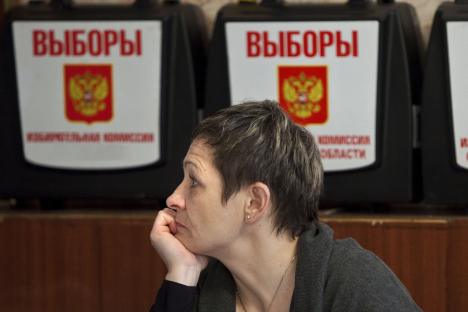 Do most voters find the election process boring? Source: AP

While news reports are full of violations and opposition protests, the election experience for most voters was almost boring.

It is just above freezing, damp and windy. I am waiting for a taxi to take me from my home in Khimki outside Moscow to the Children’s Art School, where my polling station is located.

In Russia, every voter is tied to his place of residence and can only vote where he is registered with the immigration service or the police, however this address is often not the place where the person actually lives.

My neighbor found himself in a funny situation. Because he had moved, he was officially a person without a fixed residence – a bum. All those with no fixed address had to vote at the Central Telegraph Office in the center of Moscow, where the polling station featured a line of “bums” in smart suits carrying smartphones.

“Have some business there?” the taxi driver asked me on our way to the school. “It’s election day,” I replied.

“Elections to the State Duma,” I said.

“Ah, they’ll decide everything for us anyway,” he replied, before snatching a crumpled banknote from me and stepping on the accelerator.

The Children’s Arts School is housed in what used to be a big movie theater. The tables of the election commission members and the polling booths and ballot box are on the stage. The rows of seats are occupied by a policeman, a man from the Emergency Situations Ministry and several observers, including from the United Russia party. Voting proceeded calmly, and many of the observers were dozing. Not even the most common violation of electoral rules, such as the ejection of observers or a ban on taking photos and videos, seemed to be occurring. The camera installed in the hall recorded everything going on.

Waiting for my ballot to be issued, I scroll through Twitter. Many Internet sites were attacked by hackers during the elections and were not working, so the social networks were the only source of information. Polling stations had already closed somewhere in the Far East of Russia; in the Urals, passers-by had stopped a bus that was delivering young people to polling stations and, in Moscow, a journalist I knew had stopped an attempt at ballot-stuffing.

“I don’t know who needs all these violations,” wondered a member of the election commission on his Twitter feed. “All the irregularities, if any, happen at city and higher levels. This year, we were told to relax because there would not be any violations.”

Electoral irregularities are a constant headache for the members of local election commissions. Most of them are schoolteachers manning the polling stations at their own schools. They are paid to work on precinct election commissions and are thoroughly briefed before every poll, sometimes even twice.

“Almost 100 percent,” she lied inexplicably, as she tried to hide the sheet of paper where the names of the voters who show up are checked off. The day is drawing to a close, and half of the registered voters have yet to come. It’s easy to sympathize with them. To begin with, Russians are apolitical because, like my taxi driver, they do not believe in the electoral process and, second, the weather in Khimki is wretched. There was a snowstorm howling outside all morning and the streets were deserted.

I am issued one ballot paper and my girlfriend four. She is registered in Khimki and she is to vote for deputies for the Moscow Region Duma and the Khimki council. One of these elections requires two ballot papers and it’s easy to get mixed up. Sighs are heard from the voting booths.

I wait for my turn and read the exit poll results. United Russia gets through everywhere, but fails to win a constitutional majority. I think of the Duma in the 1990s with its scuffles, crises and political passions. I look at my phone and see that hackers have broken several more news sites.

Elections in 2007, despite some success by those who organize the Dissenters March and fresh memories of the Orange Revolution in Ukraine, were not so tense.

On the Internet, there are reports of opposition protest rallies in Moscow, but Khimki is quiet and deserted.

I turn on my TV at midnight. Most channels are carrying live reports from the headquarters of the parties and the Central Election Commission. Politicians share their thoughts about the elections and the CEC members are summing up the preliminary results.

The final results will not be announced until Dec. 24, however, if interim results are anything to go by, only four of the seven parties will make it to the Duma: United Russia, Just Russia, the Liberal Democratic Party of Russia (LDPR) and the Communists.