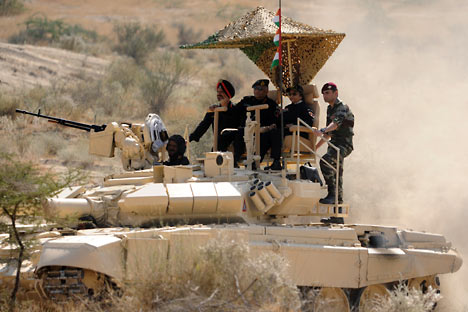 Earlier, president flew in an Indian Air Force VIP jet from New Delhi to the Utarli airbase near here. She was then taken in a Mi-17 transport helicopter near the venue before riding in the tank.

Later, addressing troops practicing new battle concepts to transform into a "lean and mean" war-fighting machine, Patil, the supreme commander of the armed forces, told the Indian Army to modernise to beat threats from adversaries.

"The country today is faced with multi-dimensional challenges and the army has to measure up to these threats to our national security.

"We need to accordingly equip ourselves with state-of-the-art weaponry and hone our skills through relentless training to deliver the required response to our adversaries when the need arises," Patil added.

The exercise is led by the Bhopal-based 21 Strike Corps, one of the army's three such sword arms.

More than 50,000 troops and over 200 main battle tanks like T-90s, T-72s and the indigenous Arjun, as also infantry combat vehicles, are participating in the exercise, which also features fighter jets, transports and helicopters of the Indian Air Force (IAF).

The army demonstrated its capability to strike at enemy targets in a swift tank battle as MI-35 attack helicopters provided aerial and tactical support to the troops on ground.

In 2009, Patil had become the first Indian woman head of a state to fly in frontline Sukhoi-30 MKI fighter jet aircraft from an IAF base in Pune.

Patil was the second Indian president to fly in a fighter aircraft after APJ Abdul Kalam in 2006.