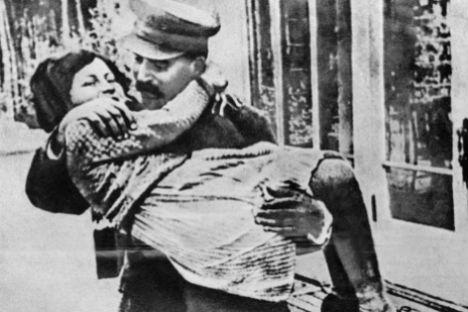 Joseph Stalin with "his little sparrow"

When the news spread last week about the passing away of Josef Stalin’s last surviving child, Svetlana Alliluyeva, there was a buzz among the members of the generation at the helm of power in India in the 1960s. Alliluyeva, who was called “my little sparrow” by Stalin, was responsible for a set of events that looked like they were right out of a James Bond film.

Prisoner of the name

Alliluyeva, who visited India several times over the span of her lifetime, was in a romantic relationship with Brajesh Singh, an Indian communist, who lived in the Soviet Union. Singh, who hailed from a royal family in Uttar Pradesh, was drawn to communism in the 1930s. The Soviet authorities were opposed to the relationship and did not allow the couple to marry but they lived together in Sochi until Singh’s death. Stalin’s daughter cited the poor treatment meted out to Singh, as one of the reasons for her controversial defection to the West.

Singh’s death in October 1966 triggered a series of events that shook the foundation of the rock- solid diplomatic relationship between India and the Soviet Union. Singh, who Alliluyeva referred to as her husband, was cremated in the Soviet Union. On hearing of Alliluyeva’s plans of going to India to immerse Singh’s ashes  in the Ganges, Alexey Kosygin tried to dissuade her, citing ‘sati,’ an old custom in certain parts of India, where a wife would be expected to throw herself on the funeral pyre of her husband.  He claimed that her life would be in danger from villagers in Singh’s ancestral village. Rejecting these fears, Alliluyeva went to India two months after Singh’s death. She described her lover’s village near Allahabad to the New York Times as “paradise.”

Although she was staying as a guest of the ambassador in the Soviet embassy in New Delhi, she approached Indian authorities for permission to remain in the country. “This was a time when India was tilting towards the USSR and it was impossible for us to grant her any kind of asylum,” said a retired bureaucrat, who was working for the Indian Ministry of External Affairs.  “We couldn’t jeopardise our relationship with the Soviets,” said the retired official, who wanted to remain anonymous over worries that he could be charged under an official secrets act.

Alliluyeva stayed in India for another 3 months and when it was clear to her that India would not grant her requests to stay back indefinitely, she took the drastic step of approaching the United States Embassy in New Delhi.

According to her memoirs, Alliluyeva told Soviet Ambassador Nicholai Benediktov that she was making her final travel arrangements for the USSR and took a taxi from outside the Soviet Embassy directly to the US mission. The embassy was closed for the day, but Alliluyeva, who was fluent in English, convinced the officer on duty to contact the American ambassador to India, Chester Bowles.  In order to ward off any potential Soviet accusations against the Americans, the ambassador demanded in writing, her request to defect. “The Americans were totally mum on the request, until she was quietly whisked away to Europe,” the retired Indian official said. Bowles offered Alliluyeva political asylum.

Alliluyeva was escorted by a CIA officer out of India to Rome, from where she travelled to Geneva, where she received a tourist visa for the United States. “The pressure would have mounted on us to expel her from India to the USSR, if she stayed longer,” the retired bureaucrat said. “We had to turn a blind eye towards her departure to minimise the damage in our relations with the Soviet Union.” He added that India would look like it was turning its back on Nehruvian principles of granting asylum to those who were oppressed in their homeland.  “But we couldn’t deport her to the USSR either.”

The news of Alliluyeva defection to Geneva was made public by the American Mutual Radio Network. “We had to bear the brunt of Soviet anger for a while, but relations returned to normal after India refused to condemn the 1968 Soviet invasion of Czechoslovakia during the Prague Spring.” Relations between India and the USSR reached their peak with the signing of the Indo-Soviet Friendship Treaty in 1971.

Alliluyeva visited India several times after she became a naturalised US citizen and she also set up a foundation in the country in the name of Brajesh Singh. She briefly moved back to the USSR in the mid-1980s and then lived in England, before moving back permanently to the United States. No words can sum up the legacy she had to endure than what she told The Wisconsin State Journal, “Wherever I go, here, or Switzerland, or India, or wherever. Australia. Some island. I always will be a political prisoner of my father's name.”

Ajay Kamalakaran is a journalist, travel-writer and iconoclast, based in Mumbai, India. He was the editor of the Sakhalin Times in Yuzhno-Sakhalinsk, Russia from 2003 to 2007.