The Voice of Russia
Olga Denisova 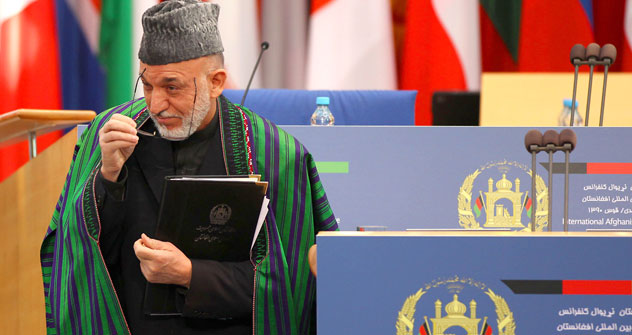 Representatives of 88 countries have gathered in Bonn for another attempt to find a solution of the Afghanistan problem. It is not only in Russia’s interests for Afghan to be politically stable and economically prosperous - but Russia is ready to support it with investments.

At present, it is still a big question whether Afghanistan’s authorities and the army will be capable of maintaining peace and order after the Western troops leave.

It is in Russia’s interests for Afghanistan to be politically stable and economically prosperous - and Russia is ready to support it with investments.

In the speeches at the conference, two annivesaries are often recollected. 10 years ago, the first similar international conference on Afghanistan took place in the same city, Bonn. And, approximately the same time, NATO’s operation in Afghanistan, named “Enduring Freedom”, began.

Anniversaries are usually a reason to sum up the outcome of the years which have passed – but, if you sum up the current outcomes of NATO’s 10-year-long Afghan operation, they will hardly seem inspiring. Hundreds of millions of dollars have been spent on this operation, thousands of people – both NATO servicemen and Afghans – gave their lives, but Afghanistan is still terrorized by militants who kill both top political figures and common civilians. Besides, Afghanistan is still the world’s largest producer and spreader of drugs. And, the worst thing is that there seems to be no light at the end of the tunnel.

Thus, representatives of 88 countries have gathered in Bonn for another attempt to find a solution of the Afghan problem. There are more than 60 foreign ministers and 17 heads of various international organizations among them.

Russia is especially interested in stopping the drug torrent from Afghanistan. Russia itself has no borders with Afghanistan, but many Russia’s partners in the Commonwealth of Independent States, the Organization of the Treaty for Collective Security (a military alliance formed by several former Soviet states) and the Shanghai Organization for Cooperation border with it. Afghan drugs come to Eastern Europe via Tajikistan, and, then, Uzbekistan, Kirgizstan, Kazakhstan and Russia.

Terrorists’ activity in Afghanistan’s northern provinces destabilizes the situation in the countries in Central Asia which are Russia’s partners in many spheres.

“It is desirable that international forces, together with those of the Afghan government, fight much more actively against terrorism in Afghanistan itself,” Russian Foreign Minister Sergey Lavrov insists.

At the Bonn conference, Mr. Lavrov heads the Russian delegation:

“The world must make sure that after Western forces leave Afghanistan, the Afghan army will be strong enough to resist all attacks which may come from terrorists,” Foreign Minister Lavrov says. “Russia insists that before leaving Afghanistan, NATO forces must report to the UN Security Council whether they have complied with the UN mandate, under which they were introduced into Afghanistan 10 years ago.”

As it has already been said, terrorism and drug trafficking are currently the two biggest problems of Afghanistan – but it looks like that for NATO, terrorism is the main one. At least, the representative of NATO’s Secretary General for the Caucasus and Central Asia James Appathurai said earlier that when Afghanistan’s authorities become capable of doing away with terrorists in their country without help from abroad, they will be able to cope with drug dealers as well.

Russia believes that the best way to stop the drug torrent is to destroy drug crops and to block the access to chemical substances which are used for producing heroin.

It is expected that the conference in Bonn will work out and adopt the policy of the West’s help to Afghanistan for the period from 2015 to 2024.

“I believe, we must recognize any political force in Afghanistan if it fulfils three conditions – lays down arms, recognizes the country’s constitution and breaks all ties with Al Qaeda and similar terrorist organizations once and for all,” Russian Foreign Minister Sergey Lavrov says:

“I think, the activity of the Shanghai Organization for Cooperation, of which Afghanistan and all the countries which border with it are members, is a good example of how countries can unite their efforts to fight against the evil of terrorism. But I also think that after stability is finally restored in Afghanistan, for this stability to be strong and lasting, Afghanistan should not be a member of any alliance anymore.”

As a country which has long been torn by a war, Afghanistan, of course, now has to restore its economy. And, there exists a project which can help Afghanistan’s economy to revive – a gas pipeline which will go from Turkmenistan to India via Afghanistan and, then, Pakistan. Russia is ready to take part in this project, Mr. Lavrov says. And, Russia is also ready to invest into the construction of an electric power line from Tajikistan to Pakistan via Afghanistan – if the organizers of this project are ready to accept Russia’s investments.