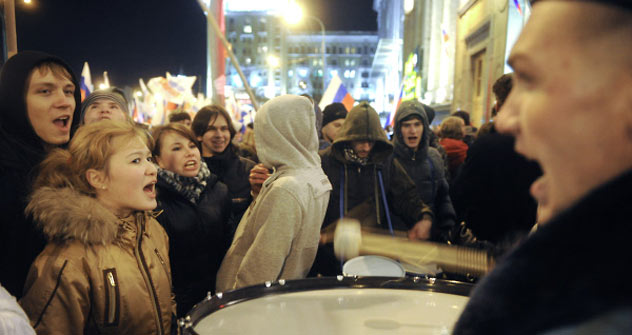 The protesters are clamouring against the 2011 elections in Triumfalnaya Square. Source: RIA Novosti

The public unrest in central Moscow has experts viewing it in different ways.

The day after the elections, supporters of the opposition clashed with police during protests in central Moscow at Triumfalnaya Square and near the Chistiye Prudy metro station. Around 300-500 people were arrested during those protests, including anti-corruption blogger Alexei Navalny.

Despite the arrests, the opposition has been somewhat emboldened by the action and announced another meeting on Saturday.

How should we regard the current events? What lessons should the authorities learn from the post-election unrest? And do the recent events really mean the officials are frightened by the situation?

When asked these questions, Russian political experts were divided in their assessments and forecasts. While some pundits believe that the recent demonstrations will not bring about serious changes in Russia’s political landscape, liberal analysts argue that the Kremlin’s actions may fuel continued public unrest.

Yevgeny Minchenko, director of the International Institute of Political Expertise, claims that the post-election scenario of public unrest was predictable. “The protests were prepared in advance, before the elections,” he said by telephone.

Minchenko repeatedly pointed out that Russian voters were aware of the violations surrounding the vote, which made the controversial results in Moscow a good cause for demonstrations. “The opposition climate in the country has played a significant role in provoking the protests,” he said. “I mean now it is not popular among Russians to support the ruling party.”

Minchenko sees the protests as alarming, but doesn’t think they will result in a state of emergency. “I can’t say that the Kremlin is afraid of the recent unrest. The authorities are just taking preventive measures to cope with the problem.”

Georgy Chizhov, the vice-president at the Center for Political Technologies echoed this view. “The wave of protests is quite logical, but it won’t be so large-scale like it was during the 2004 protests in Ukraine because the current situation is different,” he said.

Chizhov is hesitant to say whether the government is afraid of the protests or not. “On one hand, the recent demonstrations are hardly likely to undermine the current regime. On the other, the authorities are a little bit troubled by the possibility that the unrest may result in something more.”

In contrast to Chizhov and Minchenko, Yury Korgunyuk, an expert at Moscow-based Indem think tank, argued that the Kremlin is seriously alarmed by the post-elections unrest, which indicates that the falsifications during the elections “were tremendously large-scale.”

“When only around 30 percent vote United Russia, but polling stations show about 49 percent, it brings about a lot of suspicions,” Korgunyuk said. “After all, the authorities are used to manipulating, but sooner or later it will come to an end. And the tougher measures to tackle the unrest will only result in more negative consequences and lower ratings of Medvedev and Putin.”

It remains to be seen which of the experts’ forecasts will come true.

The Presidential Council for a Civil Society and Human Rights Development is dissatisfied with the work of police in the days following the Dec. 4 parliamentary vote. In a conversation with the weekly paper “Moskovskie Novosti,” council head Mikhail Fedotov gave a negative assessment of the response of law enforcement during the dispersal of demonstrations by the opposition in Moscow on Dec. 5 and 6. But unlike participants in those protests, Fedotov blamed the police and OMON (special forces) troops not for their use of too much force, but for their disorganization and lack of coordination with the courts.

“The actions of the law enforcement bodies were disorganized and not thought through. We talked about this, among other things, at Wednesday’s meeting of the public council under the aegis of Moscow’s Ministry of Internal Affairs,” said Fedotov.

As for violations of the rights of those protesters who were detained, the main violation, said Fedotov, is that they were subjected to administrative arrest without trial. Article 20.2 of the Code of Administrative Violations, which states the punishment for participation in unsanctioned actions, stipulates a fine of 500 rubles ($15) but not arrest.

“Instead of giving these citizens summonses to appear in court and releasing them, the detainees are being held in the precincts,” said Fedotov. While waiting for their fates to be decided, people have been forced to remain in police stations for 24 hours and more. “According to what law is that the punishment?” he asked.