Eurasian economic union is a barrier against China, an expert believes 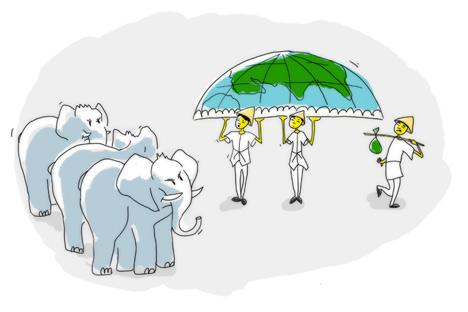 The economic integration of Russia, Belarus and Kazakhstan will have innumerable benefits for the member countries. As the Eurasian Economic Community, now in its early stages, progresses, the countries involved also hope to learn from the mistakes now plaguing the European Union. But the biggest effect of the new organization may be the formation of an economic bloc to counter the effects of China in Central Asia.

The integration of political and economic structures between states is always better than political and economic disunity. First, it eliminates customs borders and simplifies trade. Second, it increases population mobility, thereby stimulating labor migration. Third, groups of countries can react better to global challenges and thus improve the financial stability of individual countries.

Eurasian Union may be launched in 2015

The treaty between Russia, Belarus and Kazakhstan on the creation of the Eurasian Economic Commission (EEC), signed in Moscow on Nov. 18 and ratified by the State Duma on Nov. 22, does all these things. The open-ended list of EEC activity includes such macro-economic issues as customs, tariff and non-tariff regulation, establishment of trade regimes with respect to third countries, industrial and agricultural subsidies, state and municipal procurement, currency policy and labor migration. The EEC decisions will be binding; disputes will be referred to the court of the Supreme Eurasian Economic Council, which consists of the heads of state and government of the partner countries.

The EEC’s functions answer a question that has tormented Eurasian skeptics: Who benefits from the creation of a Eurasian economic space? The answer is very simple: It benefits all three countries because, for the first time in 20 years, a new economic – not political – entity has emerged in the former Soviet space, and it is an entity that preserves the national identities of all the parties.

It is anticipated that in 2011, the goods turnover between Belarus, Russia and Kazakhstan will reach roughly $110 billion – 40 percent more than last year. While Kazakhstan and Belarus will benefit from favorable gas tariffs, the Russian market will be filled with cheaper goods from Belarus and Kazakhstan.

The three countries have decided not to have a common currency, as this would mean the loss of some national independence. What is far more important than a common currency is the creation of common standards for the provision of goods and services. This harmonized outlook on the world enables all the member countries to move in the same direction and induces other countries to comply with their standards. The process of harmonizing technical regulation parameters takes time, however, and it would be wonderful if the Eurasian Union were able to hammer them out in five to 10 years.

For a fully functioning EEC, as many as 175 national norms of the member states need to be harmonized. That is a lot and, considering the red tape within the national executive authorities, the EEC is unlikely to be up and running by January 2012. A more realistic date would be 2015.

Russian entrepreneurs also stand to gain from the formation of the EEC because it allows them to register their enterprises in Kazakhstan, for example, where the taxes are lower, as is the level of corruption. Already the first several hundred enterprises have re-registered in Kazakhstan. Over time, the EEC will enable Russian businesses to hire more and better workers as the visa regime is abolished.

Apart from everything else, the creation of the Eurasian Union provides an economic shield against Chinese expansion. At present, as many as 50 percent of Kazakhstan’s companies cooperate to varying degrees with Chinese partners. China has penetrated deeply into the Russian economy and the total number of Chinese immigrants in Russia – both legal and illegal – is variously put at several million.

The creation of the EEC will contribute to Russia’s modernization and industrialization, cut transaction costs and promote international division of labor.

Dr. Nikita Krichevsky is a chairman of "Opora" , Russian Organization for Small and Medium Entrepreneurship, one of the most major unions of the entrepreneurship in Russia.