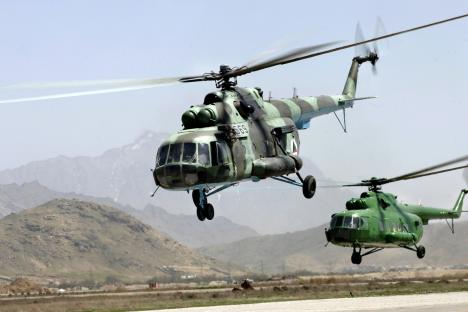 Russia is a reliable partner with Argentina in military trade. Source: U.S. Department of Defence

The delivery of two Russian MI-171E helicopters to Argentina's Air Force highlights a notable increase in the supply of Russian military equipment to South American countries.

The transfer of two Russian MI-171E helicopters to the Argentine Air Force took place on Dec. 2 at the 7th Air Force Brigade base outside of Buenos Aires. This marks the first time that Argentina has bought Russian military products. The contract between the Argentine Defence Ministry and Rosoboronexport, signed in late August 2010, also provides training for Argentinian pilots and technical specialists to operate and maintain the helicopters. Argentina will mainly use the aircraft to support the Argentine Antarctic Company in addition to performing standard search and rescue missions.

“We are very pleased with the purchase of helicopters from Russia. There is no doubt that they will help successfully support our bases in the Antarctic; delivering food, fuel and other cargoes needed for the activities of the polar explorers,” said Constantino. Argentina also intends to use the helicopters for rescue work inside of the country and within its territorial waters. “Our Russian friends have assured us that the machines will deliver a top-class performance and I believe them,” Constantino added.

For his part, Rostekhnology representative Sergei Goreslavsky said that the contract would open up new opportunities for increased cooperation in military technology between Russia and Argentina. “The helicopters brought here are the most widespread in the world; there are about 400 of them in Latin America alone, used for both military and civilian purposes. They are in service in Mexico, Venezuela, Columbia, Ecuador and Peru. Now Argentina has joined that group of countries,” Goreslavsky said.

Russian-made helicopters account for about 20 percent of all military helicopters in Latin America and comprise 2 percent of the civilian helicopter market. A service and maintenance center has been built in Mexico and another is under construction in Venezuela.

This purchase of new helicopters is a milestone of sorts for Argentina, according to Ambassador Coronelli. “The Argentine Air Force has not bought any new equipment for several decades. Now that pause has come to an end and I am sure our helicopters will acquit themselves in the best possible way,” the ambassador said.

A group of 18 Russian experts arrived in Argentina alongside the helicopters. Most of them will return home after final inspections of the helicopters have finished, but several will stay in Buenos Aires to create a maintenance infrastructure. Vyacheslav Dogdonov, chief of the warranty team of Ulan Ude Aviation Plant, explained that the helicopters have been fitted with additional fuel tanks to hold 6.2 tons of fuel to enable the helicopters to cover long distances. This modification will also allow the helicopters to hold rescue hoists and an emergency splashdown system. The machines are painted orange and white, which are the standard colors for aircraft in the Antarctic.

The MI-171E is a Russian civilian transport helicopter developed by the MIL Design Bureau and is a massive advancement over the MI-8 helicopter. It carries up to 36 passengers, has a standard range of 380 miles (those that were sent to Argentina have double that range) and a speed of 155 km an hour.

The Ulan-Ude Aviation Plant, part of the Vertolety Rossii Holding, is the only Russian enterprise that builds both airplanes and helicopters. The plant has produced more than 8,000 aircraft during its 70 year history.

Russia is one of the world’s leading suppliers of military and versatile equipment to Latin American countries, the result of a growing desire between the two regions to strengthen trade relations in the military-technical sphere.