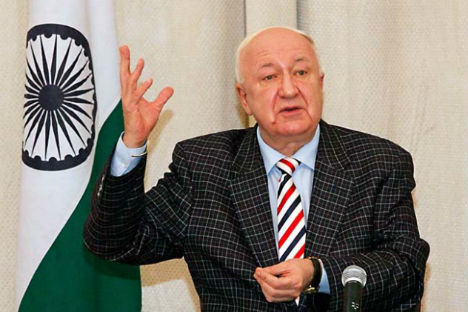 On December 7 Ambassador of Russia to India held a press conference for the leading Indian media and described the current state and prospects of bilateral relations.

Ahead of a three-day Indian Prime Minister Manmohan Singh'svisit to Moscow from Dec 15-17, Russian Ambassador Alexander M. Kadakin Wednesday said that the focus of the summit beween the leaders of the two countries this time will be on expanding nuclear energy cooperation and building on long-standing military ties, IANS reports

Kadakin told reporters here that India and Russia will be looking foward to signing of about half-a-dozen agreements in the nuclear energy, defence and economic cooperation during Singh's visit.

He added that after 10 years of "strategic" ties, the two countries had redefined their relations as a "special and privileged" diplomatic partnership. He said Russia will be with India "rain or shine".

Referring to the last year's visit of Russian President Dmitry Medvedev to India when "an unprecedented" 33 agreements were signed, he said during this visit, though the number of agreements will be less, the quality of the pacts would be far greater.

"Last year was an unprecedented year. During the summit meeting between Medvedev and Singh, 33 agreements were signed and three were signed behind the curtain. 2010 was unprecedented. India was only country that both Russian president and Prime Minister visited in one year. It is Himalayan relations," he said.

"This time it is business...official visit...it will be energy sctor, military field," Kadakin said when asked what are the areas in which agreements would be signed during the forthcoming visit of Singh to Moscow.

Among the agreements likely is one on Blocks III and IV at the Koodankulam nuclear plant in southern Tamil Nadu, which is already witnessing protests by local villagers over safety of the project following the Japanese Fukushima disaster earlier this year.

"Talks are in progress and at a very active stage about Units III and IV (of Koondankulam) Let us expect they complete it," Kadakin said when asked about the proposal.

Kadakin said Russia has proposed to expand the existing Kudankulam plant and have blocks III and IV in the near future, and to go even further for V and VI, and even in some distant future VII and VIII too if space was available.

Kadakin declined to give any specfic time-frame for the delivery of the nuclear attack submarine. Russian Navy chief Admiral Vladimir Vysotsky recently said the Indian crew is "now absolutely prepared" for operating the submarine which will be on a 10-year lease. The lease contract is estimated at some 900 million USD, PTI reports.

On the talks of Haripur in West Bengal being another nuclear plant to use Russian reactors, Kadakin said it was not a concrete proposal and just a name that came up for discussion.

Considering that Haripur was geologically much worse than Kudankulam and the ground situation due to fishermen's movement and state government's stand, India had agreed to suggest and new site for the nuclear plant and names of Orissa and Andhra Pradesh had come up for discussion.

He said Russia was ready to build the nuclear plant at any site that India chooses, but over the last one year, no new site had been proposed.

"We are ready to build. Where it will be convenient, it is India's choise not Russian choice," he said.

On the liability laws that India has introduced for nuclear plants, Kadakin said it would not be applicable to Kudankulam, as the agreement had been signed much before these rules came into being. He said Russia expected that the agreement that governed Kudankulam's units I and II would also govern units III and IV and that that is how Moscow would want it to be.

On the Nuclear Suppliers Group's 2008 waiver to India and its recent decision on curtailing transfer of enrichment and reprocessing technologies, Kadakin said Russia would follow all bilateral agreements in the field of nuclear energy with India and at the same time comply with international non-proliferation rules.

"We expect that our nuclear cooperation, in spite of all odds and all your internal problems, will continue and we are ready to assist India in this. We have the roadmap that Russian Prime Minister Vladimir Putin signed last March, under which 14 to 16 power blocks with 1 gigabytes are planned. We are implementing this roadmap. Nuclear energy and cooperation in energy sector will be the major guideline of the forthcoming visit," he added.

In the sphere of defence, the two sides are expected to sign further agreements on joint development of the fifth generation fighter aircraft and multirole transport aircraft, apart from discussing the progress of the BrahMos missile programme.

"We have signed the most important agreements before and we cannot judge the visit by number of agreements. Let's judge it by the quality and then only we can call it a success," he said, and noted that during last year's visit of French President Nicolas Sarkozy and American President Barack Obama only about three or four agreements were signed.

Kadakin said it was "understandable and easily explainable" why India-Russia summit meetings attract so much of attention globally.

"Our countries have been for over a decade strategic partners," Kadakin said, noting that the phrase "strategic partnership" had been diluted and reduced in value in recent times and had become a fashionable usage in diplomatic relations.

"I want to stress that strategic partnership was introduced in diplomacy for the first time ever by India and Russia when they signed a partnership in October 2000. We are the path-breakers and pioneers," he said.