The global battle for digital leadership 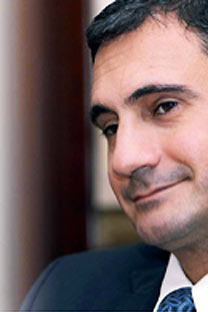 Former Mail.ru Group Executive Vice President Global Operations François Esculier has gained a seat on the Board of Directors of luxury private shopping club CollectionPrivee.ru. He recently shared with East-West Digital News his vision of the global integration of the Russian Internet, speaking his mind on the management issues domestic players faced as well as about online strategies for international brands in Russia.

How did a Frenchman become VP of a leading Russian Internet group?

I have worked in Russia for some time. Before moving to the Internet industry, I managed luxury and FMCG companies like Richmont Luxury Group and chocolate maker A. Korkunov. I met Yuri Milner, the co-founder of DST which later spawned Mail.ru Group, through an investment banker who involved in Korkunov’s deal with Wrigley in 2007.

At that time, Yuri’s team consisted mainly of geeks lacking corporate management skills. He asked if I was interested in getting involved in developing the organization and I became Executive VP working with Dmitry Grishin, the group’s CEO. I was mainly in charge of the financial and commercial aspects, including monetization.

A top Russian Internet holding Mail.ru Group owns controlling stakes in two of the three largest Russian language social networks – MoiMir and Odnoklassniki.ru – in addition to its 40% stake in Vkontakte. The group also operates Mail.Ru, Russia’s leading Internet portal and e-mail service, as well as Mail.Ru Agent and ICQ, the two largest IM networks in Russia, the latter acquired from AOL in 2010. The holding also owns a range of online games and e-commerce sites and has a 21.35% stake in payment terminal operator Qiwi. In 2010, Mail.ru Group’s gross revenues amounted to $324 million.

After spinning off from investment fund DST, Mail.ru Group successfully began trading on the London Stock Exchange in October 2010. It kept a fraction of DST’s stakes in international sites, including a 2.4% stake in Facebook.

Switching from chocolate to online advertising?

Rapid growth creates organizational challenges that are largely similar in both FMCG and Internet industries. Many Internet companies in Russia have a top down organizational structure. They should consider matrix management with project oriented cross functional work groups instead and integrate control procedures rather than hierarchical chain of approval.

In traditional top down hierarchies, managers at each level tend to manage their boss rather than their clients. These vertical structures usually stand in opposition to customer oriented organizational structures we are accustomed to seeing in FMCG companies.

Not only that. Maxtrix management structures offer better conditions for creativity, which is key in the Internet industry.

Do you think the Russian Internet industry lacks creativity?

Most Russian projects have been developed as copy cats of successful foreign models, for example Vkontakte.ru, Russia’s leading social network launched in 2006, which is basically a Facebook clone.There have been very few original product offerings on the Russian market, despite the advanced level and potential of Russian engineers.

Mediocre creativity also reflects a lack of cultural diversity. In Silicon Valley, 70% or 80% of the great success stories come from people raised in a multicultural environment, like Steve Jobs who had a Syrian father or Sergey Brin who came from a Russian family.

Foreign talent is far and few between in Russian middle management. In top management, we can see some foreigners who have created strong Internet companies, like Kupivip.ru founder Oskar Hartmann and Fast Lane Ventures founder Pascal Clément, not to mention a growing number of Russians with solid international experience.

How do you see the Russian Internet positioned in terms of its integration with the global digital economy?

The Russian market has a number of specific characteristics, the weak presence of global players not the least. Russia and China are the only large countries where Facebook and Google are not leaders. Twitter and Foursquare launched their Russian versions just months ago. Amazon doesn’t even have one, although it does brisk sales to Russian customers.

At the same time, there is a pitched global battle going on for digital leadership – it’s an open question whether social networks, search engines or mail platforms will dominate tomorrow’s web. This battle is raging in Russia as well along the same fronts, but between local titans Yandex, Vkontakte and Mail.ru. In Russia, as elsewhere, it's almost certain that pure email players will disappear in the next 5 to 10 years as more and more messaging is being done on social networks, for instance. This is why integrating Vkontakte within Mail.ru Group is so strategic. They’re already a minority shareholder, but the group has repeatedly expressed its interest in taking full control of Vkontakte and it’s not hard to see why.

In this context, some Russian players are visionaries. Not only have DST and Mail.ru Group assembled social networks, mail services and a variety of other key assets in their international portfolio. Yuri Milner is one of the rare figures who really understands the Internet as a global village. DST has prepared itself to fully leverage technological and human exchanges on a global scale, maximizing creativity and cultural diversity. If the group manages to address this vision at management level, this strength will soon become obvious with more and more group executives moving between Russia, the US, China, where DST is developing fast.

We can observe, by contrast, how many key Western players remain fixated with Western markets, coming to Russia and China late in the game anemic with copy paste schemes.

Can you tell us how luxury brands are faring on the Russian Internet and the story behind your new position on the Board of Advisors at CollectionPrivee.ru?

In Russia as elsewhere, luxury brands need the Internet to increase their sales volumes. In some cases, online channels work very well, as witnessed by the success of VentesPrivees.com in France or, more recently, the acquisition of Netaporter by Richemont. In other cases, the marriage of luxury brands and the Internet doesn’t work, or at least not yet. Luxury goods are about more than just the purchase experience, but about the luxury experience. In brick and mortar, you don’t open a luxury boutique just next to a hard discounter. On the Internet, you don’t mix your brand with brands in a lower segment, you have to guarantee timely delivery, luxury packaging, and so on. It’s often harder to create a distinctive luxury experience online because of the leveling effect Internet marketing has.

Another challenge is piracy, which is the rule rather than the exception with many Russian sites offering luxury goods. This issue could be addressed more efficiently with Russia’s participation in WTO.

Having said all this, a number of luxury brands are now going online successfully in Russia. CollectionPrivee appealed to me as the best platform to address the needs of luxury brands on the Russian Internet because its approach offers a subtle balance between quantity and quality, brand image and sales volumes. As a consequence of operating in these parameters, the site has built very strong relationships with brands and enjoys long term client loyalty and trust.

A Frenchman living in Russia since 1993, François Esculier has worked at numerous international companies. After 3 years as financial controller at RJ Reynolds, he became CFO for Russia, CIS and Baltic States at Reckitt Benckiser, then COO for Russia at Richemont. From 2006 to 2009, he ran A. Korkunov, a leading Russian chocolate maker. He then met Yuri Milner of DST, who offered him a post at Mail.ru as Executive Vice President. He currently engages in independent consulting activity. He was recently appointed a seat on the Board of Directors at CollectionPrivee.ru, a leading private sales club on the luxury and premium segment.