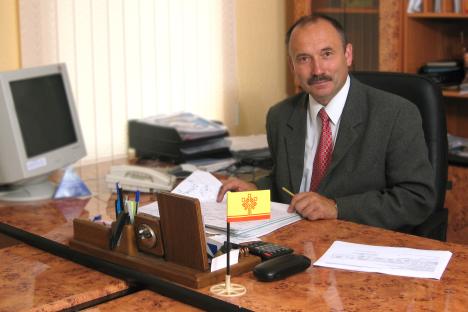 As a rule, new technologies either come to Russia from the West, or are created on the foundations of old, Soviet-era science and research institutes. But Galen, an innovative family-owned company in Cheboksary, has achieved commercial success by exporting its technology to the West. The owners of Galen — creator and inventor-in-chief Valery Nikolaev and his older son Yevgeny, the commercial director — recently spoke to “Ogonyok” magazine about how their unique enterprise came into being and the prospects for using composite building materials in Russia.

Yevgeny Nikolaev: On the advice of some builders we knew, we decided to begin developing and producing composite fixtures for civil and industrial construction. At the time, our construction industry was instituting new requirements for energy efficiency, according to which all concrete walls had to consist of three layers — an outer wall, an inner wall and in between the two a layer of thermal insulation. New approaches to joining the layers of this “sandwich” were needed, and my father suggested using composite materials instead of the standard steel fittings. He ended by developing an entire production cycle. First, we twist synthetic materials into rope and then introduce into those structures nano-particles of clay in a special heat chamber. The result is a light and very sturdy rod that can be cut up into the necessary components. It all sounds very simple, but no one else in the world had managed to come up with this technology.

Valery Nikolaev: Do you know what “little heat bridges” are? If you conduct a thermal-vision survey of the façade of any concrete-slab building you will see scattered here and there against the background of the cold violet walls hot orange points — these are the places where the steel fittings are located and through which the heat escapes from our apartments. Using composite fittings allows you to get rid of those “little heat bridges” and cut heat loss by 30-40 percent. Today few people remember that in the 1960s, the Soviet Union adopted a government program to decrease metal dependence. This led to the first experiments in producing and using composites made from polymers combined with basalt rock. This program was also of significance in space — after the launch of the Soviet lunar modules, our scientists developed construction projects for a Soviet base on the Moon. Guess what construction material they used?

Yevgeny Nikolaev:  More than 30 percent of what we produce is exported abroad — to the UK, to the Middle East and to North Africa. Our building materials are especially popular in Britain, where a program to build energy-efficient housing is in place. In addition, our nano-structured materials have been used to build a section of the transnational Europe-Western China highway in Tatarstan, a bridge in the UK, and mines in the Kuzbass coal basin. We worked around the clock for three years straight to become a Rosnano rated organization — that is a highly respected title that gives us a green light to cooperate with all Russian state corporations. This is very important, because the future belongs to composites. Russia produces 400 grams of composites per person a year. China produces around a kilogram, and the United States over 8 kilos. Steel and aluminum are materials that belong to the last century, even today’s airplanes are made almost entirely (90 percent) of composite materials.

Valery Nikolaev:  We are developing production not only in Russia, but in other countries, for example, India. We try to maintain a flexible approach because to produce goods in Russia is not always profitable, and in certain cases it’s downright unprofitable. Our Indian partners can – according to Indian sanitary norms – use chemicals that are strictly forbidden in Russia. Therefore it’s simpler to produce many components in India for the Indian market. To be honest, the production of basalt-plastic building structures no longer interests me very much. I’ve already thought up, created and set all that in motion. Now it’s the turn of my sons to take it further. I’m interested in new directions — for instance, the use of composites in road works, in power engineering and even in space.

The interview was abridged from its original version first publihsed in the Ogonyok magazine.