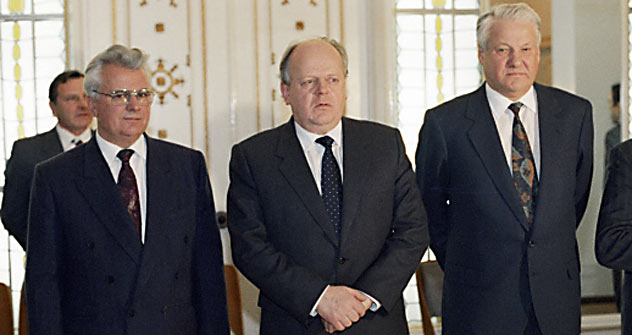 The Belovezh Accords, which officially dismantled the Soviet Union, were signed on Dec. 8, 1991.

On Dec. 8, 1991, the leaders of the biggest Soviet republics - Russia, Ukraine and Belarus – signed a document that stated in black and white that the great power was no more.

In reality, the breakup of the Soviet Union had started much earlier. In 1988, the Supreme Soviet of the Estonian Soviet Socialist Republic proclaimed the supremacy of local laws and authorities. In 1989, Lithuania, Latvia and Azerbaijan adopted similar declarations of sovereignty. In 1990, all the republics, including Russia, declared their independence in one form or another.

But the documents agreed and signed in early December in Belovezh, in what is now Belarus, were comparable in significance to the collapse of the Berlin Wall. They meant that the largest state opposing the West had ceased to exist.

Western intellectuals now blame themselves for not being able in the last 20 years to turn Russia into a modern democratic state.

“U.S. assistance failed to secure [in Russia] transparent, participatory government based on the rule of law,” wrote Ariel Cohen, Senior Research Fellow in Russian and Eurasian studies and international energy policy at the Heritage Foundation, in an op-ed in the “New York Times.”

But were there sufficient grounds for expecting such an early success and a painless and swift transition from Soviet-style socialism to a modern democracy, as interpreted by Europe and the United States?

Gennady Burbulis, as Boris Yeltsin’s deputy, was one of those who signed the agreements on termination of the Soviet Union and the creation of the Commonwealth of Independent States (CIS). Shortly before that he had been signing very different kinds of documents.

“I remember that, every evening, they brought me for signing documents authorizing removal of the last stocks of flour, diesel fuel, special types of metal… We were struggling for survival under threat of famine and an economic meltdown”, he recalls. “Not a single Soviet government body was functioning normally by that time. The country was on the threshold of a very dangerous period of lack of any power.”

This is a statement that the overwhelming majority of Russians still do not and do not want to believe. All the opinion polls on the collapse of the Soviet Union reveal roughly the same picture: Mikhail Gorbachev and foreign agitators are to blame. Popular political scientist Sergei Kurginyan believes that, for Gorbachev, the Nobel Peace Prize was more important than peace in his own country. According to Kurginyan’s view, which many Russians share, Gorbachev wanted to have more power on the world stage and sought to achieve that by paving the way for liquidation of a great power. He was helped by members of various foreign “foundations” that wanted to get rid of a strong rival in the global arena.

The main result of this transformation was the creation of a huge gap in standards of living, so huge that it was essentially incompatible with democracy. And this came after a period of relative economic equality.

The renunciation of socialism on behalf of the entire country, like the establishment of a Communist state in the first place, was a forced decision of a small group and not an expression of popular will. After the 1917 October Revolution, it took the Bolsheviks two decades to win the “final victory of socialism” – officially sealed in the Soviet Constitution of 1936. Why should the creation of something different come about any quicker?

One thing that should not have been hoped for was that the ideological vacuum created by the end of Soviet totalitarianism would be filled quickly by a democratic world view, no matter how hard it might have been pushed there.