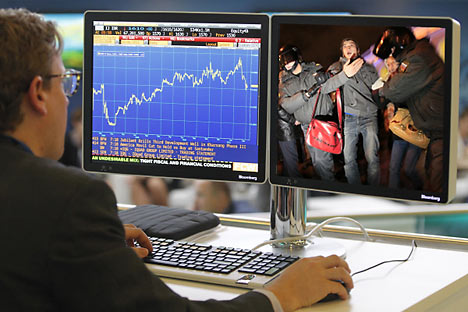 Businessmen and bankers are now concerned about the effects of continued protests on Russia’s reputation as an investment destination.

The numbers of Muscovites who have registered on Facebook to attend this weekend's demonstrations have swelled to 30,000 in the last few days. The Russian blogosphere is alive with messages and calls to friends to attend, and it is likely the numbers will continue to grow. As the calls to protest grow, Russian financial analysts have begun issuing notes analyzing how the political situation will affect Russian business, and the RTS has sold off sharply.

"We believe that the market is only now starting to price in the return of top-level political risk for the first time in 12 years, and that developments in Russia will lead to more short-term downside," said Kingsmill Bond from Citi.

He goes on to say that protests are likely to continue as "Russia is unusually well-educated and wealthy to endure a system characterized by so much corruption. Now that the spark has caught the tinder of discontent, we expect more protests," Bond wrote. Other analysts warn that if the protests this weekend turn violent, then things could get out of hand. Has Russia reached a tipping point that will either end in mass violence and repression by the state or oust Prime Minister Vladimir Putin and his clan from the Kremlin?

Renaissance's Charlie Robertson argued earlier this year that authoritarian societies with per capita income over $6,000 are increasingly prone to revolutions, and with per capita incomes of  $15,000, Russia is well beyond this point. However, Robertson made a caveat that oil producers are the exception to the rule, as their governments have  money to placate the people.

Nevertheless the dissatisfaction with Putin's regime has clearly been growing over the last year and has become increasingly more public, culminating recently with Putin being booed in public at a wrestling match – the first time he has been criticized in public since the Kursk submarine sank at the start of his first term in office.

This weekend's demonstrations could prove key. The opposition is trying to reach critical mass, so how the Kremlin deals with the crowds in front of the Bolshoi Theatre will have far reaching consequences. Until now,  average Russians have been unhappy, but not angry, so they have been unwilling to put themselves in harm's way. However, if there is violence, then the public outrage likely to follow could radicalize the people. Once that happens, as was seen in Kiev in 2006, there is no getting the genie back in the bottle.

This demonstration has also come a little early for the Kremlin. As part of the campaign to reinstall Putin as president in the March elections, the state is likely to ramp up spending to buy off dissent. Moreover, following United Russia's poor showing in the Duma elections last week, the program is likely to be even more aggressive. But this new campaign has not started and probably won't start until the middle of January, after the winter holidays. The Kremlin will need to act faster, and even then it is not certain such a plan will work unless it can effectively disuse the frustration.

Will there be violence? It would be pretty easy to organize, as if the crowd tries to move beyond the patch of street that has been sanctioned for the protest the police are almost certain to oppose them. This is what happened in the protests earlier this week. At the same time, United Russia and the Kremlin youth group Nashi have also proven themselves capable of mobilizing several thousand demonstrators when needed. But while the police can arrest several hundred protestors they can't arrest several thousand, and if the numbers that turn out really are this big then it could get ugly.