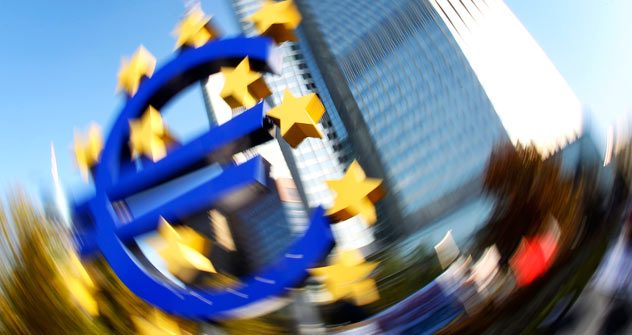 Russian and foreign businessmen are divided in their forecasts on the euro. Source: AP

The euro’s probable collapse has some businessmen scrambling to make contingency plans while others refuse to consider the possibility.

A Financial Times survey of top executives at European companies has shown that European businesses are already preparing for the collapse of the euro and thus the Eurozone. Concerns that politicians won’t be able to prevent the sovereign debt crisis from dismantling the currency have forced many businesses to establish protection strategies.

However, many Russian businessmen are hoping for the best. Alexander Arutyunov, a board member of travel firm Thomas Cook/Intourist, emphasized that contracts for the next six months have been signed in the euro and no revisions are planned.

“Even if some country leaves the Eurozone, how can we revise the price if we don’t know the exchange rate, which will only be known at the end [of the collapse of the Eurozone]?” Arutyunov said.

Other businessmen working in Russia agree. “I don’t believe in the pessimistic scenario; the euro will remain,” said Mark Kaufman, co-owner of the Polish alcohol holding CEDC, which distributes vodka brands such as Zhuravli and Marusya.

And even if the euro does collapse, Russian businesses will find a way to manage, according to Anatoly Korneyev, CEO of wine importer Simple. “If there won’t be a euro, there will be national currencies, and that won’t significantly affect the industry,” he said, adding that for the wine industry, there are minimal risks.

But Ivan Charakov of Renaissance Capital said that the unwillingness of some Russian companies to at least consider the possibility of a euro collapse and plan for its demise puts Russian holdings at a disadvantage. “Businesses need to calculate all risks, even unlikely ones, especially given Russia’s strong ties to Europe and that the EU is Russia’s largest trading partner,” Charakov said.

Export-oriented industries will be the most affected, said Chakarov, and raw materials will be affected a little later since the prices for oil, gas and metals are tied to the U.S. dollar.

“I can’t believe that someone still has confidence in the Euro,” said Oleg Deripaska recently, expressing concern about the revenue of his giant aluminum holding company RusAl, which exports primarily to Europe. Deripaska called the collapse of the euro the main problem in his business empire. In his view, the depreciation of the euro will reduce the competitiveness of Russian industry.