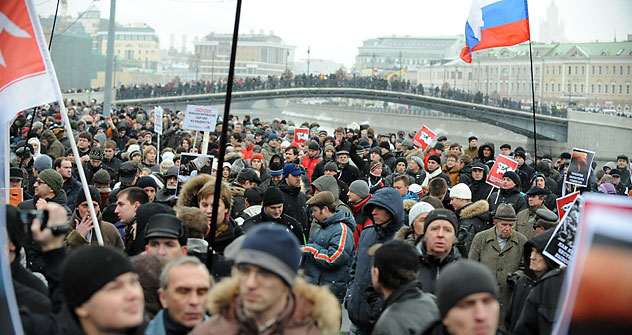 Masses gathered to oppose the results of the Dec. 4 Duma elections, but the protests remained peaceful.

The protest in central Moscow began about 1 p.m. with between 15,000 and 20,00 people gathering on Bolotnaya Square, the site of the officially sanctioned protest. It was a mixed crowd – young and old, Communists and liberals. The protestors were matched by a huge police presence.

Georgy Bovt: Voting to spite everyone

By about 4 p.m., the number of people gathered had reached approximately 25,000. Because the crowd stayed close to the 30,000 allowed by the authorities, the Kremlin did not face a decision to block additional participants from entering the square.

The organizers cooperated with the police and encouraged the protestors that gathered on Revolutionary Square opposite the Bolshoi Theater to leave and join the official protest at Bolotnaya Square across the river. The atmosphere in Bolotnaya was calm, with opposition leaders like Boris Nemtsov giving speeches calling for Putin's departure.

The protest came to a peaceful end shortly before the 6 p.m. deadline imposed by the authorities. Police lined the street two deep on the routes away from the square, while several thousand remained listening to pop music. There was something of a party atmosphere mixed in with the protestors holding up placards protesting against the results of the Duma election and calling on Prime Minister Vladimir Putin to leave office.

Media attention on the protests, which have been billed as the biggest since the fall of the Soviet Union, has been intense; the entire embankment opposite the venue of the protest was lined with TV trucks. However, the crowd was well behaved, chanting slogans such as "Russia without Putin" and "Vote again."

Estimates of the exact number in attendance vary widely ranging from the police estimates of about 25,000 while the organizers claim 40,000. Another 10,000 people gathered in St. Petersburg, the biggest of the regional protests that happened concurrently with the Moscow protest. By about 4 p.m. protestors began to drift away but at least 20,000 remained at the site until the end.

What did it mean?

The number of people that showed up were not enough to reach critical mass to spark a Arab Spring-like revolution. The overall feeling was that Muscovites wer frustrated and tired of the current leadership, rather than angry - which is a necessary emotion to spark a revolution.

The Kremlin handled the situation well. There was a massive police presence -- police formed a solid wall from the square right the way across the bridge and around the Kremlin -- but there was no provocation by the crowd and the police were impassive. By avoiding any violence, the Kremlin avoided enraging the protestors.

Yet, the protest was an enormous success in the sense that it happened at all and it was so large. It has been an enormous slap in the face for Putin and his regime. The Kremlin will need to respond. Putin's reaction so far has been to reach for the Soviet-era playbook and blame the U.S. and the CIA for sponsoring the protests - something that you usually hear from the likes of Belarussian president Alexander Lukashenko. In Russia, these claims ring hollow and will only make matters worse. The Kremlin will have to come back with some real reforms and increase freedoms if it is to placate the population. If he doesn't then this problem will only fester, until it eventually explodes over some other issue or vote.

There will be some hard thinking in the Kremlin on Sunday and the shape of the presidential campaign, which has yet to start, will be telling. Especially important will be the choice of an opposition candidate. Putin will probably still win even if a proper opponent runs, but it is important for the public that a real candidate be allowed to run. But the chances of this are slim. The likelihood is that Kremlin will increase public spending, but tighten its control over the political process.