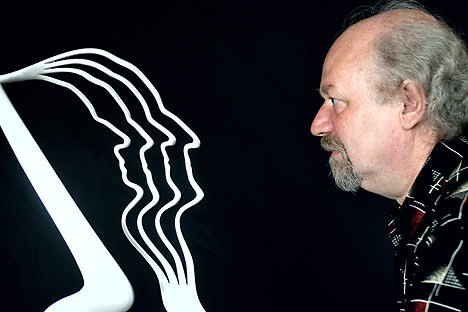 Artist Nikolai Rogatnev has unusual dreams, which he sometimes tries to replicate in his work. Recently he dreamt about Elvis Presley. The singer’s eyes, nose, mouth and hair looked like musical instruments and notes. The singer’s music played in his head, under which beautiful women were dancing and bright flowers were growing. This vision is now depicted in metal.

Rogatnev was born in 1950 in the Voronezh Region of central European Russia. In school, he took part in drawing and painting competitions, which he repeatedly won. It was clear he was going to be an artist.

Rogatnev graduated from the Buturlinovsky School of Graphic Arts and later continued his studies at Moscow’s Stroganov Institute of Industrial and Fine Arts (now known as the Stroganov Moscow State University of Arts and Industry).

When Rogatnev saw documentary film footage of Beatles’ fans trying to break through to their idols, he was awestruck. The fame of musicians, in Nikolai’s opinion, is comparable only to the glory of the first astronaut, Yury Gagarin. Rogatnev began listening to the Beatles’ music with interest, but getting Beatles’ records in the Soviet Union was quite difficult. Years later, when Moscow cinematographer Mikhail Eidinov suggested that Rogatnev make a sculptural composition devoted to the famous musicians, he agreed.

Rogatnev worked on “The Beatles” for three years. Eventually, he created a guitar with strings featuring duplicated profiles of the famous musicians. He wanted to show that music brought together the musicians, whose work brought together people.

The artist showed the piece to colleagues at the national exhibition Design Land 2006, where it received high praise from designers. This might have been the end of the story if Rogatnev had not had a prophetic vision.

“When I finished the work, I took it to an exhibition in Sochi,” Rogatnev said. “I stopped at a hotel and went to bed. I saw John Lennon sitting in the room with a big beard.” In the dream Lennon predicted that the artist would go to Liverpool and present his artwork there.

Eight months later, Rogatnev solemnly handed over the work to Jerry Goldman, managing director of The Beatles Story Museum. When the work was installed in the museum, the artist recalled the words John Lennon had spoken to him in his dream: “Nikolai, you will be in Liverpool, the city where it all began.”

When Rogatnev flew to the UK as part of a Russian delegation to move his sculpture to The Beatles Story, a museum in Liverpool, he was leafing through a magazine and read an article about Elvis Presley.  On the same trip, one of the delegation members told him: “In England, there are two other people truly loved by the British, Americans and Russians. That’s Elvis Presley and Sherlock Holmes. I hope you devote work to them.”

After he returned home, Rogatnev made sculpture entitled “Sherlock Holmes’ Pipe,” which was later presented to Queen Elizabeth II.

The sculpture depicts one of the most important moments in the life of the famous detective; Sherlock Holmes’ duel with Professor Moriarty at the edge of a waterfall. Rogatnev created his own “waterfall” by replacing the water with jets of tobacco smoke. Sherlock Holmes is at the top and his foe falls into the mouth of the pipe, as if into hell.

It took Rogatnev a year to create the sculpture. He developed the technology himself that allows the lines to achieve a special lightness and smoothness. It appears as though “Sherlock Holmes’ Pipe” is made out of glass and not metal.

Rogatnev considers himself a symbolist artist. He explains his creative vision like this: “God’s creation of man and the universe was a creative act, and we are created in His image and likeness. That means we, too, are incorporated in art. Art is creating an image. It should be able to be understood by anyone. I want to create symbols of Love, Harmony and Beauty, which everyone needs.”