Terem Quartet: Why the balalaikas? 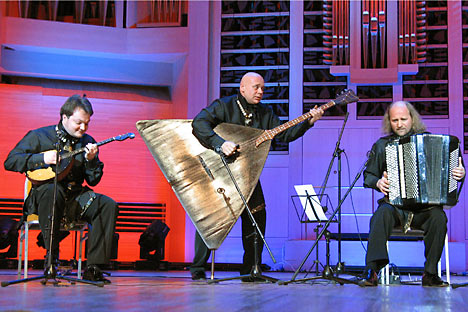 The Terem Quartet brings together musicians with a true Russian soul. Source: Kommersant

The members of the Terem Quartet can be described as cosmopolitans with a Russian soul. When they first performed at the Leningrad Music Teacher Training College in 1986, the musicians had a great success.

A concert hall packed with an audience of thousands falls silent; the stage is barely lit. First, a domra begins playing gently, echoed by a button accordion. Then a second domra and a bass balalaika chime in. The audience recognizes the theme at once – the unmistakable tune that has been a hallmark of global music culture for years – “Besame Mucho.”  The St. Petersburg ensemble Terem Quartet, known for its use of traditional Russian instruments, is performing the Mexican song at the opening of its 25th anniversary concert.

The members of the Terem Quartet could be called cosmopolitans with a Russian soul. When they stepped on to the stage of the Leningrad Music Teacher Training College for their first performance in 1986, the audience would not let them go, giving them a standing ovation. At that time, the musicians promised they would make the group their life’s work. Such promises are easily broken, but the quartet has kept its word.

The group’s members have always taken their work seriously. When considering what to call themselves, they thought for a long time before deciding that the idea of a terem expressed what they wanted to say. “Terem” is an older Russian word for palace, but it is broader than that, encompassing ideas of a place to live, a family home, and a place where all are welcome.

But although the group plays Russian folk instruments and chose an old Russian word for its name, the group members wanted to be more than a caricature of Russian culture.

“We are breaking away from the customary Russian stereotype,” said Andrei Konstantinov (soprano domra). “Unfortunately, the national image was hugely disfigured during the Soviet era. A red side-buttoned shirt, a garish national headdress and a pinafore dress are now what first pop into one’s mind as being truly Russian. A ridiculously narrow image has taken firm root in the minds of both Russians and foreigners. Yet, in fact, we are so different! Stop by any local history museum and you will be surprised at the diversity of colors, patterns and ornaments! When our children are on the stage, you will never see two costumes alike.”

The “children” are young musicians that they are training through their TeremOK project. The members of the group arrange regular competitions and master classes for the next generation of musician under the TeremOK project. “This is our contribution to the future,” said Mikhail Dzyude (contrabass balalaika). “We would like to open a regular school; master classes are no longer enough. Working with children is always a moving experience and an infinite source of surprise. It also permits you to live to the fullest.”

One concept they hope to drill into their young charges is that playing music is a way to connect with people. On stage, the musicians create a welcoming atmosphere. They say that their main objective is to make the audience feel like family.

“Outwardly, people are very different. But if you go deeper – you’ll find they are not, they are just hiding in the guise of office workers or housewives. Inside, they are all yearning for love and happiness,” said Konstantinov. We think life is unfair but there is no way it can be fair. We, as musicians, have to be the source of love and happiness. It is essential to maintain sincerity and a feel for the atmosphere. If you do, all the barriers between you collapse and the audience gives an instantaneous response and sits there fascinated.”

They also want their audience to see that music is fun. “Humor and self-irony are an attitude towards the self that is intrinsic in Russian culture. This is what helps keep one sane when living under difficult conditions. Humor is the reverse of answers to serious questions. When King Lear asked his fool why Ursa Major was made of seven stars, the answer was, ‘because they are not eight.’ A musician’s task is to lead the listener towards answers to serious questions from a perspective that they don’t view as frightening,” said Andrei Smirnov (button accordion).

The musicians have traveled extensively, appearing in more than 60 countries, performing over 3,000 concerts. They look at touring as a continuous string of new impressions from which inspiration is born. They are always perceptive of the culture of the country in which they tour and, as a rule, never leave without acquiring new songs. Yet in general the soul of the Terem Quartet belongs to Russia– and to St. Petersburg in particular.