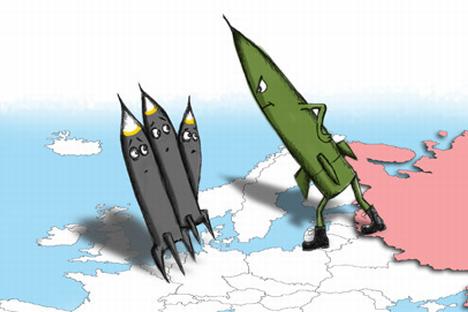 Russian Defense Minister Anatoly Serdyukov keeps his promises. He said that he would create the Aerospace Defense Forces, a new military unit, by Dec. 1. As promised, they are in place and already have a mission.

The Kaliningrad radar station intended to improve Russia’s response to incoming missile attacks from the northwest has been put on operational duty. The station covers a sector that was previously the responsibility of radar bases in Mukachevo, Baranovichi and Skrunde during the Soviet era. “It greatly expands the range of information for subsequent decision-making by the country’s top leadership,” said Lieutenant-General Oleg Ostapaenko, commander of the Aerospace Defense Forces.

The new station, like the new aerospace forces, is to form Russia’s first line of defense against the increasing threat of strategic missile attacks. Russia’s efforts are in response to the Pentagon’s plans to deploy anti-ballistic missiles in Europe that are close to the Russian border, a plan that is undermining the global collective security system.

Since the United States unilaterally withdrew from the 1972 anti-ballistic missile treaty, basic arms control agreements have been under constant bombardment. In late November, the State Department announced that the U.S. was no longer bound by its commitments to Russia under the Conventional Forces in Europe Treaty. Russia retaliated with a vengeance. In a televised address to the nation, Russian President Dmitry Medvedev declared that Russia would withdraw from the New START treaty and would renounce its disarmament plans if the United States continued to build its anti-missile defense system in Europe.

Medvedev first ordered an immediate increase in the strength of the strategic nuclear forces by creating a national Aerospace Defense System. He also announced that Russia would deploy “strike systems,” notably Iskander missiles, throughout the country’s west and south.

The strategic ballistic missiles put in service in the Strategic Missile Forces and the Navy will be fitted with advanced capabilities for penetrating missile defense systems and efficient new warheads, Medvedev said.

As a result, the already shaky bilateral arms control agreements are being laid on the altar of anti-ballistic missiles.

On Dec. 7, the 1987 Russian-American Treaty on the Elimination of Medium and Shorter Range Missiles marked its 24th anniversary. It is difficult to say what will happen to this key disarmament agreement, given President Medvedev’s latest statement and Russia’s threat to pull out of it. The consequences from such a move could be dire.

In February 2007, Yury Baluyevsky, then chief of the Russian General Staff, said that Russia might withdraw unilaterally from the 1987 treaty. The move was directly linked to the deployment of the American missile defense program in Europe. Russia, for its part, had declared several years earlier that it would give an asymmetric response to Washington’s plans by further developing its strategic offensive assets. First Deputy Prime Minister and former Defense Minister Sergei Ivanov also described the treaty as a relic.

In principle, there is nothing extraordinary about asymmetric tactics. As global anti-missile systems are developed, modernization of the existing arsenal of nuclear weapons is a natural response.

Shorter and medium-range ballistic missiles – those with a range of up to 3,100 miles – have always been regarded as strategic nuclear weapons. It is such missiles – the American Pershing-2s in Western Europe and the Soviet SS-20 Pioneer missiles stationed in Eastern Europe and the Far East that provided the “critical mass” effect that, in the mid-1980s, almost triggered a real nuclear conflict between the two powers.

Does Russia stand to gain if it resumes production of this type of missile and thus launching them becomes a possibility? It is difficult to believe, in spite of numerous declarations, notably those by the director of the Moscow Thermal Technology Institute, Yury Salomonov, that Russian industry has everything it needs to build such missiles. There are considerable resources required in order to restore the entire production chain. Besides, it hardly makes sense to build something that is 40 years old, especially when considering that most of the missile’s production took place in Ukraine.

The military facet to the problem is of course paramount. In the years from 1985 to 2011, Russia lost a significant share of its operational military space, while the Americans since then have acquired more. Russia will have to look for deployment sites in the country’s relatively small European region.

In contrast, the U.S. Air Force has no need to resume production of Pershing-2 missiles. It would suffice to open cheap land bases equipped with standard Tomahawk cruise missiles, which are allowed, and fit them with nuclear warheads. Considering that the U.S. maintains the capacity to build 500 of these missiles a year, the potential threat from Tomahawks alone is easy to imagine.

As a plan B, Russia may deploy the conventional warheads of its Pioneers, or a truncated version of the Topol-M2 mobile inter-continental ballistic missile.

The concept of missile defense calls for balance; the distribution of weaponry should be appropriate and preferably not asymmetric. The situation could change significantly if Russia countered the American missile defense system with its own adequate defensive response – which, according to the Russian military and political leadership, is the essence behind the newly created Aerospace Defense Forces.