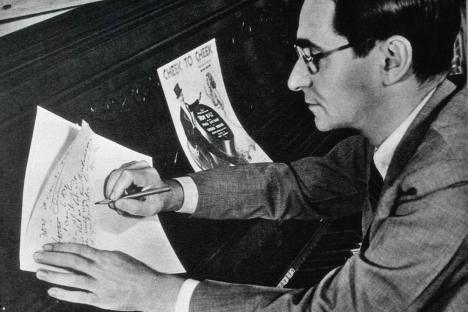 Irving Berlin, the embodiment of American culture, was actually born in a far-flung corner of Siberia.

A hundred years ago, cafés in New York were very different than they are today. There weren’t any plasma TV screens showing Fashion TV or massive speakers throbbing with Indie-pop and progressive house music. The main attraction in these cafés was live music – songs sung to piano accompaniment by whoever was working there. These cafés were everywhere in Chinatown and their proprietors were always trying to outdo one another in their attempts to attract customers. Mike Salter, owner of a cafe called The Pelham, was desperately looking for a new performer – all too often his customers decided to spend their evenings in the café next door, listening to songs that could only be heard in that one place.

The Pelham needed its own song, and the café’s resident pianist, Nick Nicholson, added songwriting to his list of duties. But he found it difficult to come up with the words for his melodies, so Salter decided to assign this task to one of his newly recruited singing waiters: a young man who spoke good English. The result of this collaboration, “Marie from Sunny Italy,” did more than just attract the punters. The song was so successful that it was soon published. The publishers gave the writer of the song his first royalties, and also a new name – a name that was to become a legend. And it was definitely not Italian – It was Irving Berlin.

Jerome Kern, the famous Broadway composer, once said of Berlin: “He doesn’t have a place in American music. He is American music.” And yet, this icon was born Israel Baline in the Siberian city of Tyumen.

Berlin was just 14 years old when he got a job at the Pelham, but already had two years of education and six years of working life under his belt. He began working as a paperboy at the age of eight, following the death of his father.

The family left Russia in 1893, spurred on by the anti-semitism rampant in Russia at the end of the 19th century. The Baline family had moved from Tyumen to Tolochin, in what is now Belarus, but immigrated to the United States following a pogrom there.

Before Berlin was employed in the Pelham, the extent of his musical education consisted of a few trips to the synagogue with his father, who made a bit of extra money as a cantor. After receiving his first royalty payment – all of 37 cents – Berlin started to write the lyrics for other songs, and involved various composers in order to set the words to music. However, he was never quite satisfied with the results from these collaborations, and so he decided to start composing music himself.

Berlin was not able to write the music for his melodies by himself, though, so he dictated the tunes of his first songs to the composer Arthur Johnson. However, his assistant Helmy Kresa, who worked with Berlin throughout his creative career, transcribed his most popular songs. Berlin only learned how to play the piano unassisted at the age of 45.

It was with Kresa’s help that Berlin wrote his first hit – “Alexander’s Ragtime Band” – in 1911. This song was sung by all of the American jazz legends: Al Jolson, Louis Armstrong, Bing Crosby, Ella Fitzgerald, Billy Murray and Liza Minelli.

Three years later, in 1914, Berlin finished his first musical, “Watch Your Step,” about the same time he was conscripted into the U.S. Army. In 1918, during World War I, Berlin’s commanding officer asked him to do some fundraising in order to build a shelter for soldiers’ relatives. Berlin decided to do what he did best and put together a musical called “Yip Yip, Yaphank!” It included the famous songs “Oh! How I Hate to Get Up in the Morning,” as well as “God Bless America.” The musical grossed five times more than anticipated.

Irving Berlin’s commercial good fortune continued during his civilian life. After he left the army, he started a company to publish his own works, opened the Music Box Theater on Broadway and founded ASCAP, one of the biggest American performing rights organizations.

Even in his darkest moments, Berlin found a way to make music out of tragedy.

The composer’s newborn son lived for only 25 days and died on Christmas Eve, 1928. As the wounds were slowly healing, Irving Berlin went into his office and said to his musical assistant, “Grab your pen and take down this song. I just wrote the best song I've ever written!” Helmy Kresa transcribed “White Christmas.” The song became the most popular American Christmas song ever written.

The next fall, he lost all his savings in the stock market crash of 1929 and could only joke, “thank goodness I have a rich wife.” Berlin’s second wife, the society belle Ellin Mackay, was the granddaughter of a millionaire. They first met at the Ritz, which provided the inspiration for the song “Puttin’ on the Ritz,” a tune that has become the unofficial anthem of Hollywood.

In 1935, Fred Astaire was looking for a composer for a romantic comedy called “Cylinder.” Berlin was exactly the man for the job. The composer locked himself in a hotel room with Astaire’s personal pianist and created one of the most popular melodies in Hollywood; “Heaven, I'm in heaven, and my heart beats so that I can hardly speak...” Berlin added the title “Cheek to Cheek” after he saw Fred Astaire dancing on the set of the film, cheek to cheek with Ginger Rogers.

But by 1942 New Yorkers had just two things on their lips – “This is the Army, Mr. Jones” and “God Bless America” – the original wartime hit ditties from the musical “This is the Army.” Following a successful premiere on Broadway, Berlin took the musical around the country and set up a charity for helping wounded soldiers, war widows and their families, which received $2 million.

The next year, Berlin decided to make a film based on “This is the Army.” For the main role, Berlin wanted to find a man who looked like a classic American hero. That actor was Ronald Reagan.

By the end of the 1950s, Irving Berlin had created a number of successful Broadway musicals.

The end of an era

But Berlin was losing his connection with the public. In 1957, Berlin turned on the radio and heard Elvis Presley singing a rock and roll adaptation of “White Christmas.” He was so offended that he banned all radio stations in the United States from playing the song. His final musical production, “Mr. President,” was beyond the saving power of President John F. Kennedy. Following the premiere of the show, Kennedy congratulated Berlin on his latest Broadway hit, but hit it was not: The musical failed to make money and critics declared that Berlin was getting old and should quit while he was still ahead.

Berlin distanced himself from the music scene, but on Christmas morning 1983, the 95-year-old composer was forced out of his seclusion after a small crowd assembled under his window and sang “White Christmas.” Still in pajamas yet deeply touched, Berlin invited the unexpected guests into his kitchen and gave them all cups of cocoa.

Three years later, Steven Spielberg released an animated feature film titled “An American Tail,” which was based largely on Irving Berlin’s biography – a story that epitomizes the American dream.