Pinning Hopes on the Pepsi generation 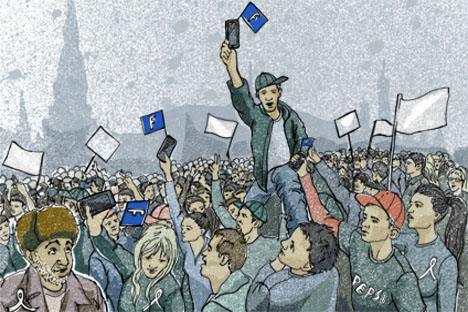 Even if nothing comes of the most recent protests, the politicization of young people will have consequences for Russia’s future.

The elections are over and post-election passions will soon subside, too. With all due respect for the activists who took part in protests on Triumfalnaya Square, such outbursts of activity are very sporadic. In another week, the country will forget about politics and start preparing for the New Year. This is the right time to sit back and think about what might happen next.

Most likely the protest electorate will relapse into hibernation – one part of it is quite happy with the mere fact that protest has been voiced while the other part will soon realize that there is nothing to fight about. Just Russia and the Liberal-Democratic Party of Russia will promptly form a coalition with United Russia or, to put it simply, will get a few prestigious posts in parliament and calm down. The Communists will assume their habitual pose of “always the bridesmaid, never the bride.” In other words, if you look at the Duma, nothing has changed in any important way, as the protest voters will soon learn.

The situation might have been different had Yabloko performed better in the voting. Although it would have made no difference to the power structure, the democratic intelligentsia might have regained some of its confidence and become more active after 10 years of silence. That could change the alignment of forces in society and potentially be a deterrent of sorts for the authorities. Yabloko accomplished that task up to a point: it failed to get into parliament, but it did influence the party spectrum, which now looks not like a monopoly of four parties, but rather like “4+1.”

As regards the upcoming presidential elections, everything is crystal clear. Yes, they are likely to cause more debate than in 2004 and 2008, but everybody understands that so far there is no challenger to Putin. His problem will be not to allow his image to be further tarnished while winning. There are signs that the Kremlin spin doctors are somewhat at a loss. They have not yet decided how to best use United Russia and are wondering whether it would be wiser to bring return the “against all candidates” line to the ballots.

However, the opposition faces bigger challenges than Putin. In today’s Russia, which has seen more than its share of revolutions, it is impossible to win without a positive goal, an alternative the people can understand. The opposition has none; it has only protest sentiments. The authorities can even afford to allow these sentiments to grow to the brink of destabilization looms, at which point the protesters will instantly lose the support of the majority.

It is not only about the politicians, though. The recent elections have proven that Russia has three parts, whose populations have very different mentalities. The first is the two capitals, where protest sentiments are high and where Western-style democracy is still popular. The second is the vast regional areas swept by protest sentiments, but without the democratic tinge. The third zone is the areas subject to an absolute form of rule, where the will of the local strongman is the only law.

Can any serious reforms be carried out in a country made up of such parts? The question has already been asked during the era of Gorbachev’s reforms, and the answer proved to be negative. Since then, we have had totally different political systems in the former Soviet republics. Does it mean that an attempt to carry out real rather than token reforms throughout the Russian Federation is fraught with the risk of another territorial split? There is no answer to that question.

Nevertheless, two positive trends have emerged in the aftermath of the elections. The first is the politicization of the young. For a long time, the “Pepsi generation” was not interested in anything but itself, but the authorities have awakened it with their crude administrative pressure. Young people used social networking to protest by staging a veritable hunt for fraud, and now they’re expressing outrage over vote rigging. Of course many of these young people will soon calm down and slip back into their usual state, but others have acquired a real taste for political struggle and are drawn towards opposition parties. That is particularly important for the democratic camp, because it has long been in need of an injection of young blood.

The second trend is the same as the one we saw in the Arab countries this year: society organizing itself through social networking. The “virtual community” is already strong enough to exert an influence on the rest of the public and has even begun to smooth out the differences between regions. That process seems set to accelerate. The question is whether this community can only protest or whether it can throw its weight behind somebody. And if so, behind whom?

The two forces that dominate “virtual Russia” are the nationalists, who are united by their dislike of immigrants, and the resurgent democratic movement. When the two trends come out of the virtual world into the real, they will probably oppose both each other and the president. The consequences are hard to predict, but it looks as if we have no one to count on except the “Pepsi generation.”