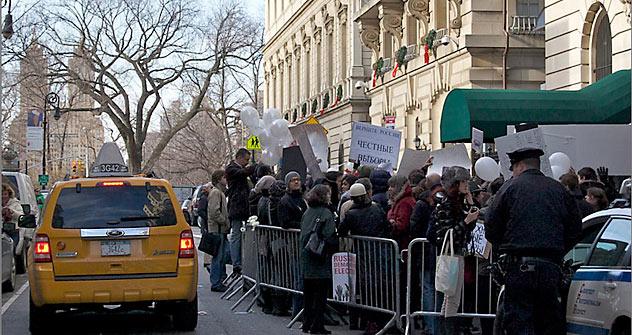 Protests against the 2011 elections in New York. Source: Olga Rychkova via Lenta.ru

The turnout at the New York protest against the Dec. 4 election was unprecedented for Russians in the U.S.

On Saturday, Dec. 10, thousands of Russians all over the globe took to the streets to express their dissatisfaction with the results of Russia’s Dec. 4 State Duma elections. The Russian consulate in New York was no exception. At least 500 people turned out during the afternoon rally, with more than 300 at the demonstration’s peak.

The New York protest of Russians living abroad was second in size only to the one held in Berlin, which boasted 800-1,000, but organizers were pleased with the turnout – unprecedented for Russians in the U.S.

“I’m surprised to see hundreds of people here today,” said Natalia Pelevine from the Committee for Democratic Russia, one of the co-organizers. “Many of these people are not politically involved and came because they are outraged by recent election falsifications. They are just fed up with the deeds of Russian government.”

Among attendees were writers, journalists, artists, actors, families with toddlers, senior citizens, big manly looking Russian man, a few models, students and even a cute boxer named Cody.  Like the gathering on Bolotnaya Square in Moscow, the atmosphere in New York was friendly and festive. Many people wore white ribbons and carried white balloons or white flowers. Some were in Santa hats (a nod to SantaCon, which was simultaneously going on downtown).

“Some people give me a hard time because I moved to the U.S. They feel I betrayed my country,” said Polina Volkova, one of the protesters. “My friend was illegally detained this week during the protests in Moscow, the judge didn’t even bother to look at the video from the event and sentenced him to 15 days in jail. I want people to know that things like this happen in Russia. I’m glad that people stood up and said ‘enough.’”

The group of Facebook activists who put the meeting together said they are amazed that all protesters were expressing the same concerns answering why the came to the Consulate. “I interviewed people for our video stream during the rally, and every single person literally told me the same: We are worried about families and friends who are in Russia; we do care very much what’s going on there and we would like to apply our knowledge and experience in our own country, but it has to change first,” said Natalia Taylor.

Russia’s consul in New York, Andrei Yushmanov, was officially invited to join the demonstrators, briefly showed but did not give any official comments. “I think he was just passing by, trying to look as discrete as possible. I noticed him, caught up to him and asked a couple of questions,” wrote journalist Ksenia Semenova in her report from the rally at Snob.ru “He refused to give me an official comment. However, when I asked whether he supports the protesters, he said there is nothing to support and the elections were fair. He added, though, that people have freedom of declaration of their will, and that he is glad they are exercising their rights. He looked surprised with the size of the crowd.”

The Facebook group “Fair Vote for Russia – New York” counted over 700 members by early afternoon on Saturday and continues to grow. The next steps depend on how the things unfold in Russia, but if the government won’t acknowledge and organize new elections, most likely there will be another bigger protest on Dec. 24 in solidarity with protestors in Moscow, who announced plans for a second rally on that day. “I’m against revolution; we are here just trying to support the people in Moscow and other cities, showing that we are together,” said Dmitry, one of the participants in the New York protest. “I’m glad if we succeeded to do so.”