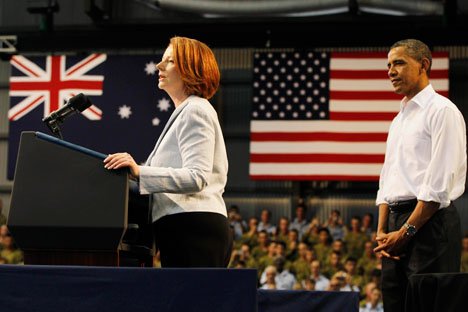 Australia’s decision to host a permanent US military presence in the northern city of Darwin is likely to spark a fierce arms race in the Asia-Pacific region.

Australia is sometimes called the Lucky Country. It is an apt nickname for a country that is far from the world’s trouble spots, has vast mineral resources and where Monday is just another excuse to hit the beach. However, the name was coined ironically in the 1960s by author David Horne who wrote, “Australia is a lucky country, run by second-rate people who share its luck.”

Horne’s homily on the collective IQ of his country doesn’t have to be taken seriously but it is very likely that Australia’s lucky streak is going to end soon. Part of the reason for such an outlook is that the Australian leadership is reacting to the rapidly transforming world order around them with hysteria rather than level headed diplomacy.

Last month Australia announced its decision to host a permanent US military presence at the Robertson Army Barracks in the northern city of Darwin. The US has had a military alliance with Australia since World War II, but the latest is a significant new projection of forces in the region. Despite a tottering economy, America has signalled it will station up to 2500 troops, in addition to bombers, fighters, tankers and spy planes, followed by navy ships and submarines to be based in Perth.

Clash of the Titans

America’s surge in the western Pacific will clash head-on with China's interests, resulting in an escalation of tensions in the Asia-Pacific region. It risks sparking an arms race, with China, Japan, Russia and Indonesia upgrading their military power to narrow the gap between them and the US.

Australians like to think of themselves as rational and practical people who have thrived in their rugged, unforgiving environment, but their strategic thinking – if one could call it that – is shockingly impractical, venturing into the realm of fantasy. The current flavour of the season is the so-called Beowulf Option. In “Learning to Walk Amongst Giants: The New Defence White Paper”, Australian Government advisor Ross Babbage has set out that Australia needs the military strength to “rip an arm off any major Asian power that sought to attack Australia”. Babbage’s reference is to a medieval British legend, in which the hero Beowulf literally tears a limb off a much larger enemy, the marauding monster Grendel.

How will the antipodean Beowulf gnaw on China’s limb? Babbage proposes Australia should be able to “do serious damage to the Chinese leadership's primary interests” and that it develop “the capability to stir serious internal disruptions and even revolts in the event that the Chinese threatened Australia's vital interests”.

Considering that China is extremely touchy about internal disruptions, that is sure to the raise the dragon’s hackles. Indeed, few Australians have paused to ponder how their country would survive a one-armed – and angry – nuclear China.

Babbage’s opus is remarkable among modern day ‘strategy’ papers for its overreach. Not only does Australia not have the money for these big ticket purchases, it also lacks the industrial base to maintain – let alone build – such high-octane hardware, not to mention that finding several hundred fighter pilots from among its laid back and limited population would be a challenge in itself. Also, if Australia (in the manner of Britain’s 1962 Polaris missiles acquisition) proposes to acquire nuclear-armed subs from the US, it will expose the hypocrisy of its nuclear non-proliferation policy.

Again, the trouble with Australia’s foreign policy is that it is hampered by immature diplomacy. Under former Prime Minister and current Foreign Minister Kevin Rudd (once a fawning Sinophile who liked to flaunt his fluency in Mandarin at APEC conferences), Australia became China’s best buddy, much to the amusement of APEC leaders who were surprised at his artless naivete.

But with China buying up their minerals faster than the Australians could dig it out of the outback, Rudd and his cabinet were getting Chinastruck. In fact, so besotted was Rudd with Beijing that in 2008 he abruptly pulled his country out of a US-Japan-India-Australia quadrilateral security partnership when the communists frowned on it.

However, Rudd received a rude jolt when it was revealed that Chinese spies had hacked his mobile phone and laptop computer during his 2008 trip to China. Australian authorities discovered Beijing had made repeated attempts to break into the internet networks of the Australian government, private businesses and foreign embassies based in Canberra. They also got wind of Chinese penetration of Australia’s mining industry as a prelude to private bidding for the country’s mining giants. Rudd’s honeymoon was quickly over.

In fact, during the general elections a year before, Rudd exhibited pettiness unbecoming of a future Prime Minister by publicly promising to “tear up the (previous) government’s offer to sell uranium to India”. The ostensible reason for Rudd’s reckless outburst, widely reported in India, was that New Delhi is not a signatory to the Nuclear Nonproliferation Treaty. However, he had no problems selling uranium to China, the world’s biggest proliferator, having helped spawn at least two rogue nuclear powers – Pakistan and North Korea.

Unperturbed, the Indians signed a Russia-brokered deal with Kazakhstan, the world’s largest produce of the ore, shutting out Australia for the next 30 years. Today New Delhi won’t accept uranium from Australia even if they offered it free.

Because of these extreme policy swings, Australia has alienated both China and India (key players in the Pacific in the near future) although current Prime Minister Julia Gillard has been trying to mend fences by offering uranium to India. Rudd remains a senior party leader and his links with fundamentalist churches and a racist worldview could be factors in deciding in what direction Australian diplomacy moves.

Australia’s other problem is its failure to come to terms with the reality of today’s changed geopolitical landscape. They have watched with dismay the world go multi-polar and the Western economies slowly crumble. Many Australians like to think of themselves as integral to the maintenance of the West’s hegemony. They have been loyal foot soldiers in a string of American wars around the world – Vietnam, Iraq and lately Afghanistan. Now, as Anglo cousin Britain declines and looks more inward, Australia is keen to take over the mantle as America’s closest ally.

To be sure, Australia has legitimate security concerns. It is a sparsely populated country with just 29 million people in a landmass that’s nearly as large as China. Most of its people are concentrated in the east coast while the sparsely populated northern coast is closer to crowded Indonesia, a continent away from heartland Sydney or Melbourne.

Then there’s saber rattling. China is building its Indian Ocean task force and India is quietly constructing a Pacific fleet. Add in the fact that Indonesia is arming heavily right next door (Jakarta will soon take possession of six high-performance Sukhoi-30 fighters from Russia), and you begin to see why the Australians are getting jittery. (It is worth mentioning that during WWII more bombs were dropped on Darwin than were used in the attack on Pearl Harbor. In fact, from 1942-43 the Japanese launched as many 100 raids on Australia.)

However, Chinese military expansion in the Pacific is a qualitatively poor counter to existing US naval assets in the region. Paul Dibb, director of Australia’s Defence Intelligence Organisation, wrote in an article in the conservative newspaper, The Australian: "The Chinese military is undermined by national defence industries that produce inferior equipment. China's armed forces are, and will long remain, no match for those of the US." Indeed, the Chinese will pose no threat to Australia well into the 2020s.

And India, which possesses the world’s second largest arable area, would hardly be said to be coveting the dusty Australian territories. The bigger picture is that as the world’s fastest growing economies, both China and India have an interest in protecting their maritime communications. And Indonesian rearmament has to be seen in the backdrop of East Timor becoming a virtual Australian colony.

China has so far made incoherent comments on the American takeover of the Darwin base. This could be because it was caught unawares by the suddenness of Obama’s move. However, the Chinese leadership is prone to its own peculiar hysteria, and a backlash might follow in the coming months.

The US-Australia move could be the game changer for Asia, as it would compel China to rethink its foreign policy principles. In a public talk in Washington last month, Qinghua University professor Yan Xuetong, considered a policy hawk, said China could strike up its own military alliances to counter the US network in the Asia-Pacific.

A major Chinese naval expansion will force the Russians and Japanese to expand their navies. Russia has the world’s largest number of idle nuclear-armed submarines and they could be re-commissioned to counter China. That would clearly undo any gains achieved by nuclear disarmament talks.

Darwin can also expect a spurt in crime. Incidents of rape and murder committed by American soldiers in Okinawa, Japan; Bishkek, Kyrgyzstan; and Subic Bay in the Philippines, give few grounds for optimism that ugly incidents can be avoided. Indeed, Darwin is a volatile community with higher levels of crime than any other Australian city. Thousands of US military personnel, immune from local laws, and seeking rest and recreation will make things worse.

Australia must accept the reality of geography and build alliances with Asia rather than declining powers. Unlike the vocal – but largely impotent – Muslim world, the Asian giants won’t be intimidated by American firepower.

Currently, Australia is the only country in the OECD that remains unscathed by the recession. This prosperity rests entirely on its exports of minerals, metals and food to Asia. If the Pacific becomes the next flashpoint, Australia’s lucky streak could end very, very quickly.