In hot seat: Russia firms up plans for 2012 APEC summit 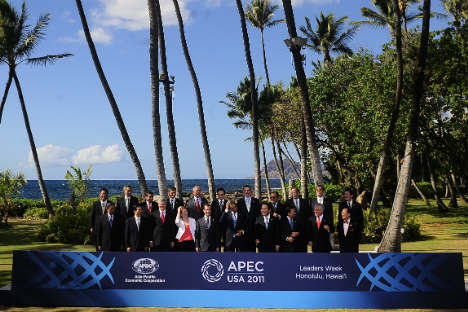 Shifting geographies of power: Leaders of APEC countries at the 2011 summit in Honolulu. Source: AP

Eying its integration into the Asia-Pacific community, Russia is firming up big plans to host APEC summit in Vladivostok next year.

Some might find the question of whether or not Russia is an Asian country somewhat rhetorical and contrived. One look at the map, however, is enough to find out that Russia has the continent’s largest landmass with an eastern seaboard occupying a sizeable chunk of Asia’s Pacific coast. Asia is home to Russia’s largest trade and economic partners, most importantly China, which has recently advanced to the top spot in terms of total trade turnover with Russia.

Nonetheless, many in Asia still consider Russia to be a “not quite Asian” country. Perhaps, this is because ethnically, religiously, culturally, and politically, Russia has traditionally gravitated more towards Europe than Asia. Or it’s because the bulk of the Russian population lives in the western part of the country. But most importantly, Russia has largely remained on the sidelines of the emerging Asia-Pacific community, despite its relentless efforts to take a rightful place in it.

Igor S. Ivanov is President of the Russian Council on International Affairs. Previously, he served as Minister of Foreign Affairs from 1998 to 2004 and Secretary of the Security Council of Russia from 2004 to 2007. Ivanov holds the rank of Ambassador Extraordinary and Plenipotentiary. He took part in several UN General Assembly sessions. He also served as Russia's ambassador to Spain.

Russia’s potential as an Asian power remains largely unrealised. This can be attributed primarily to the fact that Russia is too slow and at times inconsistent in rebuilding the economy of its eastern regions, and doesn’t create the required incentives for foreign investment, or Russian investment for that matter.

The Asian part of Russia faces acute unresolved issues in infrastructure, stimulating small businesses, and managing migration processes. In international affairs involving the region, we don’t always manage to grasp the logic of our Asian neighbours, which occasionally results in unfortunate miscalculations.

That said, our Asian neighbours are not quite beyond reproach either. It looks like for some of them, the Cold War never ended, as they continue building their Russia policy on principles dating back half a century. Others view Russia as nothing but a source of commodities from which to pump the resources they need – preferably on the most preferential terms. Still others believe that developing relations with Russia can be postponed until better times because the priorities of Asian policy lie elsewhere at the moment.

Against this backdrop, Russia’s forthcoming chairmanship of APEC in 2012 presents a unique opportunity to take a new look at Russia’s prospects for integration into the Asian-Pacific community as a part of integration processes emerging within this region. The Russian leadership attaches the utmost importance to its chairmanship. Recent months have seen meticulous preparatory work to flesh out the chairmanship’s agenda with real content.

Not only ministries, but also many regions and the expert community are taking an active part in this work. Considerable funds have been invested in preparing facilities to host events.

We believe that Russia’s chairmanship of APEC should be the starting point for developing multilateral cooperation in the Asia-Pacific region on a whole range of issues that are key to our country’s future.

First of all, there is the liberalisation of trade and investment and regional economic integration. Certain steps in this direction have been taken this year under the US chairmanship, and we are ready to move forward on this path towards free trade and investment in the region. Whereas the recent summit in Honolulu mainly discussed the current issues of trade liberalisation; next year, it would make sense to focus on the long-term outlook for integration of APEC economies, including taking into account CIS integration initiatives carried out by Russia, and on preventing financial and economic crises in the region and globally. It is APEC countries, which today account for the bulk of the global economy, that have a special responsibility for optimizing global mechanisms for regulating economic development.

Strengthening food supply security is another priority for 2012. This issue will likely become central to the global policy of the 21st century, and the APEC’s role in this can’t be overestimated. However, multilateral cooperation among the region’s countries is only just the beginning in this area. We lack a coordinated regional approach to food supply security risk management. The time has clearly come to deal with matters like reducing food price volatility, cutting losses resulting from transportation of agricultural products within the region, and coordinating national efforts to improve yields of basic crops. Obviously, the food issues are closely linked with environmental issues and preserving APEC’s biodiversity.

Another priority of Russia is developing the region’s transportation and logistical capacity. By virtue of its geographic location, Russia is a country of transit between Asia and Europe, but our intercontinental transport corridor capabilities are still far from fully utilised.

We need to accomplish a great deal domestically in this area, but the international dimension is no less important. Cutting costs and wait times at border crossings and implementing major infrastructure projects such as upgrades of ports, airports, and transport corridors through private-public partnerships should be discussed both during the year and at the Vladivostok summit.

Finally, the APEC summit in Vladivostok also represents an opportunity to promote an innovation agenda for Russia and the entire APEC region. How do we ensure the most effective forms of interaction between science, business, and government to promote new technologies? How can we bring cooperation among innovation centers, universities, research institutions, science towns, and territories active in innovations to a new level? How can we increase geographic mobility for scientists, educators, and innovators? How do we ensure protection of intellectual property rights in the region and reduce the turnover of counterfeit goods? What needs to be done to harmonise education systems? These questions are becoming increasingly important not only for Russia, but also our neighbors in the Asian continent.