Lars Håkan Danielsson: A job in Russia is what I really wanted 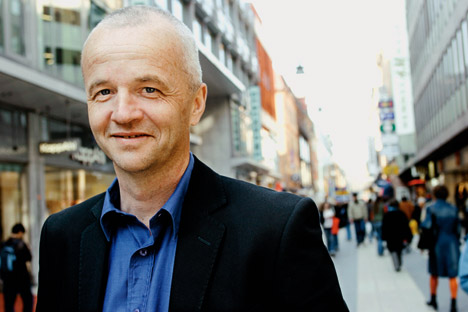 The new head of Allianz’s Russian operations, Lars Håkan Danielsson, has never worked in Russia or with the company, but is excited about the challenges and opportunities a job in the country offers.

Lars Håkan Danielsson, 50, has taken a step that not many would be willing to take – the Swede has become the head of German financial giant Allianz’s Russian operations, moving away from a familiar life in his native Sweden to Russia, a country that he doesn’t know. A job in Russia is a new challenge, something a top manager really needs, Danielsson admits – especially one who has never worked in Russia or with Allianz. Danielsson spoke with Russian daily Vedomosti about his thoughts and plans for the future as well as how Allianz will consolidate its position in the Russian market.

Lars Håkan Danielsson: I love it here. I can’t say that I had a clear picture of the country, but there haven’t been many surprises. Most of them have been pleasant.

Russians are indeed very friendly, kind, always ready to help and very generous. Of course you may ask, “Who would ever want to come here from Sweden to run a company?” The truth is, this country has very good people. And I became even more sure of this when I went to the regions. The way they welcome you and entertain you, it’s all very pleasant.

Vedomosti: What about unpleasant surprises?

L.H.D.: It seems that people in Russia can’t work in teams; they tend to take an individualistic approach. The bosses here are all very strong and competent people, but they don’t always succeed in making the most of their employees’ skills and knowledge. I was expecting this, but probably not to this extent. I’ve never worked in Russia before, but I have worked in neighboring countries – Latvia, Lithuania and Poland. The situations here and there are not very different, but this tendency is more conspicuous here. An important task for me is to unite people, make them work in a team. Another small surprise was that the difference in corporate culture between the three Allianz companies in Russia (Allianz, Rosno and Progress-Garant) proved to be more pronounced than I had expected.

Vedomosti: Over the last few years, some foreign investors have wound down their insurance business in Russia. Will Allianz be following suit?

L.H.D.: No: we’re moving in the opposite direction, we’re growing our business. We believe that the Russian market has potential.

Vedomosti: Would you say that Allianz is taking a bullish stance on the Russian market?

L.H.D.: They wouldn’t like that expression in Munich. Allianz is a pretty conservative company. It may be better to grow gradually in a managed way rather than try to take things by storm. Many aggressive companies come and go, but we’ve been in the market for 100 years and will stay. I like the words “purposeful” and “determined” more, because Allianz is determined to develop its business in Russia.

Vedomosti: What is Allianz’s strategy in Russia now?

L.H.D.: As a percentage of Allianz’s entire business, the operations in Russia aren’t very big. On the other hand, I’m convinced that as long as the European crisis continues, the growth potential in economies with saturated markets is very limited. But companies have to grow. It’s like riding a bike – if you fail to accelerate, you won’t succeed. Therefore, growth markets are very important, because that’s where the growth opportunities are concentrated. Shareholders want to see growth and profits, and in this context we are very important.

Vedomosti: Russian business is often short of transparency; kickbacks and other corrupt practices are routine here. How do you think we should combat them?

H.D.: It would be a mistake to think that other countries have fully transparent business, free from bribes and fraud. But for Russia, it’s a more universal problem than for most of the markets where I’ve worked. However, I’m not sure whether the problem here is worse than say, in Latvia. And this is a huge risk for a company like Allianz, because we have no options other than to work transparently. It means that from time to time we will have to say ‘no’ to the market, which reduces growth potential and is thus a serious issue. The Russian market works for a commission. There are many payments in cash and many personal sales. This combination creates many opportunities like those that you have described. How can we fight this? I think the only way in the long term is to develop Russian society. Insurance is integrated into the life of society. There will never be any separate rules for insurance and society. There are two reasons for this: the first is economic development, because the more we develop, the more bank transfers and fewer cash payments take place. Second is the development and improvement of the legislative system. Strict market control is also essential. All of this work is underway. It seems to me that the process is a bit too slow, but it’s moving in the right direction. I believe there’s also one more reason: the lack of trust. Sometimes there is no trust in companies, and sometimes there is no trust in people.

Vedomosti: Russia wants to build an international financial center in the Moscow region. What do you think about this?

L.H.D.: It’s a very interesting project. There are many candidate cities for the creation of a financial center in the world. Even such a small city as Stockholm wants to be one. I took an active part in this initiative in Stockholm – I was a member of a management panel that included representatives of financial institutions, the city, Swedish state agencies, etc. What about the infrastructure? What about taxes? What about specialists? What about the legal system? All these issues must be tackled. I think that two things are critical if Moscow is to succeed: The first is raising long-term capital. Long-term investments form the foundation. If you only have one or two direct investment funds, they will not be enough for the foundation; you need long-term capital. It’s good that owners of these funds are faced with serious difficulties over where to invest. Should they invest in state bonds? Fine, they offer a high interest rate.  But how can I be sure that they’ll pay? Or I’m sure that they’ll pay, but the rate is miserly. Joint ventures with the state are good examples of long-term investments. These can include the construction of airports, roads or prisons. This combination is very good.

L.H.D.: Yes. Setting up a real pension insurance system would be a good start, because it means long money. You receive money for 20, 30 or sometimes 40 years. The second thing is education and professionalism, because if you’ve got long-term capital and good people, you have an excellent foundation. This won’t guarantee immediate success, though. Additionally, it is important to develop rules and make sure that they’re predictable. If you want to have long-term capital, you need to ensure a predictable development of the regulatory framework and supervisory system. I want to be sure that the situation will not change dramatically within five years if I decide to move in this direction.

Vedomosti: The consistency and transparency of the rules of the game are pressing problems for Russia.

L.H.D.: It’s relevant for other countries as well. You know, I once visited Guernsey, which attracts substantial capital. The place is a sort of small town. I met with the finance minister, who told me, “We haven’t changed a single rule for investors over the last 15 years.”