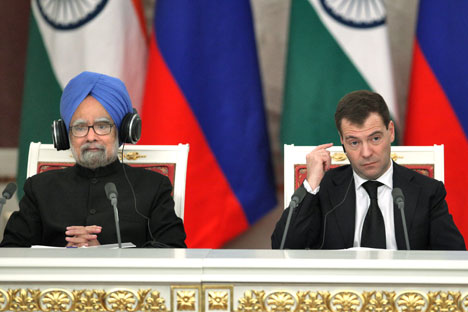 It's a year since the last Russian-India summit when New Delhi played host to Russian President Dmitry Medvedev. That is enough time for the earth to circle the sun. The sun of bilateral cooperation is still shining generously on the two nations and, during the meeting in Moscow, the parties will again reap a big crop of trade and economic agreements and make loud political statements about their common positions on the 21st century threats and challenges. Even so, there are spots even on the sun and politicians and experts in the two capitals who want the good weather to prevail in Russian-Indian relations in the future would do well to consider them today. This was mentioned in a half-whisper on the fringes of the Russian-Indian Forum on Trade and Investments, which was held with much fanfare at Moscow’s Marriott Hotel in November this year.

“The launch of the first unit at the Kudankulam nuclear plant in India, which is being built by Russia’s Atomstroyexport, is scheduled for the end of this year and that of the second – just six months later,” Russian vice premier Sergei Ivanov told the Forum. “Work on the terms of the contract for building the third and fourth Kudankulam units is nearing completion,” he said, adding that Moscow today sees India as “the main customer for our peaceful nuclear equipment and technologies.”

Meanwhile, the timeframe for the Russian-assisted construction of Kudankulam nuclear plant in the south Indian state of Tamil Nadu was in danger of being disrupted -- and not through the fault of the Russian side but because of protests by the local population. In the wake of the Fukushima nuclear plant accident in Japan, the protesters are voicing anxieties that a similar tragedy might happen in India.

The crisis around Kudankulam has put the Indian leadership in a tricky position on the eve of Prime Minister Manmohan Singh's visit to Moscow and his talks with the the Russian president. Until recently, the Kudankulam nuclear plant was a symbol of the “privileged strategic partnership” between Russia and India. The protesters seem to be unaware that the Russian AES-92 third-generation reactor project being implemented by Atomstroyexport meets all the modern requirements pertaining to safety of nuclear power plants. It has several levels of protection, as Russia has repeatedly stressed. However, some black PR methods have been unleashed against Atomstroyexport’s Indian projects. The Indian media outlets, citing anonymous sources, have alleged that Russia supplied “inferior equipment to India”. It is not unlikely that this was done at the instigation of the US and France, Russia’s key competitors in the Indian nuclear market.

Yet the most startling statement came from the chief opposition Bharatiya Janata party, which demanded that the Manmohan Singh government “resolve the Kudankulam issue promptly.” This is a thinly disguised call for the project to be scrapped. Thus, while previously there was a total consensus within the Indian political elite on cooperation with Russia, with not a single political force putting it in question, today we see attempts to make this cooperation hostage to internal political struggles. Even so, the unfortunate hiccups in Russian-India nuclear cooperation can't be attributed only to the current upsurge in political struggles in India and the increased activity of Moscow’s western rivals. Above all, it seems the US is in the forefront as after many years it has resumed nuclear cooperation with New Delhi and is staking out a claim in the vast Indian market, which is larger than the combined EU market.

The setbacks Moscow has suffered over the past year, notably in the sphere of military-technical cooperation, are probably due to its own awkwardness and failure to respond to the growing requirements of the Indian partners. The row over the Kudankulam plant coincided with a major setback for Moscow in military-technical cooperation with India, which, along with nuclear cooperation, is the main calling card of Moscow. In November this year, Moscow lost a major tender to deliver MI-28N “Night Hunter” helicopter gunships to India (to the tune of $600 million) to the American Apache H-24 helicopters.

It is symbolic that this was the second setback for Russian arms manufacturers in the Indian market within a year. In April, Russia lost out to the French manufacturers of Rafale and Eurofighter Typhoon fighter planes in the biggest arms tender of this century to supply India with a multipurpose medium-range combat aircraft, with Russia offering its MIG-35. The $10 billion deal would have involved the delivery of 126 fighter planes.

This time round, one has to admit that the setback to the Russian defence industry had nothing to do with politics. India sent to the Russian embassy in Delhi a letter listing 20 points by which the Russian MI-28N “Night Hunter” helicopter did not measure up to the Indian requirements. Considering such a long list of complaints, the Russian helicopter had no chance of winning the tender. One other reason for the Russian defeat was India’s wish to diversify its weapons sources and not to depend on Russia alone for 80% of its arms, as has been the case over past decades.

In general, the problems Moscow have encountered simultaneously in several key areas of cooperation with India indicate a new turbulence in the bilateral relations. “Despite the thesis of privileged strategic partnership, things are not all that simple. To preserve its position in the Indian market, Moscow will have to be more flexible and inventive,” says Nandan Unnikrishnan of the Indian Observer Research Foundation.

Needless to say, the officials of the two countries are reluctant to talk about the problems that are cropping up in the “privileged strategic partnership” between Russia and India. This is not surprising because nobody wants to mar the pretty picture for the upcoming meeting between Manmohan Singh and Medvedev in Moscow. Yet now is the time to assess the long-term consequences of mutual disappointments. If they accumulate, they may strip the decades-old special partnership of its former halo. There is still time to conduct a postmortem and make these relations immune to vagaries in political weather and market fluctuations.