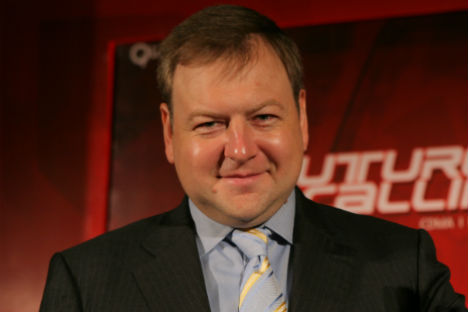 When MTS India started its operations, not only was it a late entrant but also a late CDMA entrant. Today, the Company has introduced so many firsts in the industry. How does it feel to have turned the under-dog into the innovator?

With its entry in 2008, MTS created a buzz with “One Million Free Minutes” for its customers. Since then, the company has built on its promise of innovation by introducing a series of firsts.

With 12-14 telecom operators fighting for market share, there was very little room for a new comer like us. We had to act quickly, and took the strategic decision to focus on data, a vastly untapped market.

In November 2009, we launched our high speed mobile broadband services brand, MBlaze. In just 2 years, we have become one of the country’s top-three data players. Along the way, we have introduced numerous innovations such as prepaid broadband and free national roaming for all MBlaze customers.

we focus on creating value for customers through quality, price and innovation
Vsevolod Rozanov

Recently, MTS took the mobile broadband experience to a whole new level by becoming the first telecom operator in the country to launch high-speed data (HSD) services on 2 national highways: Delhi-Jaipur and Chennai-Bengaluru.

Our decision to go with data proved to be right. Our efforts have been honoured by awards like ‘Most Innovative Mobile Broadband Product’ and ‘Fastest Growing CDMA Operator.’

True to its long-term commitment in India, SSTL has invested over US$2.5 billion in expanding its telecom network. Our focus is not just on numbers but also the quality of the customer base. India is probably the most competitive telecom market in the world with comparatively lower average revenue per user (ARPU), and, therefore, it becomes important that we rationalize our investments.

We understand that the Indian consumer is not looking for a choice between value and quality. Here, the customer wants quality with choice, and as service providers we need to be on our feet at all times to think out of the box. Our focus remains to create value for customers through quality, price and innovation propositions that create long term value for all stakeholders.

You have consistently mentioned that MTS India’s strategy is data-centric: voice-enabled. How do you see the data segment of the market evolving over the next five years?

As per the latest quarterly results declared by MTS India, the quarterly wireless (voice & data) subscriber base was up by 17% to 11.7 million. The blended mobile ARPU for the last three quarters remained consistent at INR 82, as against a declining trend in the market. In terms of data subscribers, the company registered a 40% increase. Currently MTS has 15 million wireless subscribers including more than 1.2 million data customers. The company has been performing well both in voice as well as data business.

We had pre-empted intense competition in the voice business and hence steered our strategy to focus on data. Even if you look at Telecom Regulatory Authority of India’s October 2011 report, the broadband penetration in India stands at just 1% as against the wireless teledensity of 72%. The National Broadband Plan envisages 160 million broadband connections including 60 million wireless broadband connections by the year 2014. Hence, there is a huge opportunity for the growth and proliferation of HSD services in India. With wireline penetration at just 3% of population, and on decline, mobile broadband is best positioned to satisfy the growing internet demand.

We offer HSD services in over 200 Indian cities including the top five metros. The company is rapidly expanding its HSD network, and currently addresses over 92% of data potential across India. In MBlaze, we have one of the strongest data brands in the country.

Where do smartphones fit in this strategy?

India’s low wireline and PC penetration means that smartphones and tablets will drive data growth. This growth in data usage is creating new user categories - terabytes of data are being uploaded and downloaded every hour enabled by ‘on the move’ access to the internet.

MTS is creating a strong portfolio of these devices to offer the customers a complete package with access and high-speed. We recently launched MTS Pulse, an Android powered smartphone that users can get for free with no upfront payment. We are looking to take the power of Android platform to the masses. To this effect, we recently launched two Android smartphones – MTS Livewire and MTS MTag 3.1, both priced in the under Rs. 5000 category.

On the VAS front, we are closely working with the developer community to offer innovative applications. One of the most popular applications is the MTS TV, a free to download application that provides our data customers ‘on the move’ access to more than 100 Live TV and video on demand channels.

Going forward, we will continue to enrich our device portfolio by adding some of the best available smartphones and tablets.

How did you receive the New Telecom Policy announced by Kapil Sibal? What are its promising and worrying aspects? If you had one wish, what would you ask Kapil Sibal for?

We welcome the spirit of the Draft of New Telecom Policy that has been recently announced by the honourable Minister of IT & Telecom. The policy puts strong focus to make broadband accessible to and affordable for all by 2015. This is a great step for us as we are already data-centric.

To make all this happen, we look forward to the formulation of supporting policies so that more spectrum can be released. Clarity, on the further spectrum allocation is of immense importance, thus we believe that initiatives towards a separate Spectrum Act will help industry grow in the long run.

We believe policy guidelines on issues like delinking of spectrum and telecom license, allowing for spectrum trading, pooling and sharing along with new M&A guidelines would be equally significant. One also needs to understand, how NTP 2011 seeks to look after the interest of the CDMA operators and their customers.

So if I could have one wish, MTS would ask for further clarity on M&A guidelines and spectrum updates.

As we move in to the next year, broadband accessibility, quality content and affordable devices will drive the growth as far as the data is concerned. However, there is still a strong need to inform and educate the consumer about the vast benefits of internet. Right now, even when customers are buying smartphones, they are not using them to the devices’ full potential. The majority of customers still use high end smartphones almost entirely for voice.

Clearly, we will continue to focus on our data-centric: voice-enabled strategy while bringing the best to our customers. We have a strong pipeline of devices that includes a range of smartphones and tablets for the next year.