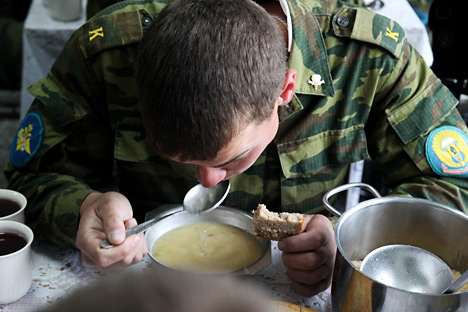 For thin, young men in the Voronezh Region, the first month of military service is somewhat unusual. Here, recruits who weigh in below the army’s standard weight are sent to a kind of health center where they can fatten up.

“I want to see a nice thick layer of butter,” said Artur Palchikov, commander of the sixth platoon, walking between the tables where his charges sit. “Ivanov! I said spread the butter! We are going to swallow every single crumb, down to the last calorie.”

Then, the commander reads from a breakfast menu: “Starters: smoked sausage. First course: beef meatballs, buckwheat. Second course: oat porridge with milk. You will all help yourselves to hot chocolate, bread and butter, as much as you can eat.” A voice pipes up: “And what if I can’t manage the buckwheat and the oat porridge?” The answer is immediate and authoritative: “You just eat!”

The Dzerzhinskiy health center keeps itself on a strict routine. The recruits have five high-calorie meals a day, a nap after lunch, a swimming session, massages and oxygen cocktails. More than 150 young men eligible for military recruitment have been brought here from all over the Voronezh Region.

“The main aim of this was to increase the number of men who are medically fit for military service,” said Nikolai Kolesnikov, head of Voronezh’s regional center for preparing army recruits. “We basically sent them here to put on weight.”

The potential recruits range in age from 18 to 26. Some of them have just graduated from high school, some are students, while others have already graduated from some institute of higher education.

After breakfast it’s time to weigh in. The young men form an orderly line and their weights are recorded in a special ledger. Nikolai Ivanovich takes a long look at the figures, and then rubs his hands in satisfaction: “Nearly everyone has put on weight! Give it another a month and we can let them go.” For their part, many of the new recruits wouldn’t mind staying longer.

At first no one was very excited by the prospect of going to the health center. Some even hoped that being underweight would disqualify them from having to do military service at all. But the military recruitment offices urged the skinny guys to sign on for a month at the health center, telling them that it would be a time of relaxation that would count as part of their military service, and adding that they could always leave if they didn’t like it.

But as it happens, most of them do like it. It’s kind of like camp. The recruits play pranks like writing on each other in toothpaste at night, and they often went to a small shop down the road to buy cigarettes and beer – until Nikolai Ivanovich issued the shop owner a strict order not to sell beer to the recruits.

The officers have started going on patrol at night, employing their own special surveillance tactics to establish what is going on. “I count the number of legs I see and divide this figure by two; this tells me how many of them there are,” said Vladimir Buzdin, commander of the fifth platoon, and a veteran of the Afghan war.

But the recruits have also put their military training to good use. “After lights out we set up a trip wire,” said Dima Fursa. “There’s a piece of string in the corridor, we attach a jar to it, and inside there’s a metal torch. Our commanding officer recently learned what one of these traps was about - a loud noise rang out round all three floors, and we all managed to turn off the lights and clear away the card games before he could get to us.”

“Now, it seems like the boys have had enough to eat,” said Olga Tekutyeva, a waitress at the health center. “When they arrived, they had massive appetites, always asking for seconds and thirds, even though our portions are pretty big to start with. At first we didn’t have time to cut the bread to keep up with the demand. But these days there are tons of leftovers.”

Like most of his fellow inmates, Vanya Kozhin can’t put a finger on why he was thin when living at home, and has now started to put on weight – from 123 lbs to 132. Vasya Kolesnikov blames the fact that he spent so much time in front of a computer: “I sat there practically dead to the world and my mom couldn’t call me to the table.” Nikita Popov thinks he was studying too hard: “When I was at college my entire daily food intake consisted of one hamburger. And I just drank tea in the morning.” Parents have their own theories – many mothers complain that their sons only ate fast food when they were small, as they refused to eat anything else, and when they grew up, they lived off soup and potatoes.

But other young men here have never had enough to eat – they were orphans, or came from poor families. Some of them are already married. “Some of these guys are stick thin not because of any illness,” said Vladimir Mikhalenko. “They literally don’t have enough to eat. One guy was virtually in tears, saying: ‘I’m here stuffing my face, and my family at home has nothing on the table.’ His wife, his six-month-old baby, his ailing parents, his grandmother and his grandfather all live together in a two-roomed flat. So we all chipped in and gave him some money and a bag of food, and he took this home to his family on the weekend.”

Over the course of the month, young father Ivan Khuraganov (aged 23) has gone up from 125 lbs to 134. A tattoo on his hand, a chalice with a snake – has gotten noticeably wider. Ivan is happy to be joining the army; he’s not worried to be leaving his wife and young child. Vladimir Mikhaylenko says this is not unusual: “For some people the army is something of a saving grace. First of all, it means there’s one less mouth to feed at home, and secondly the state will provide for the family while the main breadwinner is away.”

The full text of this article was published in Ogonyok magazine.