Vladimir Vysotsky: Hamlet with a guitar 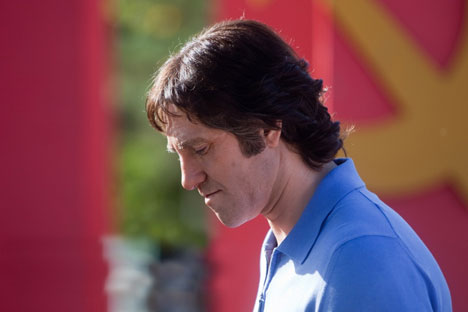 Vladimir Vysotsky, the Soviet prominent musician has become a cult figure in Russia like his western counterparts Jonny Cash or Bob Dylan did in America. The recent movie about his life "Vysotsky, thank you for living" indicates that his popularity has grown over the years.

Among all Soviet musicians, Vladimir Vysotsky is one of – if not the – most popular. He is also the one whose place in history and in the hearts of Russians has grown the most over the years. His blue Mercedes and his style of singing have made their way into the Russian emotional landscape. Like Jonny Cash, Serge Gainsbourg or Bob Dylan, Vysotsky has become a cult figure.

Since his death 31 years ago, displays of admiration have multiplied: Statues of the troubadour have been erected in Moscow and Yekaterinburg; numerous Ph.D. theses have been written about him along with books, biographies and song collections; and his grave in the Vagankovskoye cemetery always seems to be draped with fresh flowers. In addition to his grave, fans make a pilgrimage to the State Vysotsky Cultural Center and Museum, located next to the Taganka Theater, where the artist's photographs, documents, suits and manuscripts are displayed.

Vysotsky is one of the most prominent Soviet artists. Source: Archive Photo

The latest tribute to him is a film. On Dec. 1, the film "Vysotsky, Thank You For Living" was released. Produced by Konstantin Ernst and Anatoly Maximov, it took almost five years and $13 million to make. Screenwriter Nikita Vysotsky, who is also Vysotsky’s son, emphasized at a press conference that, although based on real-life events, this is a fictional film featuring a dramatic time in Vladimir Vysotsky's life: His tour in Uzbekistan in 1979 when he had a near-death experience. He died almost a year to the day later.

According to Nikita Vysotsky, he heard this story from actor Vsevolod Abdulov and decided to make it the focal point of the film. The result is a script detailing several days of his father’s life, featuring the KGB, unauthorized concerts, love and his friends.

The actor playing Vystosky is a secret. The press and the blogosphere have guessed that it is Sergei Bezrukov (an actor famous for playing many deep Russian poets) or Vladimir Vdovichenkov (whose looks resemble Vysotsky’s). However, the filmmakers have kept silent, building the intrigue. Every day, make-up artists spent five hours getting the lead actor ready for shooting in order to make him look as much as possible like the real Vysotsky.

The film not only tells the story of the poet and musician, but also reflects the atmosphere of 1970s. “Vysotsky” was shot using rare Soviet lenses, some of which were borrowed from personal collections. Cameramen worked with modern video cameras customized to fit the old lenses.

In the film, Vysotsky's friends swing around in the foreground, as if on purpose, so that the cameras are unable to capture the main character. These friends are all created for the film, although they are based on real people or composites of real people.

Born in Moscow on Jan. 25, 1938, Vysotsky had a normal childhood for the period. He began studying engineering in 1955 under pressure from his family, only to drop out just a semester later to become an actor. In 1956, he entered the Moscow Arts Academy. He almost was denied admission due to his voice, which, ironically, is part of what made him so famous.

After graduating in 1960 and working in different theaters, Vysotsky joined the Taganka Theater in 1964. There, he played about 20 roles. Vysotsky also appeared in 26 films and wrote almost 1,000 songs, as well as several collections of poems. Put together, his songs form an encyclopedia of the Soviet era. Vysotsky's deep, raspy voice and the intensity and passion that he put into his work made the audience feel as if it were experiencing the adventures that he sang about. In addition to his moving performances, Vysotsky was also capable of using formal Soviet language in ways that allowed his songs to have multiple, even contradictory layers of meaning. This made Vysotsky an "aSoviet" rather than an "anti-Soviet;” he was able to stimulate thought-provoking discussion without completely breaking from the political system.

Vysotsky's unorthodox fame and his extravagant ways – including owning a Mercedes and marrying French actress Marina Vlady – caused suspicion and envy. But he played the system, doing concerts throughout small cities and announcing his performances just a few hours in advance so that local authorities would have no time to consult with Moscow on whether to ban them or not.

And, his fame was such that whenever one group of KGB agents found out about his next upcoming concert, agents from another KGB department would provide counter-information to mislead their colleagues and be able to attend the performance.