What attracts foreign investors in the Orel Region? 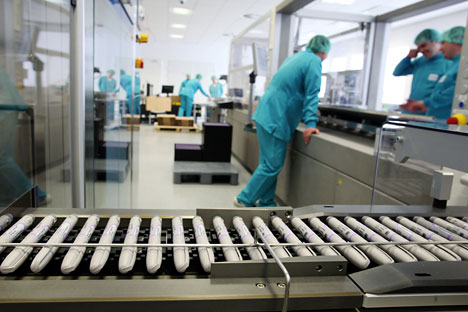 The France-based Sanofi-Aventis, a global leader in the pharmaceuticals market, acquired an insulin producing plant in the Orel Region. Source: ITAR-TASS

Which Russian region has been the most successful at attracting foreign investment? Surprisingly, it’s not Moscow or the Leningrad Region, but Orel – which has just been awarded the Investment Angel prize by the World Organization of Creditors.

Russia Beyond the Headlines correspondent Vladimir Ruvinsky met with Yury Yesipov, head of the Orel regional government’s economic department to find out what draws foreign investors to the region.

Russia Beyond the Headlines: Your region has been awarded a prestigious international investment award, the Investment Angel. How much did direct foreign investment increase in 2010?

RBTH: What drove this surge?

Y.Y.: The surge can be primarily traced to the arrival of two global giants in our region: the France-based Sanofi-Aventis and the U.S.-based Lincoln Electric. Aventis, a global leader in the pharmaceuticals market, acquired an insulin producing plant in the Orel Region. Lincoln Electric, in turn, dominates the U.S. market for welding products and equipment. It is planning an expansion into the CIS and Russia, and, as a first step, it acquired two plants in the Orel region.

RBTH: Does that mean that the investors decided to buy the plants after calculating their profitability?

Y.Y. When any foreign investor is considering entering a certain region, the first thing they assess is the political and economic situation in the region.

Our region’s governor has made creating a comfortable environment for living and doing business our main task. This involves minimizing administrative barriers and maximizing help and support. When investors approach us for support in executing a deal, we do our best to help them. We have been resolving all issues in the shortest possible time, and assigning each project or investor a separate account manager to help the investor deal with all the administrative bodies involved. In other words, the account manager becomes an aide to the investor.

Y.Y. As far as the basic economic indicators go, the gross regional product (GRP) stood at $3.5 billion in 2010, and we expect it to reach $4 billion this year. The industrial sector is responsible for the largest share of it – with more than 26 percent of GRP.

RBTH: What do you expect from investors?

Y.Y.: There is no fundamental difference for us between foreign and Russian investors. What is essential, however, is that money must be invested in the region’s economy, new jobs must be created and taxes paid.

Meanwhile, we have to always bear in mind that potential investors include so called chancers – intermediaries who promise the earth but deliver nothing. I used to deal with quite a few of them: they introduced themselves as representatives of certain companies acting under powers of attorney and promised huge financial benefits. Truth be told, I got carried away with the projects, but as we went deeper into it to thrash out the details, it would usually turn out to be pure fiction.

RBTH: What new investment projects are planned for the Orel region in the next few years?

Y.Y. We are now in talks over five relatively big investment projects.

The first one involves a production facility to be opened by the German agricultural equipment producer Amazone – one of the global leaders in the sphere. The company’s owners have already set their sights on a certain factory, and I hope the project will be launched in 2012.

The second project envisages the creation of a major logistics hub in the region by Russia’s top retailer X5 Retail Group. The retailer found our proposal attractive, and we are 90 percent certain of its positive decision on the logistics center.

The third project involves the reconstruction of the Orel railway station in conjunction with Russian Railways to transform it into a transport hub and a business center. Negotiations are proceeding successfully, and the project will start receiving financing next year.

The fourth project focuses on the development of an animal breeding cluster – pig breeding, to be precise. We have completed talks with the Cherkizovo Group, which is planning to build another pig breeding farm here next year.

The fifth project is linked to the construction of two cattle farms by Miratorg Agribusiness Holding, one of the leaders in livestock breeding. The total investment in the project is estimated at over 2 billion rubles.

There is yet another important project involving the creation of an industrial park in the region. In April 2011, the governor approved a long-term program on encouraging investment activities, featuring an industrial park as one of its crucial elements.

RBTH: What companies are you looking for, and in what industries do they work?

RBTH: Whatterms can you offer?

Y.Y.: First of all, we offer investors preferential lease terms on land for the construction period, and when the construction work is completed, the investor will be entitled to purchase the plot. Second, we build the infrastructure for the plots at the expense of the regional budget.

On June 1, 2012, during the economic forum in Orel, we are planning to stage a roadshow for the industrial park. Hopefully, by that time we will have our first residents for the park, who will be able to appreciate the potential efficiency of this investment tool.