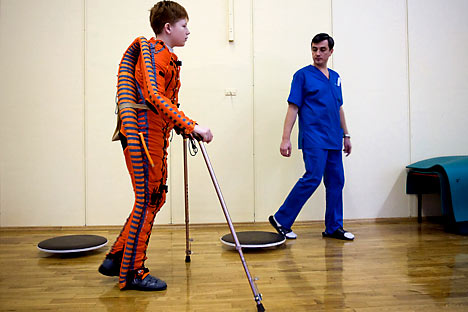 A job of the social worker will be in demand in Russia in the near future, experts said. Pictured: A rehabilitation center for children with the paralysis syndrome in Moscow. Source: ITAR-TASS

Tony Widmer used to be an ordinary social worker, one of many thousands in the UK, but Prince Charles recently awarded him the honor of Officer of the British Empire at Buckingham Palace for his service of co-operation between the UK and Russia in social work. It all started with one tourist trip to Moscow.

“In 1991, I came to Russia as a tourist and I liked it here so much that I wanted to come back,” Tony Widmer said. Fortunately, fate intervened. Shortly after his trip, he happened to meet with a Russian delegation of social workers that came to Glasgow to learn from the British experts. Tony thought that it would be more useful and cost effective for him to move to Russia and teach Russian social workers there. A charitable foundation gave him some money, and the Briton was off to Russia to introduce to the people the social worker profession.

It was a new concept for many; there was no such occupation in the Soviet Union. The functions of a social worker were performed by different people in different parts of society – such as a political instructor in the army, a juvenile officer in the police, or an educational worker in school. In 1991, “social worker” became an official occupation. 20 years later, this profession remains a mystery to many Russians. Some think social workers help senior citizens or the disabled. Very few are aware that social workers often help people cope with unexpected tragedies in their lives.

“I remember working with a guy in the UK who was in a horrible motorcycle accident and had broken his spine. I had to help him come to terms with his situation and get him back to an active life. We talked a lot about his love of bikes, and I asked him once: ‘Why don’t you try and write about it?’ He is now quite a successful writer – he writes stories about bikers’ lives,” Tony said.

It is hard for a person who lives a full life to imagine that one day something bad could happen, that he or she may need serious help. But no one is immune to this. One of the best examples of the need for social workers was after the tragedy in Beslan in 2004. Tony flew to Beslan three days after the hostage crisis was over. There, he and his team worked not with the victims of the terrorist attack, but with local social workers that also needed urgent support; they were close to the victims in their darkest hours – they went to morgues to identify bodies, helped during funerals and then stood by so as not to leave people alone. The emotional and psychological burden was so great that they could not stand it. Eventually many broke down and could not force themselves to go and see those who had lost their children or try to bring them back to normal life.

“We taught them special techniques to prevent emotional burnout. We also persuaded local authorities to pay attention to this problem – to provide social workers with more time for recreation, to send them to health resorts. We even created a club for them to do other activities for some downtime,” Tony said.

The two decades that Tony has worked in Russia have been filled with many important projects: The creation of social assistance centers for retired servicemen, psychological assistance to the widows of the Kursk submarine victims and families of deceased miners in Kemerovo region as well as work with senior citizens and the disabled. He has seen more or less all of the difficulties of life in Russia.

Tony’s first project in Russia was the creation of a center for social assistance for retired servicemen. In the 1990s, the Soviet Union was withdrawing its troops from Germany and officers were returning home, where, as a rule, there was no one waiting for them. There were no homes and no jobs. Families were living in kindergartens, where sheets were used to divide common areas into small box-shaped rooms. Young, strong men who were used to being useful suddenly found themselves totally helpless in this hopeless situation. Some started drinking, others tried to commit suicide.

Tony said that he remembers a similar situation in the UK after World War II. Then, many officers were trained as social workers. His first boss was a former military pilot. “We organized six-month training courses for retired officers to teach them new professions. After that, some of them created similar centers, others started teaching. Not all of them turned into highly paid specialists, but I know that most of them managed to find their place in a new life.”

In addition, experts who work to predict what jobs will be most needed in the future are certain that social work is a job of tomorrow, and social workers will always be in demand. This is due to the fact that no country is immune from trouble, even the most successful ones – even Japan, for example. The current global financial crisis will most certainly affect many people, some who will require emotional support.

This profession can become a good option for those who do not want to retire early and cannot find a job that suits their status and education. Many seniors in Russia complain of ageism, but in the realm of the social worker, life experience and knowledge are valued.

Tony Widmer, whose organization in Russia works a lot with senior citizens, believes that the idea of engaging them in social work is interesting. This means that they may soon have special retraining courses. Tony himself is 68, but he is cheerful, full of vitality and is not at all ready to retire – he loves his job too much.