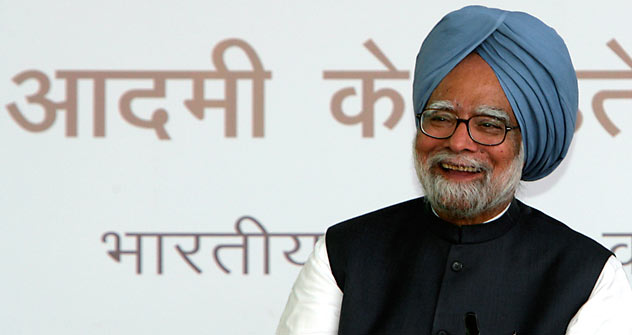 Up to ten cooperation agreements, mainly in the defense and energy spheres, will be signed during the visit.

The sides will also discuss a number of international problems.

Shortly before his visit, the Indian premier said Russia-India relations are unique.

“It is impossible to draw any parallels or compare the relations between India and Russia and our relations with some other countries. We [India and Russia] have a specially privileged strategic partnership,” Singh told Russian journalists accredited in India.

The bilateral military cooperation program in particular stipulates that Russia will transfer the K-152 Nerpa attack submarine to India on a 10-year lease by the end of 2011. The deal was signed in 2004.

Other aspects of cooperation include the planned delivery of INS Vikramaditya (the former Soviet aircraft carrier Admiral Gorshkov) to India in December 2012 after an upgrade, and the contract to supply India with 80 Mil Mi-17 Hip-H helicopters, expected to be fulfilled by the end of 2013.

On December 16, Dr. Manmohan Singh will have talks at the Kremlin with President Medvedev, in restricted and expanded formats, at which global issues will be discussed, bilateral ties reviewed, and guidance provided for future engagement, said in a press release the Embassy of India in Moscow.

This will be the 12th India-Russia Annual Summit meeting since the declaration of the India-Russia Strategic Partnership in 2000. The tradition of Annual Summits has contributed to the evolution of the close and time-tested friendship between India and Russia into a special and privileged Strategic Partnership. The high-level interaction between the two sides had intensified even further in recent years. Thus, in 2009 there was a State Visit to Russia by the President of India, H.E. Pratibha Patil, and two visits by Prime Minister H.E. Dr. Manmohan Singh (for the Annual Summit and the BRIC Summit). In 2010, both H.E. President Medvedev and H.E. Prime Minister Putin paid visits to India. In 2011, H.E. Prime Minister Manmohan Singh met with H.E. President Medvedev at the BRICS Summit in Sanya and the two leaders would now meet for the Annual Summit. At least two visits to India by the President of Russia are in the pipeline for next year – in March for the BRICS Summit and in December for the Annual Summit to be held in New Delhi.

Attention at the forthcoming Annual Summit talks would be devoted to global and international issues of common interest and concern. Ambassador of India to the Russian Federation, H.E. Mr. Ajai Malhotra, stated: “India and Russia are large countries with growing economies and considerable and increasing influence within the international system. We have identical, close or common perspectives on a very wide range of international issues. Global challenges make it imperative that we further intensify our dialogue on issues such as the need to revive the world economy, the situation in West Asia and North Africa, challenges in neighbouring Afghanistan, cooperation within BRICS, as well as new threats posed by such issues as climate change and piracy.” He pointed out: “The world is witnessing a profound transformation and a shift in the global balance of power. Our relationship serves as an anchor of peace and stability during this transition phase. Together, India and Russia can help shape global responses and the changes underway offer an opportunity to bring about an international order that is democratic, inclusive, based on the supremacy of international law, and consistent with the objectives and principles contained in the UN Charter.” He emphasised that discussions on these topics acquire special relevance at this Summit, as India would serve as the Chair of BRICS in 2012 and host the next BRICS Summit in late March 2012 in New Delhi. He also recalled that India and Russia cooperate closely in international fora, including the UN, besides at meetings of the G-20, BRICS, SCO, and in other formats.

Ambassador Malhotra indicated that bilateral cooperation in defence, space, atomic energy, hydrocarbons, and science & technology, are amongst issues likely to be discussed at the Summit, describing these sectors as “pillars of our unique relationship, which have led to steady benefits accruing to both countries”. In addition, special attention at the Summit would be devoted to the trade and investment dimension of India-Russia ties. “Efforts are underway to see that they better reflect the contemporary realities of the over US$ 1 trillion size of our economies as also exploit the immense untapped opportunities that exist”, he emphasized. “With Russia joining the WTO, accelerating its economic reforms, and upgrading its Custom Union with Belarus and Kazakhstan to a ‘Common Economic Space’, new opportunities for trade and investment cooperation will open up. Indian businessmen are attracted by these prospects.” he stressed. “We will also explore the possibility of creating a joint investment fund, study a possible Comprehensive Economic Cooperation Agreement with the broader Eurasian region, encourage greater connectivity through the North-South Transport Corridor, and so on”, he revealed. India-Russia relations rest on a firm base, are characterized by mutual trust, and are set to expand and diversify even further into new areas.  “In particular, there are ongoing efforts to strengthen bilateral linkages in sectors such as steel, fertilizers, pharmaceuticals, coal, diamonds, telecommunications, oil & gas, and IT”, he emphasized.

Business and S&T cooperation will receive a boost on the eve of the Summit, with the inauguration in Moscow of the Russian-Indian Scientific & Technological Centre on December 15, 2011. Ambassador Malhotra stated: “This new Center will seek to commercialize the results of joint India-Russia R&D efforts. This initiative is of particular importance to both countries in their effort to encourage innovation and modernisation”.  A similar Center would be opened in New Delhi early next year, he announced.

Attention is also to be given to exchanges in the educational and cultural fields. Underlying our cooperation is the trust and immense goodwill existing between us and the people-to-people contacts between our entrepreneurs, journalists, youth, academics, parliamentarians, artistes, and others. The forthcoming Annual Summit can also be expected to endorse the commemoration of the 65thanniversary of India-Russia diplomatic ties in a befitting manner on April 13 next year. A wide range of academic and cultural activities, seminars, exhibitions and other events are being planned to mark the occasion, which would also provide an occasion to spread greater awareness about each others’ growing capabilities and latest achievements.