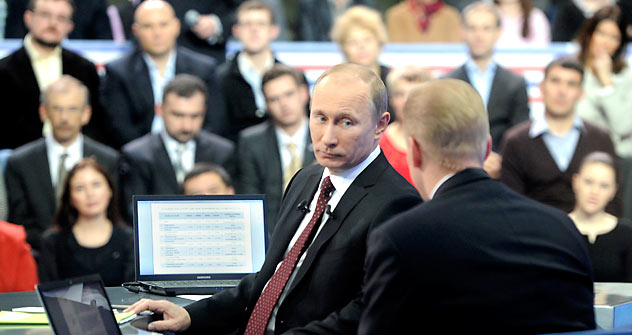 Prime Minister Vladimir Putin launched his presidential campaign today during his annual "meet the people" teleconference, that included several questions from the audience about the disputed parliamentary Duma elections on December 4.

In what appeared to be a swipe at oligarch Mikhail Prokhorov, who announced his candidacy on Monday, Putin said: "People shouldn't elect people simply for some hand out from the oligarchs or their representatives. They need to elect people that they respect, who have done something for the country," Putin said.

Clearly, Putin is going to run on his achievements and he has many to boast of, which he ticked off. Echoing the main points of bne's "despair index" ( The poverty of nations), the sum of unemployment, inflation and poverty. Putin pointed out that poverty has fallen from 29% of the population when he came to power down to a post-Soviet record of 12% (currently lower than the level in most countries of the West). Unemployment has also fallen to 6%, lower than its pre-crisis level, while inflation is also a record low of about 6-7%.

"For Russia this is a very good result. In the UK inflation is 5%. Russia's inflation is approaching the levels of the European Union," he said, adding that debt has fallen from 120% of GDP to 2.5% of GDP. "This is a solid basis for a sound economy and the foundation of a social system."

He also directly addressed the fears of the population and the demands of the recent protestors.

"We need to expand our democratic system so that the people feel in closer contact with the authorities at a regional and federal level; we need to build up more trust [between the people and the government]," said Putin.

But he couldn't help having a dig at the West after the US admitted to funding opposition groups, saying the system must be strengthened to stop “foreign interference” in Russia politics.

However, in a concrete move to improve the transparency and accountability of the elections, Putin said that CCTV cameras would be installed at every polling station so "the whole country can see what is happening at every ballot box."

The idea of the cameras is a piece of reassuring political theatre, which will nevertheless improve transparency a bit. However, the allegations of ballot stuffing by independent observers claim that sealed ballot boxes arrived at polling stations already containing completed ballots.

The cameras may help placate some of the anger and foster some of that feeling of "trust" that Putin wants, but they won't solve the problem of electoral manipulation. What is needed is a comprehensive system of checks and independent observers to validate the count where all parties are represented in overseeing the ballot boxes, not just state bureaucrats. That is the only way to make the vote believable. If Putin was really serious about ensuring the veracity of the vote, he could have, for example, invited the OSCE to send in an army of election monitors observers. Still it was a nice touch.