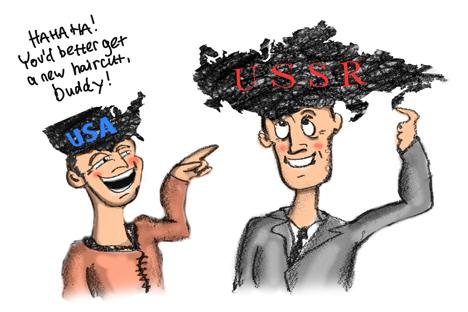 The West took jokes about the Soviet Union with complete seriousness, particularly during the 1970s and 1980s. Rossiyskaya Gazeta recalls some of the more popular jokes of that era.

People in the West took jokes about the Soviet Union extremely seriously. West German Chancellor Willy Brandt is known to have enjoyed telling them in the 1970s. But the greatest fan of the genre was United States’ President Ronald Reagan, who used to order the State Department to collect and send Soviet jokes to the White House every week.

The result was that Paul Goble, head of the State Department’s Balkan unit during that time, collected more than 15,000 jokes pertaining to the Soviet Union, according to documentary filmmaker Ben Lewis. Reagan, for his part, often quoted them in his speeches and during negotiations, such as when Mikhail Gorbachev visited Washington, D.C. During a press conference following talks with Gorbachev, President Reagan said that the Soviet leader had laughed at the joke he had told him: “Two men are walking down a Moscow street. One of them asks: ‘Is this real Communism? Are we already out of Socialism and into Communism?’ The other man replies: ‘No, not yet. Things still have to get worse for that.’”

In a 1988 speech, Reagan said: “I have been collecting funny stories that Soviet people tell one another for many years. These jokes reveal not only a fine sense of humor, but also a cynical attitude towards the system. Here is one that I didn’t even tell Gorbachev: A man goes to buy a car. He pays the money and the salesman says: ‘Come and collect your car in 10 years.’ The buyer asks: ‘In the morning or in the evening?’ The salesman replies, ‘What difference does it make if it is 10 years from now?’ The man replies: ‘A plumber is due in the morning.’”

Another joke from Reagan’s collection: “You know that Comrade Brezhnev has such a fine sense of humor that he collects all the jokes told about him?” “Yes, that’s true. But he also collects the people who tell them.”

Yet the best-remembered jokes are those based on real events.

The journalist Genrikh Borovik told a story about a trip that he once took: “I was flying from New York to Moscow. Next to me were sitting two Americans, a man and a woman. We were served a meal and the woman said: ‘You can see at once that this is Russian food – everything is tasty and the chicken is well cooked and the mustard is just wonderful.’ The man replied: ‘Shame on you, what you are saying? The scrambled eggs are underdone, there is not enough salt in the rice and the tea is without sugar; it’s simply awful. That’s the Soviet Union for you.’ I then called the flight attendant and asked, ‘Could you tell me where this food was cooked, please?’ She replied: ‘Why, in America, of course.’”