Enemy at the door? 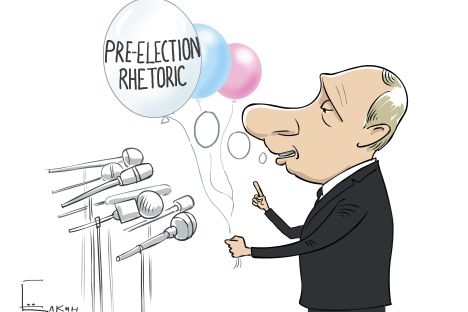 In the absence of a domestic policy platform, foreign policy could play a bigger role in Russia’s presidential election campaign.

In an attempt to sugarcoat the poor performance of the United Russia party in the Dec. 4 Duma elections, its supporters argue that the party’s results conform to “European standards.”  Although there are several reasons to question this argument, one stands out: In mature European democracies, parliamentary elections are usually run “on issues.”  In contrast, the just-concluded Duma election campaign was essentially issue-free.

The bulk of the blame goes to United Russia itself. Having failed to formulate a coherent, modern-day ideology, the party largely relies on its association with the executive branch of Russian government – hence United Russia’s efforts to take credit for every “achievement” paid for with budget money. Yet, its electoral opponents hardly faired any better: none of the six political parties participating in the elections alongside United Russia has succeeded in designing an election platform attractive to voters. Instead, with United Russia’s ratings steadily falling, they preferred to sit on the sidelines and watch the party of power lose its mandate with the Russian voters.

In particular, the topic of foreign policy almost never came up in the election debates.  Two factors could account for this omission. First, Russia is not at war, and there are no major armed conflicts on the country’s borders. Absent a clear threat to Russia’s national security, Russians – just like their counterparts everywhere – prefer to stick to domestic issues.

Second, foreign policy in Russia is an exclusive domain of the executive, normally the matter of interaction between the presidential administration and the Ministry of Foreign Affairs – except that in 2008, a third player was added to the mix: the office of Prime Minister Vladimir Putin. In this arrangement, the role of the Duma in defining the country’s foreign policy remains almost purely symbolic and is usually limited to approval of foreign treaties.

International issues may come back to the forefront of public discussion during the presidential campaign, which is now underway, and this discussion seems to have been already initiated by the leading candidate, Vladimir Putin.

In part, Putin’s interests in foreign affairs could be driven by tactical considerations.  The public demand for Putin’s marquee achievement, stability, seems to be diminishing, and simply picking up President Medvedev’s “modernization” banner could be problematic: Putin may be asked why it’s him, not Medvedev himself, who’s running for president. Until a dominant election campaign theme is formulated by Putin’s advisors, he might have no other convenient topic but discussing Russia’s relations with the outside world.

While the attention of Russian officials to the problem is quite understandable, it’s the tone of their responses that sounds somewhat troubling.  Speaking at a meeting in support of United Russia on Manezh Square in Moscow on Dec. 12, Russia’s ambassador to NATO, Dmitry Rogozin, warned of the danger of Russia becoming “easy victim” at the hands of some (unnamed) hostile “forces in Europe.”  Of course, it’s easy to simply dismiss yet more anti-Western vitriol from the perennially hawkish ambassador if not for the fact that the day following the Manezh meeting, Rogozin joined the leadership of Putin’s election campaign.

Putin himself caused a stir by accusing the United States and Secretary of State Hillary Clinton personally in inciting the protest actions in Russia that erupted in the wake of announcing the Duma election results.  According to Putin:

“[Clinton] set the tone for some [opposition] activists inside the country and sent them a signal.  They heard the signal and began active work using the support of the U.S. State Department.”

It’s almost inconceivable that Putin doesn’t understand the absurdity of this accusation. Yet the image of the enemy at Russia’s door is likely to resonate with many in the country, where mistrust for the United States still runs deep 20 years after the Cold War formally ended.  Interestingly, Putin’s point of view was enthusiastically endorsed by the leader of the Communist party – and, incidentally, Putin’s rival in the presidential race – Gennady Zyuganov who called the opposition’s meetings “an Orange leprosy” organized by the “American secret services.”  There is no doubt that the subject of foreign interference in Russia’s domestic affairs will feature prominently in the election debates.

Putin’s harsh anti-Western rhetoric could be a cold shower for those who just a couple of months ago told us that “[t]he possible election of Putin as the president of Russia will not signify a fundamental change in the direction of U.S.-Russia relations.”  They might still be right: Putin the president may well reject verbal excesses of Putin the candidate and return to pragmatic approach to foreign policy so characteristic of his first presidential term.  But in politics, words matter – even if told in the heat of election campaigns.