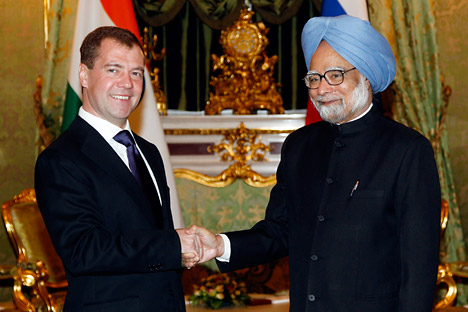 At the meeting, which lasted two hours instead of one, Manmohan Singh and his Russian counterpart discussed a range of issues regarding Indo-Russian partnership.

One of the most important questions on the agenda was the nuclear cooperation, and in particular the joint project of Kudankulam nuclear power plant in Tamil Nadu.

However, India and Russia did not sign any agreement for the third and fourth units of the plant yet.

Manmohan Singh also commented on the nuclear safety aspect which had aroused concerns among local residents due to the recent Fukushima situation.

“There are certain problems due to providing nuclear safety and possible impact of the nuclear power station on the residents,” Dr. Singh said. ”But I’m sure that our nuclear programme is safe, and together with Russia we’ll convince people that there are no reasons for worrying.”

During Indian Prime-Minister’s visit to Moscow Russia and India signed a package of documents, including the document on supplies of additional sets’ for fighter jets’ assembling.

After the meeting the sides signed the protocol to the intergovernmental agreement of 2000 on rendering technical support in the organization of the Su-30 MKI aircraft production. The document envisages supplying additional 4 components for the licensed assembling of Su-30 MKI aircraft – multifunctional fighter jets, which became the flagship of the Indian air forces.

Dr. Singh’s meeting with President Medvedev continues the tradition of the annual exchange of visits on the higher level. A year ago Russian President visited India, notably, New-Delhi, Agra and Mumbai. This is the first meeting of the two leaders after their contacts during the BRICS and “Big-20” summits.

India is a leader among the biggest importers of the Russian military and technical production since 2007, which was the first time when India surpassed China in the defense sector imports.

The military and technical cooperation programme envisages 10-year lease of the nuclear submarine “Nerpa” by the Indian navy, modernization of the aircraft carrier “Admiral Gorshkov” (which will be rechristened INS “Vikramaditya” after the planned fundamental modernization), supplying of a new set of 3 frigates. Russia also concluded a contract with India for the deck-based fighters MiG-29K.

Russia and India also signed the exchange programme in the education sphere.

Also a memorandum of understanding (MoU) between the Federal Antimonopoly Service of the Russian Federation and the Competition Commission ofIndia was signed.

President Medvedev and Dr. Singh also signed the joint statement on the further strengthening of the Russian-Indian strategic partnership in face of the challenges of the changing world.