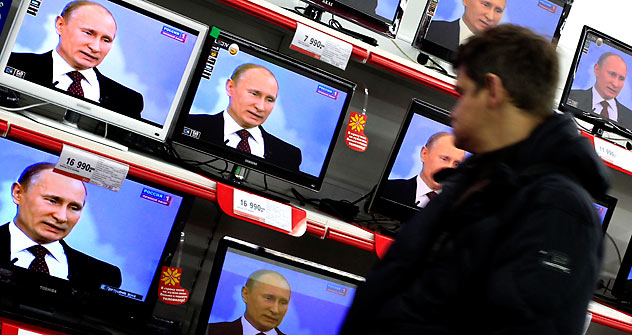 Vladimir Putin’s annual question and answer session was more like a report than the launch of a presidential campaign.

The call center staff who received phone calls, text messages and emails with questions for Prime Minister and presidential candidate Vladimir Putin’s annual call-in session with the Russian public estimated that many of the questions would deal with economic and social problems, allowing the prime minister to demonstrate that life in Russia has become significantly better. But when the hotline opened on Dec. 15, many callers wanted to discuss the outcome of the last two weeks: the Dec. 4 State Duma elections and ensuing protests.

“Moving towards liberalization is necessary”

"The opposition’s goal is to fight for power,” said Putin. Without acknowledging or denying evidence of vote rigging, he argued that the outcome of the Duma elections reflects the real balance of power in the country. The main objective of the protests, in his view, is to influence the results of the presidential elections, which will be held on March 4, 2012.

"I ask the Central Election Commission to install web cameras in all polling stations to completely eliminate all fraud on this score,” Putin announced preemptively.

Putin also answered a few other questions related to the events. The prime minister said he was “amused and even pleased” by a controversial photograph of an obscene remark written on a ballot, which resulted in the firing Maxim Kovalsky, editor-in-chief of “Kommersant Vlast” magazine.  The photo was taken in London, and in reference Putin said: "We know who gathered in London…As long as I sit here, they can’t come back,” he said, apparently referring to Russians living in London who face criminal prosecution in Russia.

Turning to domestic issues, Putin admitted that he was personally responsible for the current system of appointing regional governors rather than having them be elected by their constituents. Putin explained the necessity of this measure in the early 2000s when the country risked collapse, and because of the selfish interests of some regional leaders.

Now, he said, the government can again consider the direct election of governors, but “keep the filter” at the presidential level.

Putin’s proposed new model involves the nomination of governors by regional legislatures, their approval by the president, and direct elections by the whole population of the region. This would allow the president to retain his authority to dismiss governors at will.

Similarly, he suggested electing members of the Federation Council, the upper house of parliament.

Putin recognized that “our multi-party system is in its infancy” and “moving towards liberalization is necessary.”

Asked about the prospects of billionaire Mikhail Prokhorov in the presidential elections, Putin said, “I don’t want to say that I wish him success, but he will be a strong competitor.”

“Russia is not a bridge”

Some questions concerned Russia’s role in the world, in particular the prospect of establishing a Eurasian Union of some of the former Soviet states. In reply, Vladimir Putin mentioned the problems of the European Union, which could be taken to mean that he is in no hurry to reconstruct the Soviet Union.

Film director Nikita Mikhalkov, who is strongly in favor of the idea of Russia’s special role as a Eurasian state, directly replied that Russia is not a bridge but a self-sufficient country. The Eurasian factor is a supplement to be used.

“Why are Russia and the West still at odds with each other?” German political scientist Alexander Rahr asked Putin, recalling that after the collapse of the Soviet Union, few doubted that Russia would quickly integrate into Europe.

Putin said that the first reason involves the “hugeness” of the country, which “everyone fears.” But then he spoke in more detail about the role of the United States, which “still has suspicions about our nuclear potential.”

“It’s impossible to remove this potential and then treat us as an ally,” he said. Suspicions from the past prevent the development of relationships. Promising to build these relationships nonetheless, Vladimir Putin was quick to note that, “America doesn’t need allies, but vassal states.”  He recalled how the Soviet Union “tried to impose its will on its so-called allies,” and what was the result of it, and suggested the U.S. would come to the same result.

But Putin ended the conversation on foreign policy issues peacefully. “[Russia] needs to intimidate its neighbors less,” he said.

The question of building bridges arose again when the discussion turned to economics. Putin reminded his audience about the infrastructure project that will link rail transportation to Europe and Japan.  To do so, a bridge must be built between the mainland of Russia’s Far East and Sakhalin Island, from which a tunnel will be dug to the Japanese island of Hokkaido.

This was Vladimir Putin’s 10th live conversation with citizens. These events are held annually in December, when Russians are preparing for the New Year’s and Christmas holidays. In past years, Putin gave some valuable gifts.  A few years ago, during the call-in, a woman called from Nizhny Novgorod to complain that local authorities had decided to close baby food distribution centers. From the studio, Vladimir Putin overturned the mayor’s decision. Then there was a girl from Siberia who asked for a holiday dress and got it. Another girl wanted to visit the Christmas tree at the Kremlin, and she got her wish.

This year, however, the prime minister didn’t give anything away.