Where Amur connects Russia and China 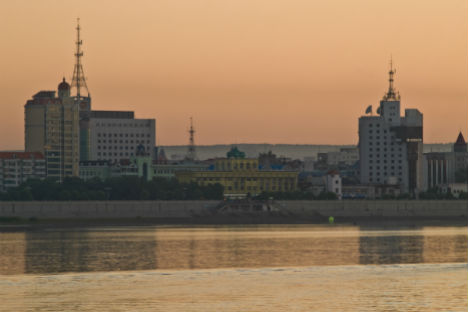 Blagoveshchensk, view to the Chinese city Heihe across the river. Source: Lori/Legion-Media

The fates of Blagoveshchensk and Heihe, the two cities located on the banks of the Amur River separating Russia and China, have become entwined, with trade, investment and tourists flowing across the once contested border.

While taking a ride on a trolley bus, it’s difficult to imagine that two decades ago, the Amur River that separates China from Russia was a fortified border, a kind of iron curtain between the two communist countries. Chinese tour groups now walk past antique wooden houses and pre-Civil War architecture that sets Blagoveshchensk (literally meaning good news) apart from other cities in the region. Despite the troubled history between the people on both sides of the river, Blagoveshchensk and Heihe, a modern city on the Chinese side of the river, now reap the benefits of such proximity.

A free trade zone was established between the two cities in the mid-1990s and now visa-free day trips are allowed for Russians across the border. Several ferries ply every day until the top layers of the river freeze over, making buses the only way to cross the Amur. While Blagoveshchensk is now a popular attraction for casino-crazy Chinese, Heihe was one of the first places from which Russians undertook the “suitcase trade.” The relationship between the cities has morphed over the last decade. The lights of fast-developing Heihe glare over the Amur riverfront in Blagoveshchensk with several night clubs, restaurants and massage parlours being popular among Russians from the other side of the river.

Blagoveshchensk is still a city that is dominated by the late 19th and early 20th century wooden houses and pre-civil war buildings. The city was on the stopover list of legendary Russian writer Anton Chekhov, when he was on his way to Sakhalin. Another prominent guest was Nicholas II, while he was the crown prince of the Russian Empire. The Soviet-era housing blocks are conspicuous in the city by their absence.

Prosperity in China has triggered a boom in the Russian city. The most modern-looking building in the city is the Asia Hotel, which was built by a Chinese businessman. Most of the popular hotels and restaurants in the city offer a “China view.” The city also has a Confucius Institute. Of course, this is in stark contrast to the skyscrapers on the other side of the river. Being an international gateway, the Russian government is spending over $200 million to redevelop the waterfront of the city.

While the modernity of Heihe looks impressive, long-term residents of Blagoveshchensk are ready to call China’s bluff. “Heihe was nothing but a tiny village 10 years ago,” says Marina Leonteova, a Russian-Chinese freelance translator. “Travel 20 minutes away from the city and all you will see is a primitive Manchurian countryside, with little to show...We are not talking Shanghai and Beijing here.”

The territories in the region have been deeply contested by Russia and China over the last few centuries. It wasn’t until 1856 that China officially signed away parts of what now constitute the Amur Region to Russia. While the population of the Amur Region is now down to under a million, the Heilongjiang province in China has more than 40 million inhabitants.

Like in most parts of the Russian Far East, there are fears of a demographic swamping of the Amur Region by Chinese immigrants. “As a student of Chinese culture and history, I can tell you that the day is not far when China will call the territories signed between the Qing Dynasty and the Russian Empire as unequal,” says Leonteova. “Look what happened with Hong Kong and Macau.” However, on the other side of the river, where streets signs and name boards of bars, restaurants and shops appear in Russian as well as in Mandarin, such talk is dismissed. Local officials in various Chinese border regions with Russia feel that the border dispute was a closed chapter and that fears of a “Chinese colonisation of the Russian Far East” were unfounded. China and Russia signed a treaty in 2004 where China was handed the Tambarov Island half of the Bolshoi Ussuriski island, both on the Amur River, as a final settlement to the border dispute between the countries.

What would set these Far Eastern twin cities apart from Windor, Ontario and Detroit, Michigan is the fact that there isn’t a single bridge connecting Blagoveshchensk and Heihe. It wouldn’t be difficult to guess which side has been resisting attempts to connect the two countries with a modern bridge.  Meanwhile, China imports coal, timber and natural resources from the Amur Region, while Russians living in Blagoveshchensk buy just about everything from clothes to skiing gears from the other side of the river.

Ajay Kamalakaran was the editor of the Sakhalin Times in Yuzhno-Sakhalinsk from 2003 to 2007.