Russia enters WTO: A protocol and a t-shirt for 18 years of work 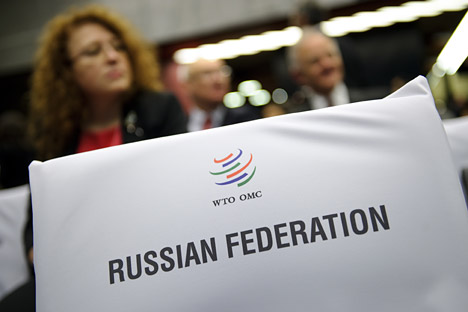 The WTO accepted Russia to its company. Source: AFP / EastNews.

The World Trade Organization is ready to admit Russia to its company.

On Dec. 16, the ministerial conference of the World Trade Organization meeting in Geneva confirmed the protocol for Russia’s WTO membership.  Now the only step remaining for Russia’s accession is an approval of the protocol by the Russian State Duma within 220 days. The decision by the ministerial conference brought to an end 18 years of negotiation.

Russian President Dmitry Medvedev thanked all who participated in the years of talks, and said that he regarded this event as an important achievement for Russia and its trade counterparts. For his part, WTO head Pascal Lamy gave t-shirts to the leaders of the both working groups.

While Maxim Medvedkov, the head of the Russian delegation got a t-shirt with the caption “Welcome to WTO, finally,” his European counterpart Stephen Johannesson had a shirt that read: “Mission accomplished.”

Now the ball is in Russia’s court. By the end of the summer, the State Duma must ratify the protocol for the country to officially become a WTO member.  However, two of the four parties in the Russian parliament – Just Russia and the Communist Party – recently announced that they would vote against Russia’s accession to the organization. Just Russia refused to comment on the situation, while their communist counterparts claimed that WTO membership would not be beneficial for some sectors of Russia’s economy.

“This will result in serious problems in the agricultural field and real collapse of all processing industry,” said Vladimir Kashin, one of the deputy leaders of the Communist party. Nevertheless, the votes of the other two parties in the Duma – United Russia and the Liberal-Democratic Party of Russia (LDPR) will be enough to ratify the protocol.

Russia’s gradual integration into the WTO is expected to take place over 10 years. However, Russian businesses and foreign companies operating in the country have already begun preparing for the market liberalization and a decrease in customs.

“The invitation to join the WTO put Russia closer to the observance of international principles and standards in the world trade.  The agreement [regulating Russia’s accession to the WTO] will give an opportunity to representatives of American and other foreign businesses to get more transparency and predictability in the Russian market,” said Edward S. Verona, President and CEO of the U.S.-Russia Business Council (USRBC).

Sergei Kravchenko, CEO of Boeing’s operations in Russia and the CIS said that accession to the WTO will allow Russia to attract foreign investors to long-term projects. “So far, the fact that Russia hasn’t joined the WTO has been met with suspicions by many investors,” he said.  “For example, annually I give a presentation about [business] activity in the country before Boeing’s Board of Directors. And every time Russia’s status in the world trade community results in [numerous] problems and difficulties. Yes, we have plans to invest more than $20 billion and we have already invested $6 billion. But the WTO membership will allow us to be more confident in the investment stability and it is likely to increase our role in the world market.”

According to Kravchenko, in the long-term, Russia’s accession to the WTO will have an impact on the development of science. “Russia can become a place with a good scientific potential and export intellectual service and be a partner in devepping new technologies,” Kravchenko said.

This may be true in the long-term, but the increased competition is a major challenge for the near future according to Yaroslav Lisovolik, an economist and head of Deutsche Bank Russia.

Given the expected gradual decrease in tariffs and customs and their eventual cancellation on foreign goods, Russian companies will have to keep pace with their foreign rivals. Otherwise, they will be overshadowed in the world market. “It’s a good sign for bolstering the pressure that will result in an growth in efficiency among Russian companies and a price decrease for Russian customers.  The trade effects will be a result of the middle- and long-term consequences, while short-term consequences will indicate an increase in foreign investments and an inflow of portfolio investors,” Lisovolik said.