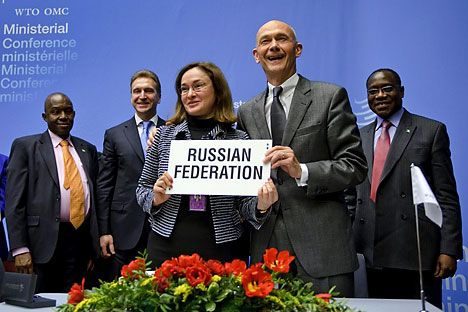 The WTO accepted Russia to its company. Source: AFP / EastNews

In Russia’s diplomatic calendar, 2012 promises to be a landmark year when Moscow will chair the Asia-Pacific Economic Cooperation (APEC) summit and become the last APEC member country to join the World Trade Organization. According to experts, membership in the WTO is desirable for a country chairing the APEC. In addition, it will open the doors for wider economic cooperation with the East.

With Russia’s WTO accession, the organisation becomes “a completely universal institution,” says Alexei Portansky, head of the Information Office on Russia’s Accession to the WTO. Russia remains the largest economy outside the WTO, and since the organisation has brought together over 150 members, for Russia this is “eliminating the gap.” According to him, the entry into the WTO will not only pave the way for Russia to join the ECO (Economic Cooperation Organisation). It is impossible to join ECO without the WTO membership, but it is also in a sense a necessity for the Russian APEC presidency. “Formally, it is possible [APEC presidency without WTO membership], but it’s inconvenient, since all of APEC’s member countries are already WTO members and have long played by those rules and have all the rights of WTO members. Now we will be equal with them.”

Russia takes over the APEC chairmanship from the US, which led the organisation in 2011. According to Portansky, during this time, the US reduced its activity at the global level, i.e. in the WTO, and started to pay more attention to regional developments, including in the Asia Pacific Region. But Russia will step up activity on both the regional and global levels.

The main areas of negotiation within APEC will be the legalisation of trade investments, information policy, innovation partnerships, and transport (logistics and customs procedures). Russia’s WTO accession will certainly help improve these processes. “The WTO membership in itself improves a country’s investment climate, and that’s an important guarantee for foreign investors,” says Portansky. “However, we should not expect a sharp increase in investments after the WTO accession,” he said.

“Almost from its inception, APEC’s stated purpose has been to create a free trade zone for member countries, and to do so it’s very important to create a system of uniform standards and regulations,” remarked Alexander Fedorovsky, head of the Asia-Pacific Department at the Institute of Global Economy and International Relations of the Russian Academy of Sciences. In May this year, an agreement was reached between China, Japan and South Korea for the establishment of a free trade zone for the three countries. In September, work began on a cross-border free trade zone on the border between Russia and China, near the city of Suifenhe. In addition, the opening of a joint free trade zone between Russia and New Zealand is starting to take shape. This process has been earlier hampered by the fact that Russia was not a WTO member. However, the task of creating such a zone for all APEC countries has not yet been accomplished. In this context, Russia’s entry into the WTO is an important step towards this goal.