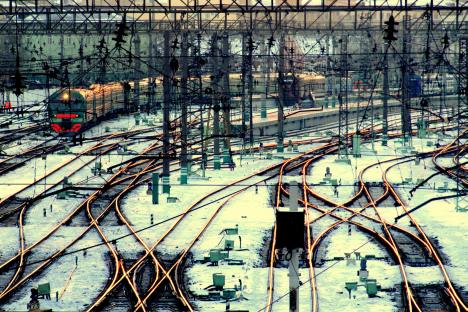 End of the line: transport networks built in the Soviet era are in need of modernisation. Source: Getty Images / Fotobank

An ambitious programme to remake or modernise the crumbling Soviet-era roads, railways, bridges and ports is under way.

Between $60 billion and $65 billion is being invested each year on major renovation projects across the country – not that you’d notice if you visit Russia’s regional capitals, which still look drab and run-down, bar a few brightly coloured billboards. That’s because most of the money is going into transport and power systems – the lifeblood of this vast but largely empty country.

Infrastructure investment in Russia in 2010 reached $111 billion, according to a report by Morgan Stanley, a 10-fold increase from the $7 billion  spent in 1999.

Commentators regularly attack the Kremlin’s “spending frenzy”, claiming it has driven up the oil price needed to balance the budget to over $125 a barrel – from $21 in 2007, based on Citigroup figures. But they don’t seem to acknowledge that, rather than propping up struggling factories or paying public servants, the money is going on much-needed infrastructure projects. And, when set against the rapidly expanding economy, the spending splurge is not that much: as a share of GDP it has doubled from 3.5 percent of GDP in 1999 to 7 percent in 2010 – slightly ahead of India’s 6 percent, but well behind China’s 11 percent.

The real boom in infrastructure spending, though, has not even begun. A host of mega-projects are being prepared that will push the spending even higher over the next couple of years.

Among the biggest projects planned are the development of the Vankor oil and gas field, the biggest find in Russia in the past 25 years; the Ust-Luga port in the Gulf of Finland that will be the biggest warm-water port in Russia; the reconstruction of the Black Sea resort of Sochi ahead of the 2014 Winter Olympics; and the construction of the East Siberia-Pacific Ocean (Espo) oil pipeline.

Morgan Stanley estimates that a total of $500 billion worth of infrastructure projects are underway or about to start. “Based on our major projects database, we see a steady $60 billion - $65 billion  [per year] flow of infrastructure capital expenditure on major projects, and a new generation of mega-projects under development, including high- speed rail, new federal highways, the Moscow transport hub and further development of the Yamal oil and gas province,” says Jacob Nell, chief economist of Morgan Stanley and author of the report.

To sustain this high level of development, Mr Nell estimates state-owned companies will have to raise another $28 billion  a year to finance the work – about as much as Russia attracts in foreign  direct investment.

What is odd is that much of this work has gone unnoticed. This is partly because the spending has not had much impact on the country’s growth or overall investment – both are now lower than before the financial crisis began. And because the more opaque state-owned companies are in the front line, their spending is harder to see than federal budget spending or privately funded investment.

But perhaps the biggest factor is that, unlike China and India, which were both largely agrarian economies, Russia inherited a lot of serviceable infrastructure from the Soviet era. In the boom years of the Seventies, when the workers’ paradise looked like it might actually happen, Kremlin spending on infrastructure averaged 40 percent of GDP a year. It was only in the Nineties that it fell away to next to nothing.

“Russia inherited significant elements of a modern industrial infrastructure from the Soviet Union, including an oil and gas industry, a mining industry, a railway network, a power network, and urban transport and municipal services. However, the infrastructure was often inefficient, and there were notable gaps, particularly in telecommunications and transport,” says Mr Nell.

Full ahead for shipping on Arctic short cut

A fleet of nuclear-powered ice-breakers is boosting trade by cutting the journey time for ships travelling between Europe and Asia.

Russia has opened up a new trade route that halves the distance between Europe and Asia. The Northern Sea Route goes round the top of Eurasia, rather than the traditional route via the Suez Canal, passing India and China. The sea along Russia’s Arctic coast freezes solid in the winter, which has made the passage impractical for commercial traffic until recently. But as Russia expands its fleet of nuclear-powered ice-breakers, traffic is increasing.

The first complete crossing of the route was made in 1878-9 by the Finnish-Swedish explorer Adolf Erik Nordenskiöld. It was a dangerous expedition then but the journey is becoming increasingly routine as Russia  seeks to increase trade between the developed and developing worlds.

Vladimir Mikhailichenko, executive director of the public partnership on co-ordination and operation of the route, said the number of ships making the journey had tripled this year to 33 from 10 in 2010. Cargo shipments via the Russian part of the Northern Sea Route were expected to rise to 800,000 tons in 2011 from 145,000 tons in 2010. The increase is partly due to the Kremlin’s decision to cut transport duties, which were between four and six times higher than that of the Suez Canal last year.

One of the most important cargoes is fish, shipped from Russia’s Far East to St Petersburg. “Transporting fish by sea is more efficient than by railway,” Mr Mikhailichenko quipped.