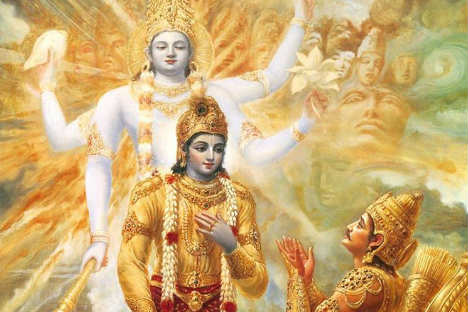 A day after Indian Prime Minister Manmohan Singh returned to New Delhi from a successful bilateral summit with Russian President Dmitri Medevdev, several newspapers in India reported that the Hindu sacred book The Bhagavad Gita faces the prospect of a ban in Russia. The misleading headlines, including “Bhagavad Gita faces “extremist” branding in Russia” and “Extremist Bhagavad Gita faces ban in Russia,” seemed to have been timed to perfection. Instead of the Indian people reacting positively to a fresh momentum imparted to the Indo-Russia relations, India woke up on a cold wintry Sunday to headlines making Russia look like an anti-Hindu country.

A casual scrutiny of the articles will help any reader understand that prosecutors in the Siberian city of Tomsk (of all places on this earth!!!) want a version of the Bhagavad Gita, published by the International Society for Krishna Consciousness (ISKCON) banned. The matter has been sub judice since June but for very strange reasons the news appeared in most Indian dailies only after the Indian prime minister left Moscow. The reports flashed on Sunday newspapers across the country, however, make no mention of the working of the Russian legal system. Have they bothered to even find out if a court in Tomsk can ban the book across Russia?

The followers of ISKCON or the Hare Krishna sect are spread out across Russia, but not all Russians who follow some form of Hinduism are members of the sect. Russia has several followers of the Sathya Sai Baba and practitioners of sects like the Brahmakumaris. I have personally seen several versions of the Bhagavad Gita in different parts of Russia. While I am not a religious person, not once in four years I spent there did I ever feel that I didn’t have the freedom to practise Hinduism in Russia.

While I am not qualified to give an opinion on the Hare Krishna movement, it’s the issue of the group’s proselytisation that seems to have bothered some practitioners of Orthodox Christianity in Russia. While many Hindus in India abhor missionaries who come to India to convert people, they fail to see parallels in their co-religionists going abroad for the same reasons.

There was once a furore in India over another well-timed media report where a priest from an Orthodox Church in a small provincial town called Krishna ‘the devil.’ While the Russian Orthodox Church refused to endorse the views of the particular priest, the Indian media couldn’t get enough of the comments.

Russia is a country that has always been friendly to India and Indians. Many Indians talk of natural warmth they experience when they are in Russia, something that isn’t common in the West. India also enjoys tremendous soft power in Russia and the former Soviet Union; something that existed long before the country became ‘fashionable’ in the West. So who benefits from misinformation being spread among Russians and Indians?

Could it be the same set of people who seem to have a stake in the prolonged delay at the Kudankulam Nuclear Power Plant? For 65 days, “poor farmers and fishermen” have been agitating against the Russian-built power plant. How can these poor people afford to support and feed their families without an income for two months? Is it possible that their loss of daily earnings is being compensated from an ‘external source?’ This is something that the Indian government has finally started to think about. Media reports in several publications suggest that the Intelligence Bureau has started to probe the sources of funds for the protestors in the villages near the plant. A protest by residents and industrialists in Coimbatore, Tamil Nadu in support of the plant was, however, ignored by the media. The protestors numbered around 3,000, but their protest could only last one day since ‘NGOs’ and foreign governments perhaps were not ready to sponsor them.

The small yet powerful anti-Russia lobby in India is working on an overdrive to destroy the warm and time-tested political and people-to-people relations that India and Russia share. They have a subtle modus operandi. Label any pro-Russian in India as a “communist” or “JNU type.” Use the media and even Bollywood to attack Russian interests. Why did the Bollywood film from 2006, ‘Rang De Basanthi’ single out MIG aircrafts in the closing credits? Could some of MIG’s competitors have played a role in the mention after the emotional film?

There is an old Russian proverb that says “Старый друг лучше новых двух (Stari drugh luche novikh dvukh),” which literally translates as “An old friend is better than 2 new ones.” Even as the Gita controversy rages on, Russia and India ease visa norms for each other’s citizens, the countries support each in international diplomatic forums and have a convergence of interests in Central Asia and the Middle East. This doesn’t go well with those that benefit from a manufacture friction between these countries, so brace yourselves for more mountains to be made out of molehills.