India-Russia partnership: continuity in the midst of change 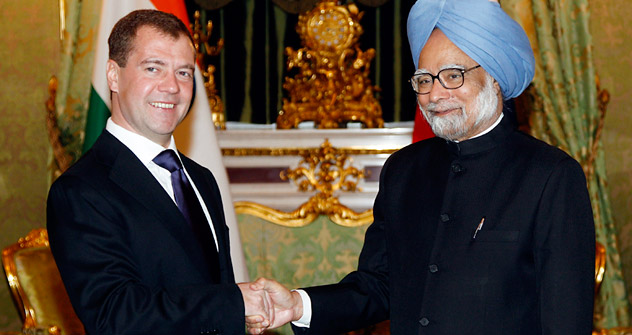 The 12th India-Russia summit, concluded on 17 December 2011, keeps the hopes of protagonists of a strong India-Russia relationship in a changing world alive.

The mechanism of annual summit, a mechanism which perhaps exceptionally India and Russia execute annually at the highest level, might not spring surprises but undoubtedly it led to things which can be seen in a positive light, thus siphoning away much of negative crust that has gathered in bilateral relations over the past years. Besides signing five deals during the visit, the joint pronouncements on various issues including Afghanistan, nuclear plant issue, economic cooperation, democratization of international relations are not something to be viewed in a negative parameter rather need to be seen as something positive which both the countries have evolved over the years. One thing is certain that India and Russia have shed much of negativism that had affected their relations aftermath of the Soviet collapse; both the countries have recognized emerging imperatives of the world order and the required cooperation while diversifying relations in the wider ambit of mutual benefit and friendship. This time the deliberations and pronouncements did not appear extravagant, but it did point out the maturity in the relations.

Indian Prime Minister Manmohan raised the issue of democratization of international relations during the summit. The emergence of groupings like BRICS and G-20 further testify the resolve of the both the countries, well reflected in the bilateral Strategic Partnership document signed in 2000, towards ushering a world order in which multilateralism rather than unipolarism or biploralism will be the mainstay. Both the countries have played key roles towards advocating free and fair play in international regimes and democratization in decision making of international financial bodies like International Monetary Fund and World Bank. The argument that India has slid from its non-alignment foreign policy and heavily tilted in favour of a US led world order is, on close scrutiny, does not appear full proof. There are many such instances when India openly advocated policies which did not go in sync with US objectives in the region or in the world. Whether in case of Iraq (India had refused to supply forces to fight Saddam’s forces), or in case of Iran, or even Syria in the ongoing turmoil (India has strongly supported the Russian initiated draft to resolve the crisis), or in case of US policies towards Afghanistan, India has not played the role of seconder or mute approver of the policies of other countries including the US. It is rather a dynamism of cooperation vs. competition that has governed the relations, not only between the US and India, but also between many other countries.

One thing that needs emphasis in the context of India-Russia relations that the kind of cultural and political capital that the both countries enjoy or have accumulated since past is perhaps not found in the relationship between any other pair of countries. That should not be the sole basis of comfort in relations, as economic relations play a critical role, but it is nonetheless needs emphasis that this subtle base provides a soothing plane and assures the protagonists of strong relations hopes of synergizing of relations in other areas including economic. It is no wonder, hence, last year during his visit to India to participate in the annual summit, President Medvedev visited Mumbai and met with Bollywood artists including Karina Kapoor, the granddaughter of legendry Raj Kapoor, who during Soviet days played a cultural bridge in bilateral relations. The political component is equally enriching. Whether Russia supporting India’s candidature for permanent membership at the United Nation’s Security Council, or India’s candidature for permanent membership at the Shanghai Cooperation Organization, or jointly evolving common approaches on issues of extremism and terrorism, or on Afghanistan and Central Asia, it is no diminutive achievement in India-Russia relationship over the past decade.

On the issue of Afghanistan, Manmohan Singh argued that in a post-NATO Afghanistan, India and Russia have to play crucial roles to maintain peace and stability in the region. As players in the wider Eurasian region, both India and Russia are stakeholders in peace and stability in the region, and towards developing a common approach so that menaces like extremism, terrorism, and drug trafficking are controlled. Singh emphasized, “As far as Russia and India are concerned, even after the American and other International Security Assistance Forces pull out of Afghanistan we have to recognize that Afghanistan happens to belong to a region where we all reside … Therefore whatever happens in Afghanistan is of deep interest to Russia, is of deep interest to India and deep interest to all the neighbours of Afghanistan.”

In the context of economic cooperation, which is the area in which both the countries need to pursue a proactive policy to realize the volume of bilateral trade of $20 billion by the year 2015. Prime Minister Putin pointed to Manmohan Singh that there are about 400 projects in which both the countries have joint stakes. A lot has been said about the nature of fragile economic relationship, but the point is how to boost it. It is but imperative to diversify the relationship other than arms and armaments, and more importantly it is crucial to involve private players by providing level playing field and by winning trust and confidence of players from both sides. The problem can be formulated thus: how to diversify the economic relations other than arms and ammunitions? How to involve private players from both the countries? How to disseminate information about business prospects and provide needed avenues for investment without harassment? Besides, it is equally important to fulfill all the commitments made by either country to each other. During the summit, India placed an order for 42 Sukhoi-MKI 30 jets.

Indian Prime Minister assured that the Kudankulam plants, particularly Unit I, will be made operational within weeks. It is the vested interests and political compulsions that made the operation of plants delayed. While India’s great scientists like APJ Abdul Kalam after a visit to the plant declared that it is safe and can be made operational, the detractors of the plants, motivated and prompted by vested interests and also vote bank politics, made the process delayed. However, Indian government’s assurance during the summit needs to be taken seriously. Regarding Unit II of the Kudankulam plants, the Indian sources hoped to go forward on it within six months. Singh observed, the two sides have concluded negotiations and agreed on the terms and conditions for the Russian credit for Units 3 and 4 of the Kudankulam nuclear power project. Both the countries also concluded negotiations with regard to Glonass satellite system being put into orbit by Moscow as an alternative to the West-controlled GPS system. The two sides also agreed that an Indian group will explore the prospects of a comprehensive economic cooperation agreement (CECA) with Belarus, Kazakhstan and Russia for furthering multilateral trade. Hence, it will not be meaningful to say that India-Russia relations are being ossified or being subject to caprices of other powers. It can be described as relationship which is moving in slow steps but which needs to move faster.

In sum, India-Russia partnership can be a described in the paradigm of continuity amidst change. President Medvedev during the summit rightly observed that approaches of both the countries on many of current international issues are ‘congruent,’ as reflected in the joint statement. In the evolving world order which is characterized by ‘turbulence’ and ‘uncertainty’, the partnership has evolved with both countries appreciating each other’s concerns, while keeping the primary determinants of the relations unchanged. There are many lacuna and gaps, some yawning, but those are the gaps which need to be bridged and cemented in a framework of friendship and mutual benefit.