Is it still a one-horse race? 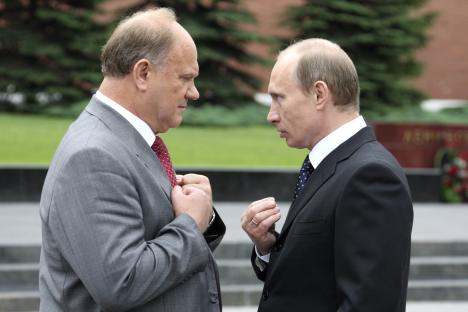 Have any of the new presidential candidates got what it takes to win the 2012 election? Russia Now examines their prospects.

When Vladimir Putin announced in September that he would run for president in next year’s election, no one doubted he would return to the position he held between 2000 and 2008. The dominant figure in Russian politics for more than a decade, he had enjoyed high approval ratings as both president and prime minister.

But the poor showing of United Russia in the recent State Duma elections and subsequent street protests seem to have thrown a spanner in the works. “People are demanding more respect from the authorities,” says Andrei Ryabov of the Carnegie Centre in Moscow.

Aside from United Russia, there are six nationally registered political parties, but there are no obviously strong presidential candidates in any of them. While covering a diverse set of political viewpoints, from nationalist to liberal, none has widespread appeal among the voters.

The Communist Party of the Russian Federation (CPRF) is the most credible opposition, with a membership of more than 180,000. Its candidate has been second in every presidential election since the fall of the USSR, with the party leader Gennady Zyuganov losing the first-round vote to then-President Boris Yeltsin in 1996 by a margin of just 3 percent.

Though the CPRF has attracted high-profile candidates opposed to the ruling regime, they have generally lacked ideological credentials. It has also failed to modernise: unlike the Communist Party of the Soviet Union after 1956, it officially celebrates Stalin’s rule.  Mr Zyuganov, 67, has headed the party since 1993, but now relies mainly on protest votes for his popularity. Announcing his intention to run for president earlier this year, he said: “A gang of folks who cannot do anything in life apart from dollars, profits and mumbling, has humiliated the country.”

Just Russia, a party widely rumoured to have been set up by the Kremlin in 2006 precisely to take votes from the Communists, also appeals to a left-leaning electorate with promises of a new socialism of the 21st century. Leader Sergei Mironov was speaker of the upper house of the Russian parliament from 2001 to 2011. Previously a staunch Putin supporter, he also announced his intention to run for president earlier this month.

Another long-standing political heavyweight is Vladimir Zhirinovsky, head of the Liberal Democratic Party of Russia (LDPR) since its inception in 1991. While the party has positioned  itself as anti-government with several nationalist slogans, it has voted in favor of practically every major government initiative.

The remaining parties – liberal-leaning Yabloko, Right Cause and Patriots of Russia – only have single-figure approval ratings so could not be credible competition, although Yabloko will field a candidate in the shape of the economist and intellectual Grigory Yavlinsky.

“A drop in oil prices could be enough to turn these political leaders into genuine opposition [candidates],” says Mr Ryabov. “However you feel about Zyuganov, Zhirinovsky and Mironov – they’re professional politicians. They understand how society feels and know how to react. Look at Eastern Europe in the late Eighties: previously loyal political parties in East Germany and Poland split with the government, and some of them came to power.”

Not everyone is waiting for the parties to modernise. Mikhail Prokhorov – Russia’s billionaire owner of the New Jersey Nets – recently announced his desire to run for the country’s top office.

For most of the past decade, big money had stayed out of Russian politics. Maybe too many dashes. But this year Mr Prokhorov joined the Right Cause political party – designed to appeal to a liberal-leaning, urban electorate – and announced his intention to take Mr Putin’s job as prime minister. Then he was voted out of the party after having spent millions of his own dollars on billboards and promotions across the country.

Mr Prokhorov’s announcement that he would be running as an independent caused a stir in the media – especially after Mr Prokhorov promised to release the jailed oil baron Mikhail Khodorkovsky if he was elected.

Another widely-circulated name is the lawyer-turned-anti-corruption blogger Alexei Navalny, described as “the only electable Russian” by the opposition journalist Yulia Latynina. Mr Navalny rose to fame after launching a popular website exposing corruption in state organisations and companies.

One of his strategies was to buy a small number of stocks in state companies and use Russian investor protection laws to obtain information. However, Mr Navalny shocked both Western and Russian observers when he attended a Russian nationalist march earlier this year. He has denied any intention to run for president, and the polls – conducted in November by the Levada Centre – show that only around 1 percent  of Russians trust him.

While few doubt that Mr Putin will win the top job in the end, his relationship with the newly elected parliament and society is anything from certain. United Russia recently surrendered half of the parliamentary committee chairmanships, which it had controlled for four years, to opposition parties following the election results.

“If Putin doesn’t win in the first round of elections and has to face someone in a run-off, this will be a major signal from society that things need to change,” says Dmitry Babich, a political analyst at RIA Novosti.

“But I’m sure he’ll win in the second round. There’s not a single figure to unite the opposition like in 1991; there’s not even a few single figures who could agree between themselves.”