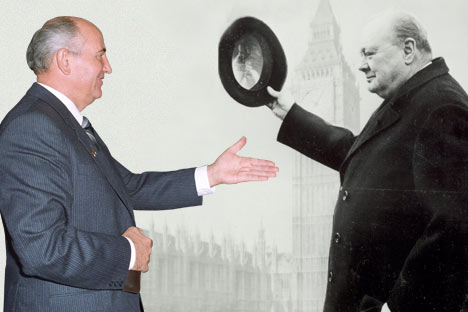 Gorbachev and Churchill were not contemporaries but if you switched their places in history, India may never have suffered a partition and the Soviet Union may never have collapsed

Personalities matter. It is tempting to disregard the role of a single individual against the tide of everything else. But from Galileo to Gandhi, it is the individual with an idea or an ideology that has shaped history.

Two such individuals are Winston Churchill and Mikhail Gorbachev. They were not contemporaries but if you switched their places in history, India may never have suffered a partition and the Soviet Union may never have collapsed. How so? Because of their remarkably different leadership styles.

Churchill is one of Britain’s most cherished leaders. He took the lead in standing up against Hitler, and inspired his people to fight against the Nazis during the Second World War. Britain eventually won the war, but Churchill lost the next election. He came back in 1951 but between those years the damage had been done – Britain had lost India.

One of Churchill’s controversial policies was towards Indian independence. He openly aired his dislike of Indians, and made it clear that the empire would not be lost under his watch. Both within and outside the British parliament, he worked hard to make sure India’s ‘swaraj’ dream would never be realized. He also lent momentum to Jinnah’s wish for Pakistan; once it became clear that India would eventually slip, it was better for Britain to have a strategic ally in the region to curb the Soviet-leaning newly independent state. The partition resulted in an estimated 500,000 deaths. Yet, it is described as a great political success in Britain because not a single British life was lost.

Gorbachev’s style was drastically different. When he took office in March 1985, the Soviet system was already imploding. The economic conditions would not allow for the arms race, the war in Afghanistan or the maintenance of the Eastern bloc. One by one, he began to drawdown from each. But soon party hardliners (the same conservatives who would eventually stage the August 1991 coup) began to question Gorbachev.

In search of greater legitimacy for his policies, Gorbachev opened the system up for political competition and freedom of information. The top-down pressure – of politics outside the sacred Party apparatus–and the bottom-up tensions–unleashed by the disclosure of facts like the Katyn massacre or the Nazi-Soviet Molotov-Ribbentrop Pact–crushed the Union. While Gorbachev did not intend to destroy the Soviet empire, he certainly did not intend to preserve it with the use of force. After all, it’s no small feat that the collapse of the world’s other superpower, a nuclear petro-state, was relatively bloodless. In that sense, Gorbachev resembles Gandhi, Churchill’s personal nemesis.

Had Churchill been appointed the General Secretary of the Communist Party in 1985, he may have indeed continued the usual suppressive policies, never letting the Berlin Wall fall or the Soviet Union disintegrate, at least under his watch. And in Churchill’s shoes, Gorbachev could have certainly been reasoned with to avoid the bloodstained division of India.

What is so ironic is that Churchill - coming from a reasonably democratic system - ruled India with an iron fist, and Gorbachev, a product of the Iron Curtain turned out to be more of a democrat for not only his own country but also its empire.