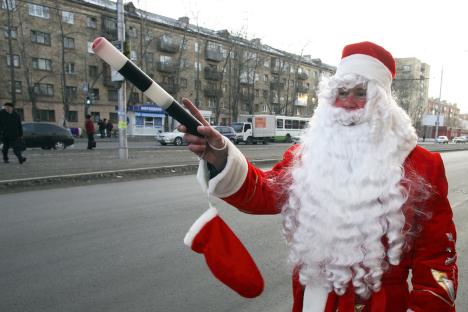 The magical character of Ded Moroz has succumbed to market forces since the end of the Soviet era, but his spirit of goodwill lives on.

Ded Moroz, or Grandfather Frost, as his name translates, was introduced as the hero of the New Year’s Festival back in the Soviet days.

When the atheist Bolsheviks took over Russia in 1917, they banned people from celebrating Christmas along with all the customs that went with it, such as decorating the fir tree. But years later, top party officials decided Russia could not do without a winter festival. They did not bring back Christmas but introduced New Year as the main festival – the first of which was celebrated in 1937.

By the Forties, New Year’s Day had become a very popular public holiday. Restrictions on the colour of Ded Moroz and Snegurochka’s outfits were gradually lifted, and Ded Moroz was free to wear red, blue or even silver and gold.

No one could imagine a  New Year celebration without Ded Moroz and Snegurochka. They organised all the New Year festivities in schools, universities and the workplace. In Soviet times, the local trade union committees – which were responsible for organising every aspect of workers’ lives – would convene to assign these important roles to suitable candidates. In the case of Snegurochka, it was the girl deemed to be the prettiest available.

The duo would appear on family doorsteps, bearing modest presents (subsidised by the trade unions) such as biscuits, mandarins and sweets. The children would sing or recite for their goodies, after which Ded Moroz and Snegurochka might sneak off with the adults for a stiff drink, especially if the weather was particularly bitter. Imagine the surprise when a child peeped into the kitchen, only to see Ded Moroz lift up his beard and down a vodka – while chatting to his father on matters of industrial productivity.

When the USSR collapsed, New Year’s Day remained the most celebrated festival, though Christmas could once again be celebrated.

Ded Moroz has grown in importance as the central figure of the winter festival and has even been given a permanent residence in the old Russian city of Veliky Ustyug 460 miles north of the Russian capital, where he can be visited throughout the year.

On December 24, joined by his granddaughter, he makes a grand entrance to Gorky Park in Moscow to start the New Year celebrations. Alongside this new tradition, special postboxes now appear in Moscow parks in December so that children can send their wish lists to Ded Moroz. If they provide an address, they will receive a “personal” reply.

Ded Moroz and Snegurochka are in great demand over the festival, which lasts until the Russian Christmas (celebrated on January 7) is over. Companies hire them to entertain their employees or promote products.

Of course, the official pair can’t handle all these engagements, so Ded Moroz agencies have stepped in to meet the demand. The price depends how close the visit is to New Year’s Day. For a  half-hour visit to a standard family home, the cost starts at 2,500 roubles (about $80) and rises to 15,000 roubles (around $ 500 ) – meaning that not all families can afford a visit. A two-hour appearance from the couple at a corporate event can cost up to $ 4,700. Wealthier clients can pay more for characters to join Grandfather Frost and the Snow Maiden. These might include a cunning fox, a grey wolf or a faint-hearted hare. If the price is right, they will even do a classical round dance around the New Year tree.

The Ded Moroz agencies claim they recruit only professional actors, with a certificate from the Ded Moroz Academy, but the characters are often students without special qualifications. Age is not a barrier. While big agencies prefer a Ded Moroz aged 30 or over, younger people are given the role, too.

Anton, 27, was hired as Ded Moroz by a food company for a New Year promotion when he was a final year student in Moscow who attended a drama circle. He had to persuade people in the street to buy a fizzy drink in return for prizes, such as a mobile phone – for 10 litres. “It was -20 centigrade: I had to jump and dance so as not to get cold, which greatly impressed the kids passing by – who were very happy to see me and took photos with me”,  he recalls.

But a corporate event for a big sound-recording company brought his Ded Moroz career to an end. “I had to divide the evening between the ordinary employees of the firm and the top management, who celebrated in a separate hall. While the managers were very happy with the entertainment I put on, the employees didn’t appreciate the presence of magic at their feast: they tried to tear off my beard, asked for alcohol and proved they don’t believe in wonders. I’ve refused to act as Ded Moroz ever since”, says Anton, now a manager himself.

Despite the opportunity to earn good money, the spirit of goodwill lives on with Ded Moroz. Some people work for free – like Ivan, 25, who played the character in a charity action and brought presents to orphanages. “The kids were very happy to see me and Snegurochka; they read poems for us and asked us to fulfil their wishes.

“I was very surprised that taxi-drivers and even the cars passing by offered us a lift for free – Ded Moroz is really greatly respected and loved”, says Ivan.

The best of Merry Moscow

FAIRS • Christmas fairs are popular in Moscow. The biggest is in Theatre Square, next to the Bolshoi Theatre. Gorky Park hosts the International Christmas Fair which, alongside Russian food and souvenirs, sells Belgian waffles, French mulled wine and Italian pasta, among other delights.

SKATING RINKS • Skating is one of the favourite winter pastimes in Russia: the fact that the first Russian Olympic gold medal was gained in figure skating is testimony to this. More than 20 skating rinks open in Moscow during the coldest months. The most famous opens annually on Red Square, and you can even spend New Year’s Eve on it. Other skating places, also very dear to the hearts of Muscovites, include the huge rink in Gorky Park, famous for its ice disco, and Patriarch Ponds.

ILLUMINATIONS • Every evening at 5.30pm, Moscow’s streets come alive with spectacular displays of festive lights. Much thought and planning goes into their design. This year, young designers and students at art colleges were invited to help create the imaginative displays.

ICE THEATRE • Russian Winter is not only a season, but also the name of a popular cultural festival held each year. This December, it hosted an ice theatre show, the first of its kind, performed daily on Ploschad Revolutsii (Revolution Square), 300 yards from the Kremlin. The characters of the Russian folk tale are spectacular ice sculptures, but they talk – so far in Russian only – and bring their story to life in a very lively manner.

MUSIC • Performances include The Nutcracker at the Bolshoi Theatre and concerts at the Moscow Conservatoire and by the Moscow Philarmonic Orchestra. Stars include Jos é Carreras, Anna Netrebko and Richard Clayderman, along with Russian female ensemble VIA Tatiana, who play retro pop.